More highways and better roads have topped the wish-lists of investors and businesses in Slovakia for the past two decades. But despite promises to build them coming from all sides of the political spectrum over the past 20 years, a cross-country highway linking the western part of the country with the east still remains unrealised. 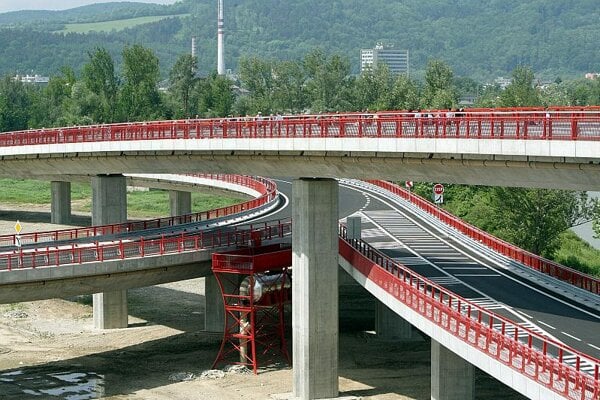 More highways and better roads have topped the wish-lists of investors and businesses in Slovakia for the past two decades. But despite promises to build them coming from all sides of the political spectrum over the past 20 years, a cross-country highway linking the western part of the country with the east still remains unrealised.

The government of Robert Fico, which ended its term in office in 2010 without delivering on its original highway promises, handed the challenge on to the government of Iveta Radičová. Minister of Transport, Construction and Regional Development Ján Figeľ has now tabled for interdepartmental review a plan for highway and dual carriageway construction for the period 2011 to 2014.
The minister says the plan, which among other things assumes a complete connection –with tunnels – between east and west by late 2016 or early 2017, is realistic. Ľubomír Palčák, director of the Žilina-based Transport Research Institute (VÚD), says it can be delivered if the state meets certain conditions, for example by allocating more money for highway construction from the state budget.

But Figeľ’s predecessor as minister, Ľubomír Vážny, remains sceptical, arguing that the government’s ambitions do not seem to have appropriate financial coverage, while tenders for highway construction are not properly prepared.

“Our intention is not to create the illusion that with a limited volume of public finances we can build everything in a very short time,” Figeľ said in an official statement. “We want to offer the public real dates for starting and finishing particular sections.”

Among the scheme’s priorities remains the completion of the D1 highway connection between Bratislava and Košice, specifically the missing sections between Žilina and Prešov. The completion of most of the missing 75-kilometre section from Dubná Skala to Svinia is realistic by the end of 2014 and all of it by 2015, the ministry said.

However, completion of the Turany-Hubová section might stretch beyond that date as the European Commission requires further assessment of the environmental impact on the NATURA 2000 territory, and without EC approval it will not be possible to proceed, the ministry said.

The programme assumes the launch of construction of the most difficult section of the D1, the Višňové tunnel near Žilina, at the beginning of 2012, which it says could be completed by late 2016 or early 2017. Construction of the tunnel is the main element delaying completion of the entire cross-country D1.

Another ambition is to start construction of most of the missing sections of the D3 highway connecting Žilina with the Slovak-Polish border. Preparation of the most important sections of this route has been blocked by legal and ownership disputes, according to the ministry. The programme also places high importance on key sections of the R7 dual carriageway connecting Bratislava with Lučenec via Dunajská Streda, Nové Zámky and Veľký Krtíš, and on the D4 Bratislava bypass, which should ease the burden on the capital’s existing road system.

The Transport Ministry wants to obtain funding from European funds, the state budget, European Investment Bank lending, revenues from the highway toll system, as well as from highway bonds. The main sources of money will be EU funds allocated under the 2007-2013 financing period and the state budget.

“In my opinion it is a plan which could be realistic, providing certain conditions are met; as the material points out, [these conditions] are that there will be some additional funds allocated from the state budget in the upcoming years,” Palčák told The Slovak Spectator.

The second very important aspect, according to Palčák, is that the tenders are performed in the planned time without any extra complications.

“I would note, though, that no government to date has managed since the establishment of an independent Slovakia to meet the obligations they defined – regardless of whether this happened due to political or economic reasons,” Palčák has said.

“Of course, I could imagine an even higher number of kilometres, but I think we can be happy even with this, if it is completed,” Palčák added.

As for financing for the projects, Palčák said that the government made a political decision to cancel the first and third public-private partnership (PPP) packages and decided to rely more on financing through European Union funds.

“The fact is that each method of financing has its pluses and minuses and I regard it as a political decision which the government was entitled to take,” Palčák said. “I personally think that it is good that they did not completely abandon PPP projects and that sections of the future D4 and R7, where in the future intense traffic is expected, are suitable for this form to be applied there.”

Based on the ministry’s new programme, former minister Vážny concluded that after halting the PPP projects designed under his government, and pausing highway construction overall, the government has focused on projects which are not ready for public procurement. He told The Slovak Spectator that projects such as the R2 in Žiar nad Hronom and the D3 in Žilina, Strážov-Žilina and Brodno are prepared, but the department has not secured enough money for them.

According to Vážny, over the past year the project preparations have stagnated, commenting that since the day the government changed the projects have barely moved forward.

“If we are talking about the assumed hand-over of highways [for use], the realistic plan of Figeľ is to hand over, by 2014, 5.2 kilometres of the D1 highway in half-profile,” Vážny said, referring to a half-way stage of construction in which one carriageway is opened as a regular road first while construction of the other carriageway continues. He argued that Figeľ’s figure of 130 kilometres of highways to be completed is incorrect because it includes 52 kilometres of the R1 dual carriageway that he said is the result of a successful PPP project by his government.

As for the reasons why his government failed to finish the highway connection between Bratislava and Košice, Vážny referred to what he called stagnation in highway construction from 1998 until 2006, when the Fico government took office. Due to the lack of traditional resources for financing and the exhausted credit capacity of the National Highway Company, the government wanted to use, along with traditional means, PPP projects to progress construction of the highways by 2010 and, without tunnels, even commence operation of large parts of the three routes which were intended to be funded via PPP packages.

The Radičová cabinet completely ended the last remaining PPP project for highway construction last December. Minister Figeľ reportedly responded to pressure from other coalition partners who saw this method of financing, building and operating highways as too expensive and he cancelled what was known as the third PPP project, which was prepared to build and operate unfinished sections of the D1 cross-country highway.

Žilinská Diaľnica, a consortium led by the German company Hochtief, was the concessionaire chosen under the third PPP package to design, build and operate about 30 km of the D1 highway between Hričovské Podhradie and Dubná Skala near the city of Žilina. Of the three PPP agreements, the third package was considered to be the most technically demanding as it included a tunnel almost 7.5 kilometres long between Višňové and Dubná Skala.

Earlier last year, in September, Figeľ had terminated the so-called first PPP package, which was to construct five stretches of the D1 highway covering 75 kilometres between Martin and Prešov. Even though a consortium had been selected via tender to execute the project, the PPP was terminated after Figeľ decided not to extend the deadline for the project to close its financing arrangements.
The minister’s decision prompted objections from the leaders of the previous government who had advocated PPPs as the best method for advancing Slovakia’s highway construction goals as well as from the consortium of firms that had won the concession.

The first PPP package had been in preparation since early 2009 and the actual construction work was to have been completed by a consortium involving Doprastav and Váhostav-SK, two major Slovak construction firms.

Fico’s government had launched all three of the PPP packages but when it left office only the second PPP package was in its final phase, an agreement had been signed with the consortium – in this case Granvia – and construction had started. Granvia is building 52 kilometres of the R1 dual carriageway between Nitra and Banská Bystrica under this PPP. Its dual carriageway stretches should be gradually put into operation during 2011 and 2012.

Since the cancelled PPP projects were in a nearly completed stage, several stretches were ready for actual construction to begin and the National Highway Company (NDS) announced new tenders for the work. However, the process is not going as smoothly as originally expected.

The NDS announced tenders in November 2010 to build two stretches of the D1 highway near Levoča between Jánovce and Jablonov. Originally this part of the highway, 18.5 kilometres, should have been built within the first PPP package. However, the NDS cancelled the tender to build the second, more expensive, stretch in early May, saying that objections raised by Doprastav construction company were the reason. The NDS was concerned that if a court began to consider this company’s objections, the tender process could be delayed for many months or halted completely. Several other companies participating in the tender also complained about the terms on how the highway should be built, but only Doprastav took legal action.

Apart from tenders to build D1 stretches near Levoča, the NDS under the Radičová government has launched a tender to construct an 11-kilometre D1 highway stretch from Fričovce to Svinia, close to Prešov, and a tender to construct the 16.5-kilometre D1 highway stretch from Dubná Skala to Turany close to Martin. The deadline for submitting bids for the Fričovce-Svinia stretch is June 27.
Bidders on the Dubná Skala-Turany stretch must submit their bids by August 2.

On June 2 the NDS confirmed selection of Váhostav-SK and Bögl a Krýsl, who had submitted the lowest bid, to construct a 9-kilometre stretch of the D1 highway between Jánovce and Jablonov, near Levoča. Their bid of €59.94 million was 37 percent below the estimated cost of €94.65 million.