Increasing energy bills as well as greater environmental awareness are making the general public and businesses alike think more about effective energy solutions that can be applied to buildings. But even though Slovakia is obliged to improve its energy efficiency in order to meet EU directives, interest in ‘green houses’ has been growing slowly so far. 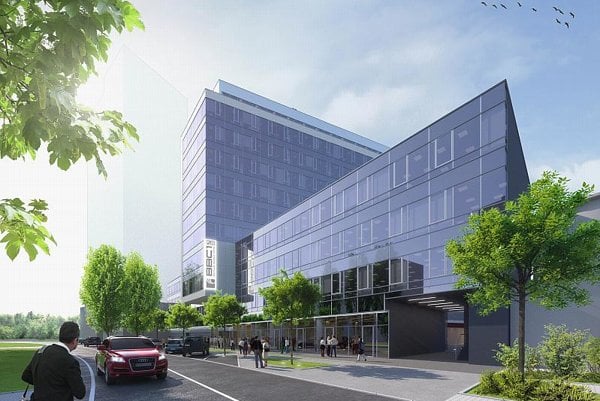 Increasing energy bills as well as greater environmental awareness are making the general public and businesses alike think more about effective energy solutions that can be applied to buildings. But even though Slovakia is obliged to improve its energy efficiency in order to meet EU directives, interest in ‘green houses’ has been growing slowly so far.

“Nowadays buildings are responsible for almost 40 percent of energy consumption, which is more than transport or industry alone,” Vladimíra Bukerová, executive director of the Slovak Green Building Council (SKGBC), told The Slovak Spectator, adding that the level of understanding about green buildings in Slovakia is far from comprehensive. “When it comes to green buildings, most people imagine one of two things: either a typical building of western standards with good insulation and above-standard energy efficiency, and with a solar panel or two thrown in for good measure; or a small house – an ecosystem on its own – with a green roof, maybe insulated with some natural material such as straw or mud. Both and neither are entirely true.”

But SKGBC regards the concept of green buildings and sustainable construction in a modern society in a more comprehensive way, one in which designing a new or refurbished green building is a process in which everything is interconnected and each part influences the others.

“That is why we look at the whole life cycle of the building – from the construction phase, through management, to eventual transformation or demolition,” said Bukerová. “So we are talking about the materials used – how natural and safe they are, how much energy was used to produce them, whether they are available locally and thus support the local economy; we need to look at the design and the way a building fits in; the general energy efficiency of the building, using renewable sources when it is possible, efficient and economically viable ... And of course, one has to take into account the economic aspects – value for money, future savings on energy, resources and in terms of human productivity, if and how the building can be transformed at the end of its natural life cycle, and so on. In short, the green buildings we are talking about are healthy, resource- and energy-efficient complexes which have the greatest possible synergy with their communities, cities and environment.”

According to real estate agents, all buyers of residential housing in Slovakia consider monthly costs related to living in a property, including energy bills. But Slovaks are conservative and the idea of green and more environmentally-friendly architecture is only slowly becoming the norm.

“Some ponder the aspect of energy efficiency, but most still do not comprehend the large amount of advertised technical information,” Daniela Danihel Rážová, the director of real estate agency Bond Reality and head of the Association of Real Estate Brokers, told The Slovak Spectator. “Clients actually fully understand the problem of energy efficiency only when they have to settle the first rental payment or get the first calculation of costs accompanying their invoices.”

With regards to low-energy family houses, which are often built using prefabricated sections, many clients do not trust the quality of rapidly-constructed property, she said.

“Slovaks are conservative and they believe more in bricks than in [prefabricated] houses,” said Danihel Rážová.

Bukerová concedes that the Slovak public is not very interested in ‘green’ buildings at present, but she remains positive.

“Even though Slovakia is currently a little bit behind its neighbours, the good news is that we live in a very tightly-connected region where markets are closely linked and information travels fast,” said Bukerová. “That means the smart solutions are finding their way here on their own.”

Clients are also distracted by the fear that the costs of building a green house are higher than those for a ‘traditional’ one. But experts point out that even though construction of a passive or low-energy building may be slightly more expensive, the higher costs will be recovered in the form of lower bills for heating, not to mention the enhanced comfort of living.

“This was our own decision, but in the end it has spurred interest,” Kierulf told The Slovak Spectator, adding that by declaring that what they do is the passive standard, trust has grown and along with it so has interest from clients.

For now, five passive-energy houses designed by Createrra have been built and people are already living in them. Another eight are under construction and almost 30 will be built next year. Ten show houses have also been constructed.

But Kierulf does not limit the passive-energy standard to residential real estate, pointing out that it is easier and cheaper to make a large building airtight – a precondition for achieving the passive standard – than it is a small one like a family house. Moreover, he emphasises that the passive standard is not just about effective usage of energy. Instead, he says, the whole concept brings a high comfort of living with controlled ventilation, recuperation of heat, microclimate and other factors, and is thus suitable for large buildings such as offices, apartment buildings, schools and others. He adds that Germany has had very good experience in these terms.

Apart from the residential segment, there are also some early adopters in the office segment, too. For example, Austria's CA Immo is constructing the new BBC1 Plus office complex in Bratislava as a sustainable building and EcoPoint in Košice will be of a similar character.

According to Bukerová, the crucial point is to have enough information, which includes numbers everyone can understand, e.g. money saved on energy, water or waste management. She agrees with Kierulf that positive working examples of such buildings serve as an inspiration to others.

“That is the best marketing for any kind of product – if you have enough of them around and see people using them, then demand will grow,” said Bukerová. “Right now, interest among large developers or in the public sector in Slovakia is somewhat cautious, because there is not enough information and there is almost no public pressure.”

Creating such demand is the ambition of organisations like SKGBC, which was launched in March 2011 with the goal of making green buildings seem as normal as energy-efficient light bulbs and raising general awareness, promoting green concepts in the construction sector and showcasing available products, systems and solutions, so that everyone can have a choice.

To reduce energy consumption and to increase the use of energy from renewable sources in the building sector the European Council has adopted a directive on the energy performance of buildings, the latest amendment being 2010/31 ES.

“This directive talks about two crucial dates; the end of 2018, as the date from which all new public buildings should be of a ‘nearly-zero energy standard’; and the end of 2020, when this should apply to all new buildings,” said Bukerová, adding that in general, however, there is a feeling in most EU countries that the level of preparation for meeting EPBD (the Energy Performance of Buildings Directive) criteria is insufficient.

“There is concern that countries should already be taking some partial steps in order to meet these criteria, and that not enough is being done,” said Bukerová. “Most observers think that at least some countries are assuming there will be exceptions or delays.”

And now, according to Bukerová, the European Commission seems to be watering down its own Energy Efficiency Plan, which was published in March. It proposed requiring that public authorities improve the energy efficiency of at least 3 percent of their buildings each year and said that ‘each refurbishment should bring the building up to the level of the best 10 percent of the national building stock’. However, the latest draft appears to have backed down from this aspiration, suggesting renovations should be done to minimum energy performance requirements, according to Bukerová.

While pointing to the EU directive and its approaching deadlines, Kierulf does not see the relatively low engagement of governments in terms of meeting the EU directive as being a problem.
“Our path is simple,” said Kierulf. “We show that it is worth it for everybody to go in this direction, that it will not cost more, that they will have better housing and that the costs will be paid back. A lot of people have already realised this.”