THE FORMER mayor of Bratislava and a current member of parliament, Andrej Ďurkovský, has become the second sitting MP whose immunity from criminal prosecution could be removed by parliament. While the General Prosecutor’s Office said it could be a lengthy process before it decides on its recommendation concerning Ďurkovský’s immunity, some MPs from parties of the governing coalition have already said they would vote to remove the former mayor’s immunity. 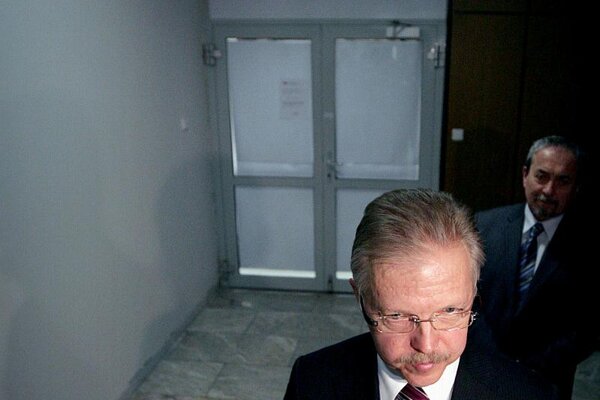 THE FORMER mayor of Bratislava and a current member of parliament, Andrej Ďurkovský, has become the second sitting MP whose immunity from criminal prosecution could be removed by parliament. While the General Prosecutor’s Office said it could be a lengthy process before it decides on its recommendation concerning Ďurkovský’s immunity, some MPs from parties of the governing coalition have already said they would vote to remove the former mayor’s immunity.

The Bratislava Regional Prosecutor’s Office has been investigating allegations that Ďurkovský had illegally given consent to the Henbury Development company to demolish the buildings of Bratislava’s Culture and Leisure Park (PKO) that are owned by the city.

In 2005 the Bratislava municipal council approved the sale of the land lying under the PKO buildings, situated on prime real estate on the north bank of the Danube River to the west of centre city. It is alleged that Ďurkovský later gave permission to demolition of the buildings without approval of the municipal council.

The buildings have not been demolished but the whole matter has been under investigation by Slovakia’s Office of the Fight against Corruption.

The controversy surrounding the PKO became an issue already last year after Ďurkovský took his seat in parliament as a KDH candidate. At that time he expressed his opinion in favour of limiting immunity for MPs for criminal offenses, a change that Prime Minister Iveta Radičová has attempted to move through parliament without success.

“My opinion hasn’t changed,” Ďurkovský said, as quoted by the Sme daily, after the news about the motion to strip him of immunity surfaced, maintaining that he broke no laws and the actions he took as mayor were correct.

A leader of the Christian Democratic Movement, Ďurkovský’s former party, has stated his party would have no problem in voting to strip the independent MP of his immunity.

“When there was a request from the General Prosecutor’s Office to strip an MP of immunity, KDH deputies have always voted in favour of it,” Pavol Abrhan, KDH’s deputy chairman, told the TASR newswire. “I presume they will do the same now.”

Another party in the governing coalition has also stated it is inclined to support a motion to strip Ďurkovský of his immunity if it comes before parliament. Representatives of Most-Híd party said they would vote in favour of it while representatives of the Freedom and Solidarity (SaS) party and the Slovak Democratic and Christian Union (SDKÚ) said they would wait to learn more details before making a decision about such a motion.

Out of the KDH caucus

The allegations against Ďurkovský in his handling of the PKO building as well as another controversy during his mayoral term already have had consequence to his political career. In January 2011 he resigned from the Christian Democratic Movement after a six-hour meeting with the party’s presidency that was convened for him to explain his actions in two particular controversies. The first was about an alleged hidden privatisation and questionable financial transactions involving Bratislava’s water utility, BVS, and the second concerned his alleged overstepping of authority by signing an agreement for demolition of the PKO.

At that time Ďurkovský denied any improprieties and stated that information that appeared in the media was false but said he was leaving KDH so that he would not harm it, vowing to clear his name and then re-join the party.

Ďurkovský is not the only sitting MP who might see a vote in parliament to strip him of his immunity. The police have been seeking to bring criminal charges against MP Igor Štefanov of the Slovak National Party (SNS), a former construction minister in Robert Fico’s government, in connection with the so-called bulletin-board tender.

The General Prosecutor’s Office, however, did not forward a recommendation to parliament to strip Štefanov of immunity and instead returned the case to the police for further investigation.