SLOVAKIA just celebrated 20 years since the departure of the Soviet army from what was then the Czechoslovak Republic after the country was occupied following the events of Prague Spring in 1968. The Soviet military left more than just wounds to the national psyche as the cleanup of soil and water contaminated by the occupying army has cost Slovakia over €40 million since 1993, the Sme daily reported. 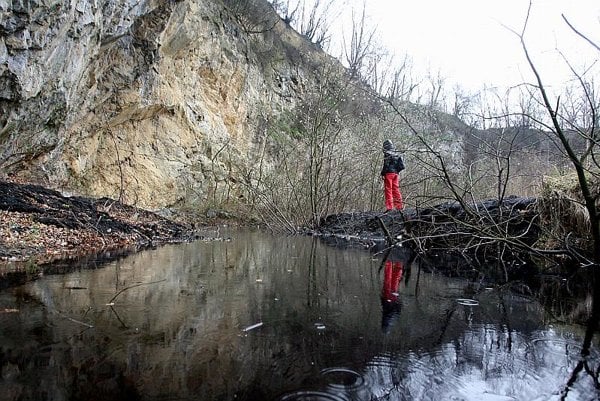 A dump of waste oil products near Bratislava as it looked in 2007. (Source: SME)
Font size:A-|A+0

SLOVAKIA just celebrated 20 years since the departure of the Soviet army from what was then the Czechoslovak Republic after the country was occupied following the events of Prague Spring in 1968. The Soviet military left more than just wounds to the national psyche as the cleanup of soil and water contaminated by the occupying army has cost Slovakia over €40 million since 1993, the Sme daily reported.

This is only part of the poor environmental heritage that Slovakia must overcome because policies and programmes to protect the environment and remediate past damage only came into society’s spotlight after the communist regime fell in 1989.

As in other countries, permanently sustainable development is now identified as one of the determinant principles for future growth in Slovak society and its economy. It means satisfying the needs of the current generation without endangering the opportunities of future generations to satisfy their needs, according to the 2010-2015 State Programme for Remediation of Environmental Burdens adopted by the Slovak government last March.

Sustainable development and protection of the environment were, however, alien concepts in the past.

Industrial production in Slovakia was accompanied by heaps of waste and multiple kinds of uncontrolled pollution. Localities contaminated with hazardous wastes or materials or barren landscapes from various kinds of pollution are now labelled as sites with environmental burdens: areas which present a serious risk to human health or to the environment in regard to current or future use of the site, the programme document states.

Environmental burdens received insufficient attention in the past and this is why Slovakia’s policy of targeting and remediating environmental burdens is in its early phases. The communist regime paid no attention to the problem and finding ways to resolve these burdens had low priority during Slovakia’s privatisation phase and more recently these issues were brushed aside so that companies would not face higher costs during the economic crisis.

Now, the government of Iveta Radičová states that it is determined to make headway on the problem. It adopted the State Programme for Remediation of Environmental Burdens last year and the Ministry of Environment is now working on a specific law to deal with remediation of environmental burdens. A primary objective of this new legislation is to establish a mechanism for identifying responsibility for existing environmental burdens and determining who should be responsible for remediation of the hazards. Preparation on various aspects of this legislation started as early as 2003.

“The new law will determine responsibility, also in respect to changes in ownership of property,” Greifová told The Slovak Spectator. “If the responsible person is not identified, the state, represented by a respective ministry whose scope of operation is linked with the origin of the environmental burden, will provide the performance of duties as the responsible person. The law further removes the possibility of speculative transfers, also retrospectively, and also gives powers to resolve environmental burdens without the approval of an irresponsible owner of the property.”

The cost for remediation of existing environmental burdens is estimated at €487 million between 2010 and 2027. Environment Minister József Nagy estimates that 84 percent of that amount would be covered from the state budget and EU funds and the remainder would come from identified responsible persons, the aktualne.sk news portal reported.

The number of localities across Slovakia with possible environmental burdens is estimated at about 30,000.

Greifová said a registry of identified sites with environmental burdens, which is part of a publicly-accessible information system about environmental hazards available at www.enviroportal.sk, lists 1,845 locations in Slovakia. She added that the process of identifying the responsible person can start only after the proposed law is adopted. These environmental burdens include the ‘heritage’ left by the Soviet armies in the form of contamination of soil by crude oil products as well as the negative impacts of mining, industrial production, waste dumping and many other negative impacts.

Juraj Rizman, director of Greenpeace Slovensko, told The Slovak Spectator that deciding which of the existing environmental burdens are the most dangerous and have the most urgent need for remediation is a difficult and complex task. He added that sites with an environmental burden can also include old waste dumps, neglected storehouses of agricultural chemicals, old mining facilities, dangerous tailings piles from mining by-products and industrial settling basins.

“Basically we consider those environmental burdens which represent an immediate risk to human health or contamination of soil and water as the most dangerous ones,” Rizman said. “These number more than 1,500 sites; one of which is, for example, the region contaminated with PCBs, polychlorinated biphenyls, around Strážske in eastern Slovakia.”

Rizman told The Slovak Spectator that the industrial sector in Slovakia is not unified in its approach to remediating existing environmental burdens.

“Greenpeace Slovensko is pursuing the principle that is respected in Europe which is partly in our legislation as well – the principle that ‘the polluter pays’,” Rizman said. “Thanks to this [future] law some industrial companies – the polluters – can be identified and confronted with the requirement to financially cover remediation of the burden. Logically, many [companies] do not like this.”

But Rizman also said that his organisation has also seen companies in Slovakia, both industrial and chemical firms, which have started to remediate environmental burdens without any legislation in place, noting that these companies have voluntarily undertaken various measures to decontaminate localities or at least prevent a hazardous condition from getting worse.

Rizman believes that the biggest headway in remediating environmental burdens has been in eliminating the hazards left by the Soviet Army.

Among activities by industrial companies to eliminate environmental burden, he cited the example of ZSNP Žiar nad Hronom, an aluminium producer, to remediate its hazardous settling basin. According to Rizman, this is one of a few examples when remediation activities go beyond generally accepted practices.

Greenpeace Slovakia believes the current language of the draft bill could be made somewhat tougher and less tolerant of polluters but understands that this may not be possible in the current situation.

“We are realists; we know the situation of Slovak industry and we know that when drafting legislation it is necessary to search for an acceptable compromise,” Rizman said, adding that Greenpeace had initiated the discussion and drafting of this bill and participated in its preparation. “It seems that the wording of the law proposed by the Ministry of Environment might be a mutually acceptable compromise.”

“The fundamental problem is adoption of a law which would open space for effective actions by producers and owners of these environmental burdens but simultaneously would not be retroactive,” Roman Karlubík, president of ZCHFP told The Slovak Spectator, adding that such an approach would mean that owners could not challenge the law before the Constitutional Court. He stated that neighbouring countries had dealt with this question by either having the state take over financial responsibility for existing environmental burdens or providing a long time frame for companies to undertake remediation, 50 years and more, or a combination of these two solutions. “But our association was told that the current condition of state finances does not allow such a solution.”

Karlubík said ZCHFP cooperated intensively with the Ministry of Environment in developing the text of the proposed bill and hopes that it will be adopted in a form which would open such opportunities.

“One should realise that Slovakia’s GDP is created more than 80 percent by exports and that it would be the biggest exporters who could be potentially affected,” Karlubík stated, adding that this could then impact the whole population of Slovakia. “Under the leadership of ZCHFP, representatives of employers’ organisations participated in raising objections and provided remarks and along with the Ministry of Environment we have adjusted a number of technical issues in the bill’s wording. But two fundamental issues, the threat of retroactivity and financing, are still not completely resolved. However, we have a promise from the Ministry of Environment and the government that the issue of financing would be resolved together and in the interest of all involved.”