Made in Slovakia can be a four-segment puzzle

The most recent – and last in the 2010-2011 season – premiere of the Slovak National Theatre on June 25 and 26 is a dance piece and it is called Made in Slovakia. It stands out among the pieces offered by the SND in that it combines four different parts by several authors, presenting various musical- and dance styles. The element that unites them all is Slovakia as the place where choreographies’ authors either come from, work, or both. 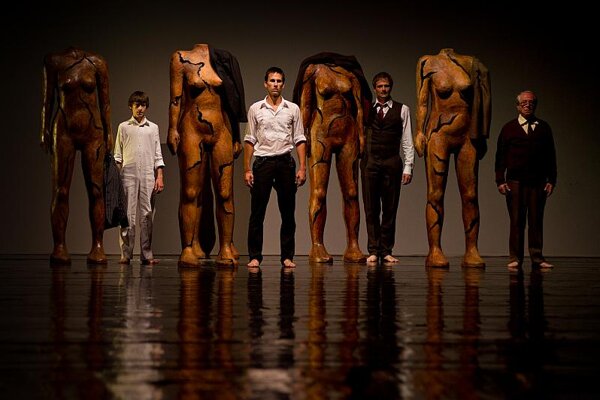 The most recent – and last in the 2010-2011 season – premiere of the Slovak National Theatre on June 25 and 26 is a dance piece and it is called Made in Slovakia. It stands out among the pieces offered by the SND in that it combines four different parts by several authors, presenting various musical- and dance styles. The element that unites them all is Slovakia as the place where choreographies’ authors either come from, work, or both.

The recently installed head of the ballet section at the theatre, Andrei Sukhanov, said at a press conference on June 22 he was glad to have this work completed (as he “inherited” form his predecessor), and also that he was glad to have this rather modern piece as his first premiere. He further added that what complicated the situation was the fact that former head of SND ballet section, Mário Radačovský, decided to create a new ballet ensemble called Bratislava Ballet and after organising a competition, he lured nine dancers from SND to work with him. Sukhanov explained that except for one part, those particular dancers will later be replaced in order to avoid time pressures and simultaneous performances in both ballet ensembles. He added that it is quite normal elsewhere in the world to try innovative perceptions in new theaters and also to follow the choreographer one knows well, even when it means changing one’s employer. He also said that the National theatre would gladly host the performances of Baler Bratislava on its stages. He wished the leaving dancers all the luck for their careers; saying that more competition, as well as, dance troupes can equal better and wider choice for audiences.

The first part of the Made in Slovakia evening, The Birthday, was choreographed by Yaroslav Ivanenko, a Ukrainian artist working in Slovakia. It was inspired by the work of Russian writer P. I. Tchekhov to the music of Franz Schubert which, as Ivanenko said, surprised him with how well it corresponded with the “Russian spirit”. This part was neo-classical, including an air of the bohemian and decadent style of the early 20th century. The second piece – 4Men by Šárka Ondrišová - is a very intimate and low-profile psychological study, showing men, or one man, in the course of time, and also the father-son relation in a modern expression, to the music composed specifically for this occasion by Peter Groll who in some places tailored the music specifically for performers and their perception. Peter Dedinský of the original SND cast was contracted to dance here ad hoc, and an interesting fact is that two of the “men” are played by real-life father and son, Jozef Dolinský Sr. and Jr. This part brought the less classical scenic dance onstage. Ondrišová said she was – as a woman probing the “man’s world”- inspired by Robert Bly’s Iron John, a study of the male essence, role and plague in the modern world.

The third section, Call up! By Ján Ševčík (who currently works in the Netherlands) is clearly inspired by folklore, traditional roots, and the choreographer’s past (he worked for the folklore ensemble Lúčnica). It demonstrates a short but dramatic story of a recruit who leaves his beloved girlfriend to join the army. He dies but at the same time, his child is born, and so the spiral of life goes on and on. Call Up! was made to the reproduced music of rock- and pop bands inspired by folklore, Jej družina, Čechomor and Ghymes. The last choreography, Angels over the City, is only loosely inspired by Wim Wenders’ movie Wings of Desire: Sky over Berlin (Himmel ueber Berlin) in which an angel watching and guarding people falls in love with a human; and subsequently wishes to exchange immortality for human feelings and emotions. Choreographer Igor Holováč (and co-author Nikita Slovák) said he had combined the music by W. A. Mozart with the most modern music by Slovak rapper and composer Milan Janáči “Opak”, where the central idea (that life is always, under all conditions worth living) is expressed through lyrics sung by singer Misha. Angels over the City are, rather than philosophical and depressing, more to good-humoured side, also thanks to the characters of two tempting Devils, Him and Her.

After the two premieres at the end of June, Made in Slovakia will be reprised in the next, 92th, season. The ballet of the SND has opened, with the State Theatre’s Ballet Ensemble from Košice, the Cultural Summer in the Slovak capital on the Main Square on June 22, and on June 23; it performed Tchaikovski’s Swan Lake in the Hungarian town of Gyor. During July and August, the Slovak National Theatre has vacations, and the new season opens by mid September.