MOST people barely think about how the many everyday things around us, from nuts, bolts and paper clips to computers and space ships, were produced or fabricated or where. The Piedmont – Industry photo exhibition, subtitled Photographs of a Century of Work, offered at Bratislava’s Design Factory until July 10 reveals much about this fascinating world of industry in this region of Italy. The exhibition is held within the Dolce Vitaj festival of Italian culture and Bratislava is its second stop after Košice. 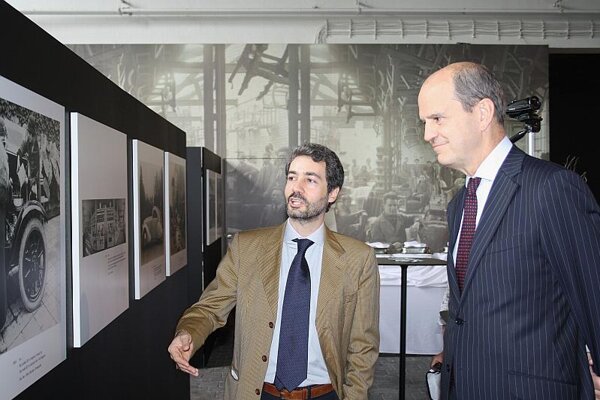 MOST people barely think about how the many everyday things around us, from nuts, bolts and paper clips to computers and space ships, were produced or fabricated or where. The Piedmont – Industry photo exhibition, subtitled Photographs of a Century of Work, offered at Bratislava’s Design Factory until July 10 reveals much about this fascinating world of industry in this region of Italy. The exhibition is held within the Dolce Vitaj festival of Italian culture and Bratislava is its second stop after Košice.

The exhibition was prepared by Italian photographer Niccolo Biddau, who not only took some of the featured photographs, but is also its curator and the initiator of the project. The concept dates back to 2002 when Biddau – after a successful career as a photographer of nudes and fashion – became fascinated with the aesthetics of machinery.

“Back in 2002 I had an idea to tell the story of the Piedmont region through photography as the camera is a universal means of expression,” Biddau told The Slovak Spectator, adding that actually many people living in this region were not aware of the extent of industrial facilities in the region, except perhaps for the well-known Fiat and Martini & Rossi factories.

The exhibition, organised chronologically, can be viewed in two ways – as a historical exposition of the development of the region’s industry and also as a presentation concerned with the development of industrial photography itself. Biddau searched the archives of companies that had been operating in the region for a long time and are still active today. He then selected a collection of photos ranging chronologically from the end of the 19th century up to photos he took in 2002 and 2005. His aim was to reconstruct the entire complex, highly-articulated arc of Piedmont’s industrial life.

“The archives of the companies in this story possess a wide range of photographs, both in terms of their quality and quantity,” Biddau wrote in the exhibition catalogue. “At first sight, the complexity of such rich archive materials was daunting. My task as curator was to combine and weave the individual stories into historic events highlighting conditions and production methods that changed over the years as a result of technological innovations.”

As a result, the exhibition offers a captivating historic-photographic journey in which each image tells a story of its own.

The exhibition opens with ‘family photos’ of the owners of the factories as well as of workers. The photos show how the labour force at these factories increased in numbers and that, as Biddau explained, group photos of workers in front of the factory actually inspired the well-known painting The Fourth Estate by Giuseppe Pellizza da Volpedo. In later photos the growing working class can be seen as well as the first signs of socialist movements and trade unions and the changing roles of men and women in factories. All the early industrial images are staged, as industrial photographic reportage only started in the 1970s with the development of more sophisticated cameras and photographic processes. And while industrial photography began essentially as documentary record, photographers soon started to explore the aesthetics of machines and the industrial processes.

The photos record the recovery of Piedmont industry following World War II, including a touch of industrial politics as well as the arts with photos, for instance, of a young Sofia Loren visiting the Mirafiori plant in 1955. It is also fascinating to see the deep involvement of factory owners in the production process, for example of Giovanni Cerutti, the founder of a mechanical workshop, personally inspecting a gravure rotary press for printing periodicals from the 1960s. Nor is the role of merchandising omitted and the exhibition includes one of the first promotional photos by Fiat. Later photos show how workers began to disappear from the manual production scene to become controllers and supervisors.

The last part of the exhibition presents photos by Biddau displaying the actual beauty of industry.

“The focus of industrial photography shifted to the machines, capturing their aesthetic characteristics and revealing such a surprising degree of beauty that we begin to understand that industry can also be beautiful and rich in aesthetic values,” Biddau wrote.

While his idea of developing the industrial photography project of the Piedmont region is now 10 years old, the industrial theme remains appealing for Biddau. Currently he is focusing on items of everyday use.

“We can’t imagine all the work which is behind such an each item or object,” said Biddau, adding that his aim is to depict all the work though his photography, including the efforts of designers as well as the manufacturers and industrial processes that produce each item that reaches our hands.