Bridging cultures at a French creperie

SLOVAKIA can be seen as a safe country with much better living conditions for those fleeing from economically-unstable nations or regions stricken with war. But even citizens of economically-developed nations can find that Slovakia has huge potential for those who want to invest, establish new enterprises and start new lives. That was the challenge that attracted Frédéric Miskiewicz to settle in Slovakia. 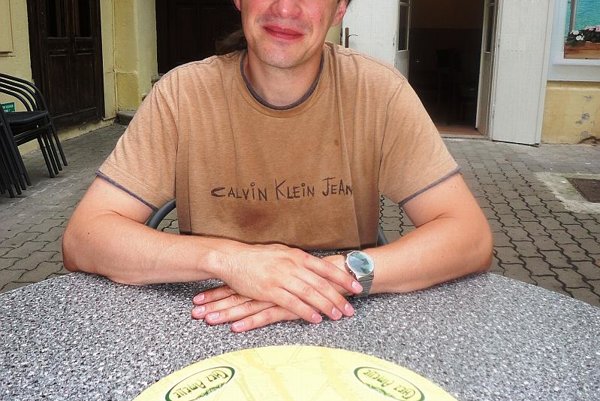 SLOVAKIA can be seen as a safe country with much better living conditions for those fleeing from economically-unstable nations or regions stricken with war. But even citizens of economically-developed nations can find that Slovakia has huge potential for those who want to invest, establish new enterprises and start new lives. That was the challenge that attracted Frédéric Miskiewicz to settle in Slovakia.

Born in Savigny-sur-Orge, in the vicinity of Paris, to a second-generation Polish immigrant father and a Slovak mother, his summer holidays were divided between Poland and Slovakia. His childhood desire to stay in Slovakia for a year to improve his Slovak, live with Slovaks and earn a living by teaching French was fulfilled during the last year of his bachelor’s studies. In September 1995, Miskiewicz arrived in Slovakia with his French passport in hand.

A typical migrant to Slovakia

Miskiewicz perfectly matches the definition of a typical migrant to Slovakia: a male coming from one of the EU countries, 25-34 years old, with relatively high education. These are the most common characteristics noted in a recent research study prepared by the International Organization for Migration (IOM) in Slovakia entitled ‘Public Attitudes towards Foreigners and External Migration to the Slovak Republic’.

Slovakia is considered to have a low number of incoming migrants by the standards of EU countries. According to Slovakia’s Statistics Office there were 62,882 foreigners holding a residence permit living in Slovakia in 2009, which is just over 1 percent of the total population. In addition, two out of three foreigners living in Slovakia are citizens of EU countries, mostly Czechs, Romanians and Poles.

Half of Slovakia’s public believes that foreigners steal jobs from Slovak citizens, according to the IOM research that was based on a survey of a representative sample of Slovaks. However, according to the most recent statistics provided by the Labour, Social Affairs and Family Central Office (ÚPSVAR), the number of migrants legally working in Slovakia was only 19,915 as of April 2011, a negligible percentage of the total labour force.

Starting in a new country

Bureaucracy and language barriers are two of the biggest obstacles facing migrants when they enter the Slovak labour market according to a research project called Economic Aspects of Migration and Integration of Migrants from Third Countries in Slovakia published by the Institute for Public Affairs (IVO). But Miskiewicz does not recall any negative experiences when establishing his business.

“Whether you are in France or in Slovakia, you will always come across some elements of bureaucracy,” Miskiewicz said. It took him around seven or eight days to legally establish his business but added that it would have taken considerably longer in France.

“A positive approach and a smile always seem to have worked for me,” Miskiewicz said.

A similarly positive experience occurred when he registered his place of residence at the Bratislava office of Slovakia’s Foreigners and Border Police upon his arrival. EU citizens who intend to reside in Slovakia for more than three months are obliged to notify that police department of their place of residence within 10 days of their entry in Slovakia, the IOM noted.

Those who are employed, run a business, study at a university, have sufficient financial means and health insurance, or who will potentially find employment, or are related to EU or EEA citizen can apply for a permanent residence permit which is valid for five years.


Miskiewicz said the whole process was simplified for him because his mother is a Slovak citizen and within three weeks he received his first Slovak ID card.

Fred, as most of his friends call him, has been living in Slovakia for almost 16 years. His Slovak language skills have been enhanced almost to the level of a native speaker. He taught French at the French Centre, served as a translator and interpreter for almost 10 years, worked for public-service broadcaster Slovak Radio in the French newsroom and for a French telecoms company as a technical sales representative. In addition he managed to establish his own French crepe restaurant and, along with a French business partner, he runs a music venue named Hlava 22.

Most people introduce him to their friends as ‘the Frenchman’ and he jokingly calls himself a Bratislavan petty bourgeois with Slavic blood and French upbringing.

The idea of opening a creperie was triggered as early as his translating days but it took him nearly five years to find suitable premises in the centre of Bratislava.

“The restaurant is my baby,” he said. “I have created recipes, chosen appropriate furniture, decorated the place, trained staff, and so forth.” In other words, Miskiewicz is all in one: a marketing manager, a cook, a handyman, an accountant, a waiter and an owner.

“One of the requirements to become a waitress at Chez Amélie is speaking French,” said Michaela Šindlerová, who has been working at the restaurant for nine months. She added that Miskiewicz often communicates with the staff in French so their French vocabulary keeps expanding and this is helpful since their regular customers are not only Slovaks but also many foreigners, including French citizens living in Slovakia.

Miskiewicz currently employs around 20 people and his team is exclusively Slovak at the moment but he said he would welcome any foreigners who can speak Slovak, as he makes no differences between people born here or outside of Slovakia.

“As long as a person is not afraid to work and can speak both good Slovak and French, I would always consider such a candidate,” he said. As an employee and later an entrepreneur he has been paying his income tax to Slovakia for 15 years now and contributing to the Slovak economy, Miskiewicz said, dismissing the concerns voiced by over 41 percent of respondents to the IOM survey about the state budget being under great pressure because of welfare benefits paid to foreigners.

Miskiewicz said his initial decision to live among locals rather than remaining as a tourist or only associating with other French nationals in Slovakia turned out to be crucial in his integration process. Despite his Polish-Slovak parents, he came from a home where French was exclusively spoken and therefore he was aware that without a decent knowledge of Slovak he would find living and working in Slovakia rather difficult.

“The lack of the Slovak language can be seen as a serious obstacle and can prevent foreigners from reaching successful integration,” said Zuzana Vatráľová, the head of the IOM Office in Slovakia.

But Miskiewicz admitted that after a few years of mostly speaking Slovak and living in Slovakia, nostalgia for the French language and his homeland traditions hit him. As a result, five years ago he founded an association, Žabužníkov, with his French friends.

The members of the association meet regularly and organise and attend cultural, sport and gastronomic activities. Their Fools Ball is a popular annual costume event open not only to a broader Francophone public but to anyone who likes to party in a French style. In similar vein, both of Miskiewicz’s businesses offer diversity not only in food and music but also a place where diverse cultures can interact with curious locals.

“He speaks fluent Slovak, respects our culture and employs Slovak people,” said Pamela Repková, a regular at the restaurant, who has known Miskiewicz for more than six years.

According to Dária Sládečková, another regular patron, not only does Miskiewicz provide a platform where different food, culture, music and traditions can easily coexist at his restaurant and music club, but he is also living proof of how foreigners can integrate into Slovakia, contribute to the domestic economy, enrich Slovakia’s social and cultural experience, and also be personally successful.

The author is an intern at the IOM, the International Organization for Migration, at its office in Slovakia.