Disunity in coalition over help for Greece

DECISIONS involving financial assistance to Greece have become one of the thorniest political issues of the Slovak summer, with one of the four ruling coalition parties advocating bankruptcy as the only viable option for debt-ridden Greece, which now says it needs more cash from eurozone countries. 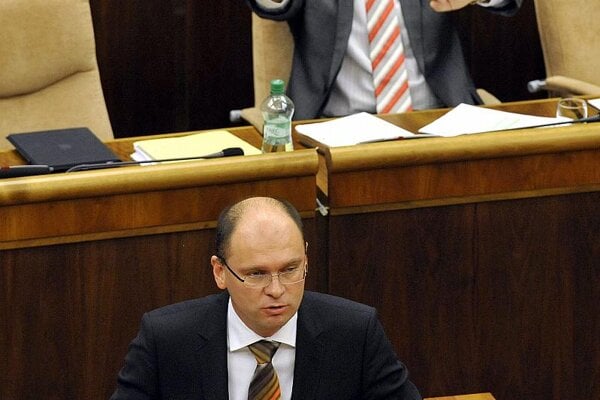 DECISIONS involving financial assistance to Greece have become one of the thorniest political issues of the Slovak summer, with one of the four ruling coalition parties advocating bankruptcy as the only viable option for debt-ridden Greece, which now says it needs more cash from eurozone countries.

Slovak Finance Minister Ivan Mikloš reacted by stating that a default by the Greek government, whether controlled or uncontrolled, would not spare Slovakia’s economy from certain negative impacts.

The Freedom and Solidarity (SaS) party, though a member of the ruling coalition, attempted to limit the finance minister’s powers in negotiating the conditions for a second loan to Greece by advancing a resolution in parliament – but on July 6 MPs defeated the proposal and left the minister’s hands untied.

Of the 148 MPs present for the vote, 35 backed the proposal, one voted against, 51 abstained and 61 did not vote. Though the opposition Smer party did not support SaS’s proposal to limit Mikloš’s authority, it nevertheless accused the government of damaging Slovakia’s standing within Europe.

Finance ministers from eurozone countries are expected to reach a consensus in the coming weeks on the size of a second loan for Greece, and to decide more clearly on the degree of participation by private holders of Greek debt in resolving the country's public finance crisis.

On June 21 the Slovak cabinet approved an increase in the amount of Slovakia’s guarantees to the European Financial Stabilisation Facility (EFSF) and to its 2013 successor, the European Stability Mechanism (ESM). All ministers from SaS, along with one from the Christian Democratic Movement (KDH), voted against the higher guarantees. Prime Minister Iveta Radičová said at that time that she would inform Brussels very precisely that the higher guarantees were approved by the government but she could not assure that the proposal would be approved by parliament.

Political analyst Miroslav Kusý told The Slovak Spectator that the approach of SaS towards the Greek debt crisis is an effort to demonstrate a principled approach to their supporters as well as a way to push up the party’s current approval with Slovak voters.

During the July 1 parliamentary debate over his powers, Mikloš said that another loan for Greece is an effort to buy time which, if used correctly, might develop into the lesser evil and be the cheapest way of resolving the issue of a potential default by the Greek government.

Mikloš admitted there is a real risk that the Greek government will not be able to achieve the required savings and may not be able to repay the loan.

“I agree it is questionable whether or not the Greeks will be able to introduce the reforms and austerity measures that will allow them to come out of this and make a comeback on the markets in 2015, even if they are given a new loan,” Mikloš stated, as quoted by the TASR newswire.

The resolution that SaS sought to push through parliament would have established five conditions to be attached to the multi-billion-euro loan for Greece. Mikloš opposed one of these conditions, a reduction in the nominal value of bonds held by Greece's creditors, which Mikloš said would automatically lead to a Greek default. He said that requiring such a condition is not negotiable in Brussels. Nevertheless, even after the resolution was defeated Mikloš said he would push for strong participation by the private sector and by the International Monetary Fund, as well as privatisation of state property, sufficient collateral, and austerity measures being adopted by the Greek government, TASR reported.

SaS deputy Jozef Kollár said that his party must respect parliament’s decision, adding that his party had “fought against the loan for Greece to the very last drop of our blood”.

KDH deputy Radoslav Procházka told the media that Slovakia’s participation in the EFSF and its contribution towards a new loan for Greece is not primarily a legal or economic issue but rather a matter of strategic importance for Europe.

“There's still a price that we can pay today for a chance that our children and grandchildren will not remember Europe as we know it today but only with painful nostalgia,” Procházka stated, as quoted by TASR.

Is bankruptcy the right option?

Sulík, the chairman of SaS, has several times said that a Greek government default on its debts is the only sensible way out of its current problems and that prolonging the country’s agony via further loans would cause only greater damage. Sulík has argued that no one has proved that Greece will be capable of repaying a second loan.

“I guarantee that none of you would send your own money under these conditions to Greece,” Sulík stated, as quoted by SITA. “I do not understand why we should treat the money of taxpayers irresponsibly.”

Mikloš argued that accepting the SaS proposal would result in an uncontrolled bankruptcy of the country that could also bring countries such as Spain or Italy to their knees.

Vladimír Vaňo, chief economist with Volksbank Slovensko, said the scenario of a Greek government default would forever compromise the credibility of the common European currency, with several ensuing consequences.

“It would spell another recession in the eurozone with consequent aggravation of fiscal deficits and the public debt situation,” Vaňo told The Slovak Spectator. “Apart from negative consequences for labour markets, such a scenario would require significantly more severe restrictive fiscal measures within eurozone members, in addition to Greece, Portugal and Ireland, to avoid widening of their budget deficits to unsustainable levels.”

Vaňo added that Jean-Claude Trichet, the president of European Central Bank, has pointed out that Europe should avoid flirting with steps that might have unforeseeable adverse consequences.

The failure to provide an additional loan to Greece, Vaňo said, would mean that the worst case scenario facing Greece would most likely also influence the fates of Ireland and Portugal, which are also dependent on support from the EFSF.

Vaňo noted that, according to data from the International Monetary Fund, one-quarter of the aggregate foreign exchange reserves held by central banks around the globe are denominated in euros, that is in government bonds issued by eurozone countries.

Vaňo explained that the extent to which this would increase the cost of servicing a country’s existing public debt would vary depending on the [credit] rating of the individual countries but that at the end of last year the total debt of eurozone members amounted to 85 percent of their aggregate GDP.

“More importantly, the worst case scenario in Greece would overshadow the impact of Lehman Brothers [bankruptcy] and would push the eurozone back into recession,” he said. “This would not improve the situation of the public finances of the other member countries, but on the contrary would significantly aggravate the eurozone debt crisis even beyond Greece, Ireland and Portugal.”

Is it populism by SaS?

While some critics have said that the SaS’s position is only driven by efforts to pump up its popularity, political analyst Kusý suggested that this is only a part of the story.

“The SaS wants to renew its damaged position with its voters by showing them that the party is taking a principled approach,” Kusý told The Slovak Spectator.

Kusý added that he believes SaS desperately wants to elevate its approval rating, which has been dropping, and is therefore taking steps that it believes will return the party to the level of support it achieved in the 2010 election.

Grigorij Mesežnikov, president of the Institute for Public Affairs, stated that appealing to popular sentiment played a lesser role in SaS’s parliamentary position, while noting that the majority of Slovak citizens are against an additional loan to Greece.

“I assume it is a doctrinal issue for SaS that springs from its ideological footing and its [members’] professional qualifications,” Mesežnikov told The Slovak Spectator.