ON MONDAY, July 4, about 350 people from Prievidza, Partizánske and the surrounding areas rallied in front of the Health Ministry in Bratislava to protest against the closure of several departments at their local hospitals. They also delivered petitions signed by 42,000 people against the move, which they fear will endanger the availability of health care in the region. Health Minister Ivan Uhliarik did not meet the protesters as he was away on holiday, the SITA newswire reported. 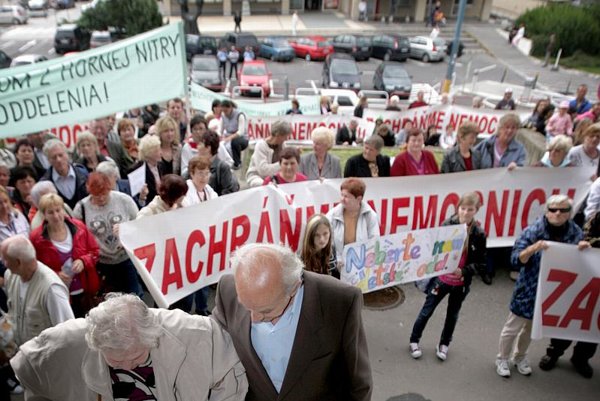 ON MONDAY, July 4, about 350 people from Prievidza, Partizánske and the surrounding areas rallied in front of the Health Ministry in Bratislava to protest against the closure of several departments at their local hospitals. They also delivered petitions signed by 42,000 people against the move, which they fear will endanger the availability of health care in the region. Health Minister Ivan Uhliarik did not meet the protesters as he was away on holiday, the SITA newswire reported.

“We in Partizánske as well as in Prievidza have decided that we will not silently listen to this dictatorial and arrogant decision-making from a green table but will unambiguously voice our opinion,” Jozef Božik, mayor of Partizánske, said, as quoted by SITA.

He called on Minister Uhliarik as well as the management of Slovakia’s biggest health insurance company, Všeobecná Zdravotná Poisťovňa (VšZP), to thoroughly think over their steps. “What they are permanently and constantly repeating, that there were negotiations with the leaderships of the self-governing regions, was not a negotiation but announcement of a diktat, [deciding] which departments will be closed down and which will remain.”

The original plan in Partizánske was to close down three hospital departments: otolaryngology, urology and follow-up treatment. But it was later announced that the children’s, neonatal and gynaecological-obstetric departments would also be shut, Partizánske citizens complained at the rally.

In the case of Partizánske, the optimisation plan foresees a reduction of 70 beds, or roughly one third of total hospital capacity, according to the Aktualne.sk news website.

The Health Ministry revealed on July 4, in response to the rally, that VšZP had found that the hospital had failed to ensure adequate performance by the departments slated for closure under the scheme.

Reduction in beds, but not hospitals

The Health Ministry arrived at its plan to reduce the number of beds in mid March. Closure of departments and beds will precede the transformation of hospitals into joint-stock companies, according to Minister Uhliarik. This should happen by the end of the year, according to the Sme daily.

The reason behind the reduction is, among others, a lack of funds and the anticipation that payments from health insurance companies will not increase in the very near future, SITA wrote on June 17.

“Basically this does not mean closure of hospitals as whole units,” explained the Health Ministry. “This will be a reduction in those departments which are not effective.”

Moreover, the Health Ministry’s plan is to support and extend one-day medical treatment and provision of treatment in outpatient departments in order for patients to continue to get the majority of care in their own regions. On the other hand, the ministry stated that specialised and medically and financially-demanding treatment should be centralised because only under such conditions can the highest quality be provided.

The list of departments with which VšZP did not intend to extend contracts on provision of healthcare was revealed in mid June.

“After the optimisation there will be no cuts in funds: VšZP guarantees this,” VšZP director general Marián Faktor promised on June 17, as quoted by TASR, indicating that payments will be moved from hospital departments to one-day treatment. VšZP’s contracts with hospitals account for €30 million. VšZP management has promised to maintain this amount.

VšZP decided which departments it would terminate contracts with after checks at individual hospitals. According to its findings, some hospital beds are used less than 50 percent of the time. According to VšZP, 28 percent of departments did not meet requirements in terms of materials, technologies as well as personnel, the TASR newswire wrote.

Among OECD member countries, Slovakia has a relatively high average number of hospital beds. While across the European Union the average is 5.7 beds per 1,000 citizens, in Slovakia it is 6.6 beds, VšZP says.

The other two health insurers, Dôvera and Union Zravotná Poisťovňa, which are both private, have agreed to the reduction plan.

“We welcome the proposed changes in hospitals,” said Miroslav Žilinek, the director of the department for purchase of heath care in Dôvera, as quoted by SITA. “These are an inevitable step to increasing the quality and effectiveness of health care and improving conditions for medical workers in Slovakia.”

Dôvera has already stopped working with 25 of the 156 departments that are due to go.

On the other hand, the reduction plan is regarded negatively in the regions, as well as among many medical workers. There are concerns that the closures will mean patients will need to travel long distances to get proper care. The loudest protests against the reduction in beds have come from psychiatrists and geriatricians, medical professionals who care for the elderly.

The committee of the Slovak Psychiatric Association of the Slovak Medical Society opposes the plan to cut psychiatric beds in hospitals. On June 30 it adopted a statement which said that incompetent reduction of these beds could lead to the violation of the right of patients to accessible, elementary psychiatric care, SITA wrote.

Štefan Krajčík, the senior expert for geriatrics at the Health Ministry, has also voiced his disagreement with a reduction in the number of geriatric beds.

“The proposed reform does not take into consideration specific features of geriatric care and violates continuity of care for geriatric patients,” Krajčík said in late June, as quoted by SITA. He pointed to the aging demographics in Slovakia and said he believes the reduction of departments for treatment of long-term patients will have a number of negative consequences.