ONE of the most closely-watched pieces of legislation prepared by the government of Iveta Radičová, a major revision to the Labour Code, has made it through parliament. The bill, which introduces some significant changes to the labour law – last modified under the government of Robert Fico, Radičová’s predecessor – received the votes of 74 MPs on July 13, with 70 MPs voting against, and no abstentions. The opposition Smer party said after the vote that the amended Labour Code damages the interests of employees. 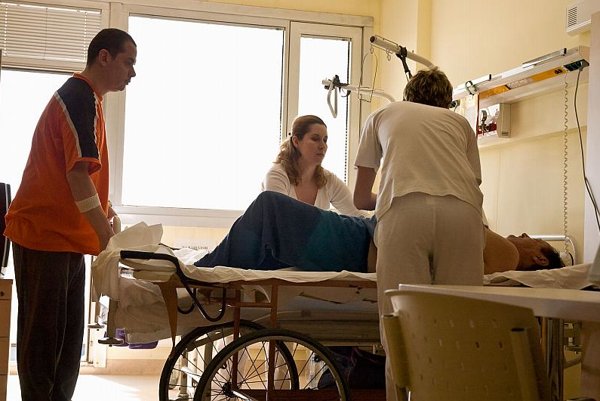 The changes in the Labour Code will affect many kinds of employees, including those who work in nursing. (Source: Sme - Gabriel Kuchta)
Font size:A-|A+0

ONE of the most closely-watched pieces of legislation prepared by the government of Iveta Radičová, a major revision to the Labour Code, has made it through parliament. The bill, which introduces some significant changes to the labour law – last modified under the government of Robert Fico, Radičová’s predecessor – received the votes of 74 MPs on July 13, with 70 MPs voting against, and no abstentions. The opposition Smer party said after the vote that the amended Labour Code damages the interests of employees.

If the legislation is signed by President Ivan Gašparovič, the new code will become effective on September 1, 2011. Members of the governing coalition have already expressed doubts about whether Gašparovič will sign the bill into law.

After MPs from the Christian Democratic Movement (KDH) and Freedom and Solidarity (SaS) did not support independent MP Igor Matovič’s proposal for employers to scrap meal vouchers and give employees money directly for meals, Matovič threatened that MPs from his Ordinary People faction would vote against the Labour Code amendment. Nevertheless, the amendment passed.

The changes introduced by the amendment to the Labour Code, in a nutshell, include: either severance pay or a layoff notice period but not both; longer periods for fixed-time employment; longer layoff notice periods for long years in the same job; more protection for mothers and pregnant women; small unions will have less voice in the workplace; a 3 percent limit on the margin for companies selling meal vouchers; longer overtime hours permitted; easier drawing of compensatory leave; less pay for overtime work; more night shifts allowed; a longer probationary period for managers; five weeks of holiday for employees age 33 and older; elimination of special advantages state managers; and approval to share one work position among two or more employees.

Labour Minister Jozef Mihál said he is convinced the approval of the amendment approval is good news for Slovakia. He said the changes will contribute to creation of some tens of thousands of new jobs.

“It is a distinct and very important signal for everyone considering investing in Slovakia or Europe or another country of the world,” he stated after the Labour Code’s approval, as quoted by the SITA newswire.

“I think that the Labour Code could boost employment and increase certainty of employees in their jobs,” Radičová stated. “The legislation is more accommodating towards employees and families and it protects those who need it.”

Béla Bugár, the chairman of Most-Híd party, one of the governing coalition parties, expects Gašparovič to veto the amendment.

“Knowing our beloved Mr President, he will veto it,” Bugár said, as quoted by SITA. “We'll have to find 76 MPs [to re-adopt a vetoed law],” adding that it may be difficult to find those votes but he is convinced the coalition will succeed.

The chairman of Smer party, Robert Fico, blamed Matovič and his Ordinary People faction, stating that the group had not acted in a principled manner by letting the bill pass even though they had stated they would withhold support if their particular demands were not met. Fico added that he found it outrageous that the amendment was adopted even though the faction had conditioned its support for the bill by achieving four demands and earlier votes by MPs from the ruling coalition had killed three of these demands.

The TASR newswire reported that Fico stated that the four MPs from the Ordinary People faction did not attend the vote and if they had been there and voted against the bill it would not have passed.

“It had never happened before that in the case of such an important law, the quorum was lowered and the legislation was passed with a smaller than absolute majority vote,” Fico stated, as quoted by TASR. The Slovak parliament has 150 members.

The National Union of Employers (RÚZ) stated after the vote that the amendment will create better conditions for new jobs but it also offered objections to some of the changes.

“The revision in some of its provisions is not ambitious enough and does not always reflect all the fundamental demands of employers,” RÚZ said in its official statement. “Keeping the minimum wage requirements in the Labour Code will definitely have negative impacts on the labour market.”

RÚZ was also critical of the introduction of a five-month layoff notice period for employees who have worked for a company for more than 20 years.

Meanwhile, Slovakia’s trade union confederation announced that it would consider abandoning tripartite social dialogue with the Labour Ministry and representatives of employers, in response to passage of the amendment.

"I'll propose leaving the tripartite, interrupting the social dialogue, because this is seriously trampling on social dialogue," said Emil Machyna, the president of the KOVO trade union.

Machyna added that the trade unions may organise activities to apply pressure in the autumn, in September at the earliest. “These protests can't be prevented any more, as parliament approved a Labour Code that "tramples on employees' rights", Machyna stated, as quoted by the TASR newswire reported.

The SITA newswire reported that the Entrepreneurs Association of Slovakia stated that changes in the Labour Code are not anything radical over which the unions should interrupt social dialogue or organise strikes and pressure actions.

“On the contrary, we have expected from the parliament and government much more courage and more substantial modernization of this key labour legislation,” the association stated, as quoted by SITA.

Fico restated to the media after the vote that the revised Labour Code unambiguously benefits employers and that should not be the law’s role.

“Rights in the Labour Code are the property of employees,” Fico said as quoted by SITA. “The government has taken away this ownership in form of rights which had been guaranteed by the Labour Code.”