Reduta to return to historical form

The Reduta, the long-time home of the Slovak Philharmonic, has been undergoing a complete renovation that will bring the national cultural monument much more in line with its original designs conceived at the beginning of the 20th century. 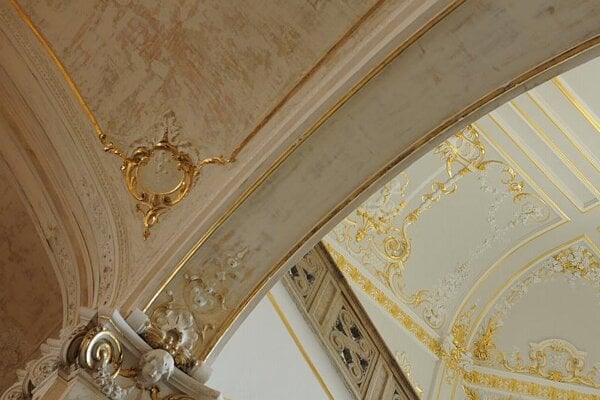 The Reduta, the long-time home of the Slovak Philharmonic, has been undergoing a complete renovation that will bring the national cultural monument much more in line with its original designs conceived at the beginning of the 20th century.

The new structure was originally reconstructed from a granary from the time of Maria Theresa as a site for theatre and dance events. It was named Reduta after other large theatrical venues of the time, mainly in Vienna. Though plans and designs were completed in 1910 the actual construction did not begin until 1913. When World War I began, much of the funding for the project evaporated.

The original plan to gild the elaborate inner decorations with actual gold had to be abandoned in favour of a kind of brass dust which faded quickly into an unattractive shade of brown. Other metallic substitutes were tried but these too deteriorated over time and turned to rust. Thus, the popular legend that the interior of the Reduta was gilded with gold was, in fact, false.

Following the World War I, the complex was converted into a movie theatre, the largest in Bratislava with some 900 seats. The building then underwent other transformations, later serving a commodity exchange and then a bank.

The state Slovak Philharmonic was established after World War II and in 1949 it moved into the Reduta. Although included in the original plan, an organ was not installed until 1956 and then the instrument turned out to be too large and never quite fit in its allotted space.

The current renovation of the Reduta was launched on December 1, 2009. Since then, the Slovak Philharmonic has been housed in the historic Slovak National Theatre building just opposite the Reduta.

Current plans call for comprehensive renovation of the buildings walls and layout, re-gilding reliefs and decorations with 23.8-carat gold this time, a new organ that actually fits into its space, and a huge piano lift. Altogether, 12,440 square metres of Rococo stuccos and rocailles were renovated and gilded by hand. The culture ministry is financing the reconstruction along with the European Economic Area Financial Mechanism and the Norwegian Financial Mechanism, the SITA newswire wrote. Renovation costs have risen significantly since construction began and construction coordinator Rudolf Modranský ascribed this to unexpected problems that arose in the course of the work.

The increased costs have been approved and the Reduta is expected to open on January 26, 2012. Slovakia’s Monuments’s Office has overseen the entire reconstruction.