The Slovak premiere of the movie Cigán (Gypsy) opened to much fanfare on July 12 in Richnava, the village where the film was shot. The largely-Roma community was electrified and excited as they prepared to welcome the cast and crew of the film as well as a huge crowd of other visitors, including artists, journalists and film buffs. 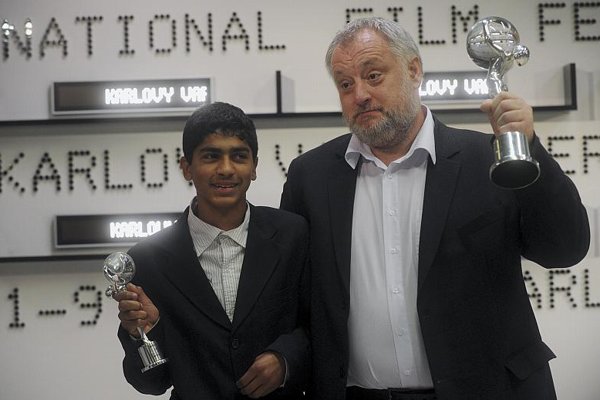 The Slovak premiere of the movie Cigán (Gypsy) opened to much fanfare on July 12 in Richnava, the village where the film was shot. The largely-Roma community was electrified and excited as they prepared to welcome the cast and crew of the film as well as a huge crowd of other visitors, including artists, journalists and film buffs.

The movie, directed by Martin Šulík, takes a look at life in a Roma village. Locals were happy to welcome the big crowd to their community and they did their best to put a good face on their town. They gave the settlement a good scrub-down but they were not able to fully cover up the poverty that afflicts the community.

Though the settlement has electricity, water is available only from two wells. There is no sewer system. Of Richnava’s 2,500 residents, about 1,700 are Roma. Mayor Vladimír Pokuta hopes the movie will draw more attention to Richnava and its problems.

“This movie cannot solve all the Roma problems but I believe that it can open a dialogue between the majority and these people,” Šulík told the SITA newswire. He also said in an interview with the Sme daily: “We should stop thinking only about the racial aspect of the problem. What happens in these settlements is a reflection of our whole society... There are rich Roma in Spišský Štvrtok, in nice houses: businessmen communicating with their neighbours without any trouble. And then there are Roma in Letanovský Mlyn, just a few kilometres away, who have no electricity, who live in wooden houses and have no jobs. We did not think about political correctness when making the movie; we tried to depict the situations as truthfully as possible and with all the correlations and connections which were on our minds.” Marek Leščák, the script-writer, told Sme: “Our film is bad news. About Roma and non-Roma alike. This is exactly why it is high time to start seriously addressing this problem.”

The premiere was a huge draw for Roma and non-Roma citizens alike. People arrived in droves, not only from nearby localities, but from Košice, Spišská Nová Ves and other large towns as well.

“It was great to sit in a friendly atmosphere and have fun together,” Ľuboš Bišto from Košice told SITA. “It was a splendid idea to hold the premiere here.” A concert before the screening featured Chiki liki tu-a and a Roma group, Dáša & Negativ.

The crowd estimated at several thousand attentively watched the film and most praised it.

Šulík said he was eager to see how the film would be received by people from the settlement, many of whom served as extras in the film. He said he hoped that the making of the movie and the movie itself have affected locals in a positive way.

Earlier the film and the acting by Ján Mižigár, the principal character in the film, received a Special Jury Award and Special Mention at the International Film Festival in the Czech town of Karlovy Vary. Mižigár, a Roma, had never acted professionally before.

The film opened in Slovak cinemas on July 13 and has been invited to Toronto, Canada and to other foreign film festivals.

Šulík said that the film cost about €1 million to make.