THERE IS now a global economy and neither large nor small countries can avoid this reality. Transportation systems of the 21st century have shortened distances, opening more and more global business opportunities and offering opportunities for intensive business contacts between even distant countries like China or Taiwan in Asia with Slovakia in Europe. These growing global interrelationships are attested to by the arrival of several major Taiwanese companies in Slovakia, by the establishment of a new Slovak-Taiwanese Chamber of Commerce as well as by plans to build a Chinese business centre in western Slovakia for the country to gain better access to Europe. 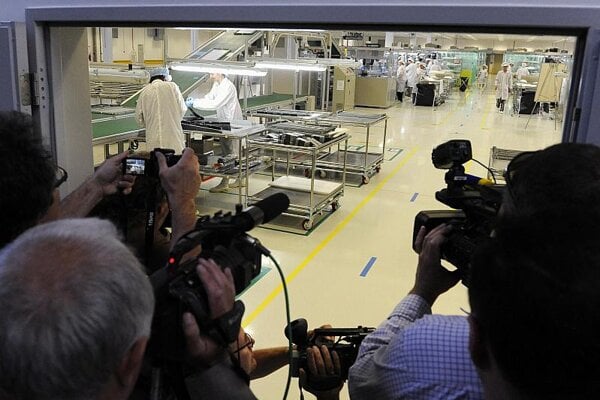 THERE IS now a global economy and neither large nor small countries can avoid this reality. Transportation systems of the 21st century have shortened distances, opening more and more global business opportunities and offering opportunities for intensive business contacts between even distant countries like China or Taiwan in Asia with Slovakia in Europe. These growing global interrelationships are attested to by the arrival of several major Taiwanese companies in Slovakia, by the establishment of a new Slovak-Taiwanese Chamber of Commerce as well as by plans to build a Chinese business centre in western Slovakia for the country to gain better access to Europe.

“Slovakia is the gateway to Europe for businesspersons from Taiwan and Taiwan serves Slovaks as the gateway to Asia,” said MP Ivan Štefanec, the head of the Slovakia-Taiwan Friendship Group in the Slovak Parliament, as he led a parliamentary delegation to Taiwan in March, as cited by the SITA newswire.

The intensified business ties between Taiwan and Slovakia were also marked by the launch of the Slovak-Taiwanese Chamber of Commerce in Slovakia in mid July. Its founding members include AU Optronics, Foxconn, Delta Electronics, Eson, China Airlines and Eva Air, all Taiwan-based companies, along with the Taipei Representative Office, the Slovakia-based representation of the Government of the Republic of China (Taiwan), the SITA newswire, and the Slovak Union for Small and Medium-Sized Businesses, the chamber wrote in a press release.

The idea to launch a chamber of commerce emerged at the beginning of 2011, by which time investments by Taiwanese companies in Slovakia had reached a total of €450 million and had created thousands of jobs in Slovakia.

The Taipei Representative Office, led by David Nan-Yang Lee, has been one of the promoters of this idea, while communication with the Slovakia-Taiwan parliamentary group led by Štefanec helped in the process of forming the chamber.

The main goals of the chamber are to represent Taiwanese businesses with investments in Slovakia, to help develop conditions for the arrival of new investors, and to interconnect small and medium-sized businesses in both countries so that Slovak companies can better establish themselves in the Asian market.

There have been four large Taiwanese investments in Slovakia to date. As David Nan-Yang Lee told the TA3 TV news channel on July 13, three of these firms are members of the Top 30 companies in Taiwan in 2010: Foxconn in Nitra is the biggest, followed by AU Optronics in Trenčín and Delta Electronics in Dubnica nad Váhom. As large international companies with capital, technologies and know-how, Nan-Yang Lee believes that if Slovakia offers a good investment environment these companies will extend their investments and draw other subcontractors to Slovakia.

The Slovakia-Taiwan Friendship Group has operated within Slovakia’s parliament for three election terms and Štefanec is serving a fifth year as chairman of the group. He explained to TA3 that he has actually been substituting for the executive branch in joint contacts as Slovakia and Taiwan do not have any official diplomatic contacts.

“We are trying with our laws to create a favourable environment for new investors in Slovakia as well as for our companies so that they can make investments in Taiwan,” Štefanec told TA3.
Štefanec stressed that Taiwanese companies have picked Slovakia, in many cases, as their first European destination for investment.

AU Optronics Slovakia in Trenčín is the most recent Taiwanese firm to invest in Slovakia, with its production facility being ceremonially opened on June 28.

AU Optronics, the third-biggest producer of liquid crystal display monitors in the world, expects to create 1,300 direct and 2,000 indirect jobs in Trenčín, with around 1,500 employees to be recruited by the end of 2011. Around 2.4 million LCD modules and LCD TV sets are to be produced at the assembly plant every year, including all the associated metal and plastic parts. AU Optronics will invest more than €191.3 million over three years, the TASR newswire reported.

“As AU Optronics’s major European production base, AU Optronics Slovakia is responsible for the manufacturing of large-sized LCD modules and assembly of TV sets,” Lenka Wangová Kližanová from the company’s corporate communications division told The Slovak Spectator. “Mass production started in May 2011, when the first shipment was delivered as well. ”

Delta Electronics (Slovakia) announced an expansion of its production plant in Dubnica nad Váhom at the beginning of this year.

“We see expansion opportunities for the factory in Slovakia,” Daniel E. Heri, managing director of Delta Electronics (Slovakia), told The Slovak Spectator in explaining the reason for expanding the plant. “But we can only realise these new projects if we have more space and new equipment available.”

Delta Electronics plans to start construction within this quarter, with production in the new building planned for second quarter of 2012.

The Chinese economy is expanding rapidly and Slovakia may become this country’s gateway to the rest of Europe. Slovak media reported in early July that plans to build a European Chinese business centre near Senec in western Slovakia are in the works, with the aim to help Chinese businesses to better penetrate European markets. The plans foresee that by next year hundreds of Chinese companies from banks to carmakers could be clinching various trade deals at the business centre near Senec, the Hospodárske Noviny daily wrote.

“The centre will be the biggest in Europe and will create space for companies so that they can extend their contacts into the European market,” said Vladislav Khabliev, the legal representative of UMC Slovakia, a TV producer, which is behind the project, as quoted by the daily.

Khabliev said he had signed an agreement with Anhui Publishing Group, a Chinese financial company, in late June which could begin to draw companies to Slovakia, noting that the Bank of China, various manufacturers, warehouses and Chinese carmakers could be among them.

Hospodárske Noviny wrote that the project’s budget is €100 million and that the Chinese chose Senec in Slovakia because of its location, near to the borders of Hungary, Austria and the Czech Republic as well as to Vienna Airport.

The centre is projected to cover 17 hectares and may consist of 300,000 square metres of office and exhibition space. The project will be developed by Ipec Group and construction may begin next year, the daily wrote.

Slovak Economy Minister Miškov said last September that it is a pity that there are currently only a few Chinese investors in Slovakia at this time, with Lenovo being the best known. The ministry, as well as the Slovak Investment and Trade Development Agency (SARIO), noted that there is some interest from Chinese investors but Róbert Šimončič, SARIO’s director, told the SITA newswire that attracting Chinese investments is not an easy task.

“This is not an area in which SARIO primarily operates,” Dírer said. “The Chinese expect that SARIO can offer them a specific project into which they can invest their money.”