CHANGES in how Slovakia’s judiciary operates will continue to be pursued by Justice Minister Lucia Žitňanská. After she was successful in getting amendments to the laws governing judges and prosecutors’ offices passed by parliament, she announced in early July that she will seek to amend Slovakia’s constitution to assure that one person cannot simultaneously fill the position of Supreme Court president and the chair of the country’s Judicial Council. Both posts are currently held by Štefan Harabin. In addition she proposed that judges should receive regular evaluations of their work, conducted by three different evaluators. 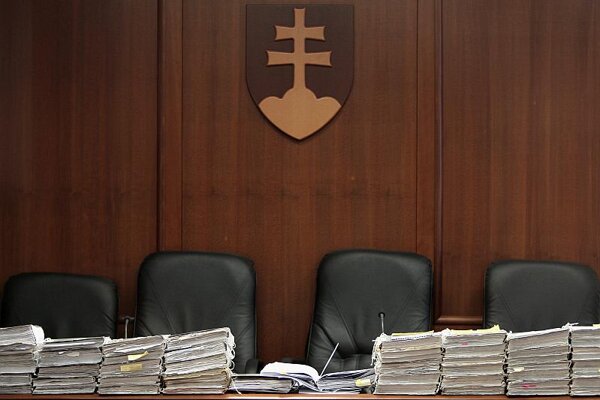 CHANGES in how Slovakia’s judiciary operates will continue to be pursued by Justice Minister Lucia Žitňanská. After she was successful in getting amendments to the laws governing judges and prosecutors’ offices passed by parliament, she announced in early July that she will seek to amend Slovakia’s constitution to assure that one person cannot simultaneously fill the position of Supreme Court president and the chair of the country’s Judicial Council. Both posts are currently held by Štefan Harabin. In addition she proposed that judges should receive regular evaluations of their work, conducted by three different evaluators.

The main opposition party in parliament has already announced that its MPs will not support the first proposal, while Harabin has accused the justice minister of seeking personal revenge against him. But the idea of regular evaluations for judges may get a smoother ride in parliament.

When Slovakia’s Judicial Council elected Štefan Harabin, who at the time was justice minister, to the post of Supreme Court president on June 22, 2009, it also automatically made him the head of the council, which oversees the operation of all courts in Slovakia. At the time several non-governmental organisations held protests in front of the Justice Ministry, where the Judicial Council was meeting, and the-then opposition parties – now mostly in government – joined the criticism of Harabin’s selection.

A year later the new government took power and the Movement for a Democratic Slovakia (HZDS), which had nominated Harabin to the justice ministry post, failed to make it into parliament. The incoming government’s programme statement featured several bold changes that it would seek to make to Slovakia’s judicial system.

The government pledged to amend the rules so that a person would no longer be able to switch immediately between posts in the judicial and executive branches. The four parties in the governing coalition also promised to exclude the heads and deputy heads of courts from holding posts in the judiciary’s self-governing bodies and proposed to stop the same person acting simultaneously as head of the Judicial Council and the Supreme Court by pursuing “a constitutional proposal for the Supreme Court president not to be the chair of the Judicial Council”.

This change has now been proposed by Minister Žitňanská, along with two further requirements: that votes taken by members of the Judicial Council be publicly recorded, and that the council publish information about the items it discusses.

“If the Judicial Council is to have any sense, these positions need to be separated,” the minister said, as quoted by the SITA newswire.

The separation of the two posts currently held by Harabin will require an amendment to Slovakia’s constitution and it does not seem likely that the justice minister will be able to find the 90 votes needed in parliament to pass a constitutional amendment.

MP Robert Madej, who serves as shadow justice minister for the opposition Smer party – at least some of whose MPs’ votes would be needed to secure 90 votes in parliament – said that his party will not support the amendment and believes it is a further politicisation of the judiciary.

“It’s a fight against one person in the judiciary, which again betrays the coalition’s frustration over Mr Harabin,” Madej said, as quoted by SITA. He also stated that the current system, whereby the Supreme Court president also heads the Judicial Council, was introduced and promoted by the first government of Mikuláš Dzurinda from the Slovak Democratic and Christian Union (SDKÚ) in 2001.

Harabin reacted that he regarded Žitňanská’s proposal as personal revenge against him.

The proposed evaluation system for judges is a change that might have a chance of passing in parliament since many persons inside and outside government and the judiciary consider the current system to be non-functional.

“If judges want an individual approach to their work and if we want to do away with the simplification that an error of an individual judge is an error of all judges then we need to give the evaluation system real content and make the results accessible to the public,” Žitňanská stated as she set out her proposal.

The Justice Ministry proposal would require evaluation of a judge every five years, with the judge receiving one of three grades: excellent, good, or fail. Receiving the ‘fail’ grade would be regarded as a disciplinary offence. If a judge gets failing grades three times, consecutively or otherwise, he or she would be dismissed.

Judges would receive points from three different evaluators: an evaluation committee created by the Judicial Council to evaluate the judge’s fluency and dignity in leading court proceedings; by the president of the college of judges, who would evaluate statements of appellate courts and the judge’s compliance with judicial ethics; and the judge’s court president, who would primarily evaluate whether there had been unnecessary delays or procrastination. If a judge disagreed with the latter person’s evaluation, he or she could turn to the Judicial Council to review the accuracy of the evaluation.

Slovak judges appear to be split over the proposed evaluation system. While judges who are part of the For Open Justice initiative have said they agree with the proposal, the Association of Judges of Slovakia has stated its opposition.

“There are judges among us who for a long time have been professionally proving that they should be excluded,” Judge Katarína Javorčíková from the For Open Justice initiative told the Sme daily.

But Judge Dana Bystrianska from the Association of Judges of Slovakia fears that the evaluation system could be abused by judges' superiors, adding that judges are facing a work overload.

“They have more duties than their human powers are fit to bear,” Bystrianska told Sme.