Press and courts tangle once again

REPORTING about the salaries of public servants might be a risky journalistic undertaking in Slovakia. A police investigator has accused a reporter working for Sme, a major daily newspaper, of unauthorised use of personal data in writing a story that included information about the salary paid by the Justice Ministry to the wife of Supreme Court President Štefan Harabin. 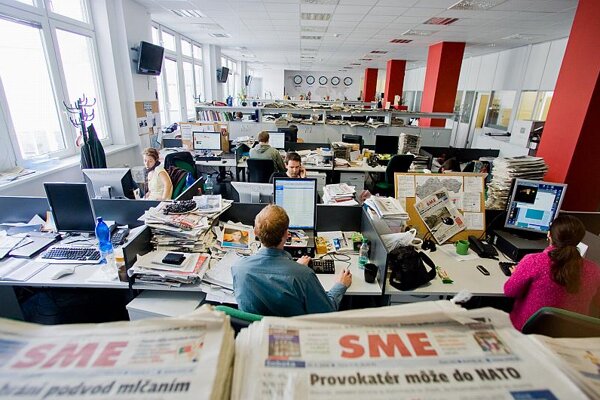 REPORTING about the salaries of public servants might be a risky journalistic undertaking in Slovakia. A police investigator has accused a reporter working for Sme, a major daily newspaper, of unauthorised use of personal data in writing a story that included information about the salary paid by the Justice Ministry to the wife of Supreme Court President Štefan Harabin.

Nearly concurrently, the European Court of Human Rights released an unanimous decision finding that Slovak courts had erred in a 2003 libel case brought by a former vice-president of Slovakia’s Police Corps.

Sme insists that its journalist should not be punished for doing her job and the Slovak branch of the International Press Institute (IPI) and the Association of Publishers of Periodical Press have protested that the charges against the reporter are unacceptable.

The police took action against reporter Zuzana Petková, age 36, based on a criminal complaint filed by Harabin, who stated that his wife Gabriela Harabinová was only a normal employee of the Justice Ministry and that information on her salary should not have been published without her consent. Now, however, Harabin has called the charges against the journalist “absurd” and has directed his wrath at representatives of the Justice Ministry for releasing the salary information.

Sme ran Petková’s story on October 17, 2010 and the information on Gabriela Harabinová’s salary was provided by the Justice Ministry.

Charging a journalist for doing her job and writing information in the public interest is unfortunate and even dangerous, said editor-in-chief of Sme, Matúš Kostolný, in a video published by the daily.

Kostolný added that the charges are particularly unfortunate because the police did not even go after the right person, since it is not the reporter who actually publishes the information but rather the editor-in-chief, and if action was to be taken it should have been against the publisher of the newspaper and not the reporter.

“Yet, we have only been doing our job,” Kostolný stated, adding that last year Sme reported after the change in the government that the wife of the former justice minister and current head of Supreme Court, Harabin, had left her job with the Justice Ministry. “We asked under what circumstances she had been employed there, because the then-minister and later head of the Supreme Court, Harabin, had shown several times that he considered the judiciary to be his own firm.”

Kostolný stated it was completely appropriate for the daily to ask about the employment circumstances of Harabin’s wife, adding that he believes the situation will now take a different course and the reporter will not face any penalty for doing her job.

The Supreme Court Office released a statement by Harabin on August 1 stating that he “as a private individual filed [the complaint] in the case of an unlawful layoff and subsequent scandalising".

“The legal, political and moral responsibility lies with the political nominee and representative of the Ministry of Justice,” Harabin continued in the release. “It is unbelievable that someone who has the right party membership card and acquaintances in the government is above the law.”

Harabin recently stated that the legal responsibility for the release of the salary information lies with the Justice Ministry rather than with the journalist.

Kostolný told The Slovak Spectator, however, that it was Harabin who had filed the criminal complaint and for that reason he should be seen as “the germinator of this absurd situation”, adding that as editor-in-chief he does not want to see his daily dragged into what has been an ongoing battle between the Supreme Court president and the Justice Ministry.

Lenka Škropilová of the Justice Ministry’s press department told Sme that the ministry had no reaction but added that from the very moment the criminal complaint was filed it has been an absurd situation.

A statement released by IPI Slovensko reacted that bringing criminal charges against the Sme reporter “are unacceptable in a democratic state”.

IPI wrote that rulings of the European Court of Human Rights have clearly specified that if journalists are acting in the public interest they are entitled to use personal information about the people they are reporting about.

IPI Slovensko added that if the executive and the judiciary in Slovakia imagine reform and cleansing of the police, prosecution and judiciary in a way that it will again be possible to punish journalists for their revelations and efforts to defend the public interest then the country is moving in the wrong direction.

Contemporaneously with the controversy surrounding the Sme journalist, the European Court of Human Rights (ECHR) in Strasbourg issued a ruling supporting one of the other major publishers in Slovakia. The European court found that Slovak courts had violated the publisher’s right to freedom of expression and information by ordering that a correction be printed and compensation be paid to a former vice-president of Slovakia’s Police Corps.

On July 26, a seven-judge panel of the ECHR unanimously overruled the Slovak courts’ decision against Ringier Axel Springer Slovakia, a Bratislava-based multimedia publishing company, citing a failure by the Slovak courts to examine whether the stories were written in good faith and in accordance with journalistic ethics, according to a release from the International Press Institute (IPI).

Pavol Múdry of IPI Slovensko said that his organisation “welcomes the Strasbourg court’s decision as a clear expression of guidance for Slovak courts and great step forward for the stabilisation of press freedom in the country”.

The Slovak tabloid Nový Čas, along with its internet version, published a series of articles in 1999 reporting on an incident involving reportedly drunken public behaviour by two high-ranking public officials: Jozef Petráš, a former police vice-president, and Ján Slota, the chair of the Slovak National Party. Though the articles focused mostly on the conduct of Slota, Petráš sued the publisher’s predecessor company for libel.

In 2003 the Žilina District Court ruled that Petráš should receive a printed apology and a correction as well as €33,193 in damages. Ringier appealed the verdict in 2004 and the Žilina Regional Court upheld the ruling of the first instance court but halved the damage award to €16,569, according to an official release from the Ministry of Justice.

The publisher then turned to the Constitutional Court, which rejected its appeal on March 16, 2005. Before the Strasbourg court, the publisher argued that the libel trial was unjust because the courts had one-sidedly shown preference for the plaintiff and had backed up the verdict with contradictory arguments while failing to respect the equality of the defendant before the court, the Justice Ministry’s release states.

The ECHR concluded that the Slovak courts had violated Article 10 of the European Convention on Human Rights and faulted a failure to assess the level of public interest in the articles or to balance it against the interests of the individuals, according to the IPI statement.

The IPI statement added that the Strasbourg judges found that even though the Slovak courts had made reference to the journalist’s good faith and the presence of a public interest, they had failed to take evidence, or make an analysis, or draw specific conclusions from these factors.