THE TRAGIC extremist attacks in Norway on July 22, which ended with 76 people dead, received widespread response in Slovakia, not only because of the dimensions of the tragedy but also because the murderer, Anders Behring Breivik, had written that Slovakia was the country “least infected with multiculturalism”. 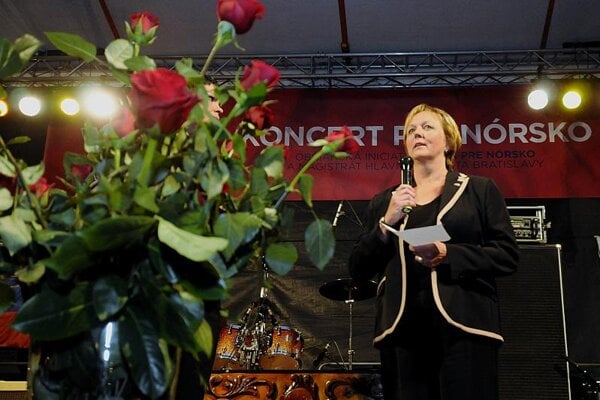 THE TRAGIC extremist attacks in Norway on July 22, which ended with 76 people dead, received widespread response in Slovakia, not only because of the dimensions of the tragedy but also because the murderer, Anders Behring Breivik, had written that Slovakia was the country “least infected with multiculturalism”.

“I was impressed and deeply touched by the strong support and solidarity we received from Slovakia in these difficult times,” Norway’s Ambassador to Slovakia, Trine Skymoen, told The Slovak Spectator. Skyomen said that her country appreciated not only the expressions of sympathy to the families of the victims by many public officials but also the response of average Slovak citizens. She mentioned her appreciation for the Concert for Norway, held at Bratislava’s Main Square on July 31, to commemorate the victims of the massacre on Utoya Island and the bomb attack in downtown Oslo.

The special commemorative concert was organised by a civil initiative called A Rose for Norway that had spontaneously emerged, joined by the Bratislava City Council. The event as well featured a discussion involving representatives of the Norwegian embassy and members of the Norwegian community in Slovakia.

“The square was filled with people and I would like to thank them all for coming,” Ambassador Skymoen said, again giving thanks to the artists, organisers and everyone who contributed to the event.

In the days after the tragedy, candles were lit in front of the Norwegian embassy, people used social networking sites to voice their sorrow, and Norwegian national symbols were worn in solidarity.

“Allow me to emphatically condemn these inexcusable acts of violence and convey my hope that the perpetrators will be brought to justice,” Slovak Foreign Affairs Minister Mikuláš Dzurinda wrote on July 22 in a letter of condolence to his Norwegian counterpart, Jonas Gahr Store, the TASR newswire reported. “Please pass on my condolences to the families of the victims and everyone affected by these violent acts.”

Slovak President Ivan Gašparovič sent a letter of condolence to King Harald V, while Prime Minister Iveta Radičová expressed deep sorrow and sympathy on behalf of Slovakia and its people in a letter to her Norwegian counterpart, Jens Stoltenberg. She also telephoned Stoltenberg on July 24 and offered assistance from Slovak crisis rescue teams and psychologists.

The Slovak town of Martin was particularly touched by the tragedy as it is home to the largest community of Norwegians in Slovakia because the Jessenius Medical Faculty of Comenius University, located in Martin, has attracted over 300 Norwegian students who are studying medicine in the school’s English-language programmes.

“It’s a terrible and incomprehensible tragedy,” the faculty’s dean, Jan Danko, told the Sme daily. “I don’t understand why this happened in Norway of all places. They are such calm and decent people.

Norway has become known as one of Europe’s most distinct examples of an open society based on mutual tolerance and multiculturalism. In the aftermath of the tragedy, media outlets and observers around the globe began speculating whether Norway’s approach is likely to change after the massacre.

“Of course, there will be Norway before July 22, 2011 and Norway after July 22, 2011, the day when the worst tragedy since World War II happened in my country,” Skymoen said in her interview with The Slovak Spectator, but she added that the core values of Norway’s residents will definitely be recognisable even after the attacks.

“The response of the Norwegian people has been very clear: more democracy, openness and freedom,” Skymoen said. “It is perfectly possible to have an open, tolerant and inclusive society and, at the same time, enjoy functional security without being naive.”

Slovakia received a rather odd and somewhat disconcerting mention by the mass murderer, as Breivik wrote in his 1,500-page manifesto that Slovakia topped his ranking of countries “least infected by multiculturalism”.

Slovakia held first place in what Breivik wrote was a survey he conducted on Facebook by contacting “like-minded individuals”. Along with Slovenia, Slovakia scored 90 points out of a maximum of 100, making these the two countries with the lowest level of “multicultural indoctrination”, followed by the Czech Republic with 80 points.

The United States was given 30 points, the United Kingdom 10, and Germany 8, the TASR newswire reported.

In a chapter of the manifesto devoted to right-wing political parties and nationalist organisations, Breivik mentioned several Slovak parties. He described the opposition Slovak National Party (SNS) as a nationalist party and described Vladimír Mečiar's Movement for a Democratic Slovakia (HZDS) as an anti-immigration party with a question mark. The Slovenská Pospolitosť extremist organisation was labelled as a nationalist movement.

This dubious ranking of Slovakia began a media and public discussion about the extent to which principles of multiculturalism are respected within the country.

Slovakia is considered as one of the EU countries with the lowest number of incoming migrants. The Slovak Statistics Office reports that there were 62,882 foreigners with a legal residence permit living in Slovakia in 2009, which is just over 1 percent of the total Slovak population. In addition, two out of every three foreigners living in Slovakia are citizens of EU countries, mostly Czechs, Romanians, and Poles.

Half of Slovakia’s public believe that foreigners steal jobs from Slovaks, according to a research study conducted by the International Organization for Migration among a representative sample of Slovaks. The latest statistics provided by the Central Office of Labour, Social Affairs and Family (UPSVAR) are that only 19,915 legal migrants were working in Slovakia as of April 2011, a negligible percentage of the total Slovak labour force.

“In all societies, there will always be forces which will try to pull the country away from openness and tolerance, but what I have seen here in Slovakia is strong and spontaneous support for the Norwegian people as well as for tolerance, openness and democracy,” Ambassador Skymoen told The Slovak Spectator, adding that after the terrorist attacks Breivik committed and the views he expressed, he should not be listened to by Slovaks or anyone else.

Radka Minarechova contributed to this report