WHAT started as a good idea of using more renewable energy resources in Slovakia is now evolving into charges of corruption and fraud in the construction of photovoltaic power stations. Inspections conducted by the Regulatory Office for Network Industries (ÚRSO) have found that some newly-constructed power stations might not have really qualified for the generous feed-in tariffs they receive, Slovakia’s method of subsidising the use of the solar energy for electricity generation. The Slovak Association of Photovoltaic Industry responded by condemning what it called the failure of certain individuals but cautioned against generalising about the entire solar power sector. 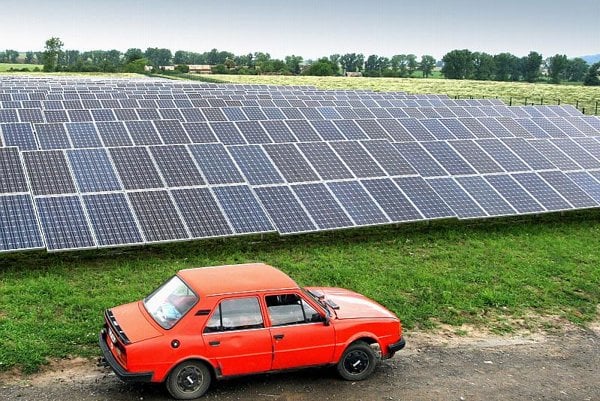 WHAT started as a good idea of using more renewable energy resources in Slovakia is now evolving into charges of corruption and fraud in the construction of photovoltaic power stations. Inspections conducted by the Regulatory Office for Network Industries (ÚRSO) have found that some newly-constructed power stations might not have really qualified for the generous feed-in tariffs they receive, Slovakia’s method of subsidising the use of the solar energy for electricity generation. The Slovak Association of Photovoltaic Industry responded by condemning what it called the failure of certain individuals but cautioned against generalising about the entire solar power sector.

ÚRSO filed a complaint with the General Prosecutor's Office on August 3 asking for an investigation of some local government construction offices which had issued approvals without the necessary documents required to launch a photovoltaic power station.

It also asked the prosecutor’s office to determine whether there had been corrupt practices by other offices involved in issuing documents needed to operate photovoltaic power stations, according to ÚRSO’s press release.

ÚRSO announced partial results of its checks on July 27, stating that it had found problems with 10 percent of the solar power plants it had checked. At that point ÚRSO’s inspectors had reviewed 372 facilities and planned to inspect 18 more facilities during the first week of August in order to finish its review of all solar power plants with an installed capacity of more than 100 kW. On July 1 this level of capacity became the cut-off point for receipt of guaranteed feed-in tariffs. Slovakia has 813 solar facilities with an aggregate installed capacity of 478 MW, according to ÚRSO.

“We found several faults during the inspections,” ÚRSO’s Jozef Holjenčík said at a press conference on July 27. “What is bewildering is that the companies [we] inspected received their final building approvals and went through all tests and in spite of this, the power facilities are not yet completed. Panels and constructions were missing and switchboards were not connected, which means that the facilities have not been finished. They were not capable of producing the declared amount of electricity, as the specific capacity of the panels was not installed.”

ÚRSO found violations in all regions of Slovakia, specifying that solar power stations were in violation in the districts of Trebišov, Komárno, Rimavská Sobota, and Žilina, among others.

At one photovoltaic power station near Brezno people living nearby reported in July that solar panels were mounted only on one side of the plant, the Sme daily wrote. The applicable local construction office as well as Stredoslovenská Energetika company claimed that they issued necessary permissions and documents in line with the legislation. Inspectors and the police will now decide whether the station was completed by the deadline required for qualifying for the subsidised feed-in tariffs, according to Sme.

The installed capacity of the photovoltaic power stations under investigation comes to about 30 MW. Holjenčík indicated that if it is proven that these power stations were not completed by the deadline and did not meet the requirements of the law, they may be disqualified from receiving the generous feed-in tariffs. This may lead to a drop in the aggregate installed capacity of photovoltaic power plants and that may bring a drop in electricity prices beginning either on September 1 or at the beginning of next year.

ÚRSO has also been cooperating with Slovakia’s Anticorruption Office in its investigation.


Lawyer Juraj Bizoň told Sme that the Penal Code has sentences of up to 15 years in prison for financial fraud depending on the damages caused by the fraud. He added that accomplices to a fraud include all those who participated in it in any way, the person who had submitted fictitious documents as well as anyone who had confirmed in documents that a power station had been completed.

“The Slovak Association of Photovoltaic Industry (SAPI) condemns the unfair practices of some individuals who did not respect valid legislation during construction of their solar power plants,” Martin Toman, the deputy director of SAPI, told The Slovak Spectator. “But the association simultaneously protests against generalising from failures of individuals to the whole sector.”

Toman said that SAPI currently has about 40 members and ÚRSO’s suspicions of fraudulent or corrupt behaviour do not involve any of its member companies.

“SAPI welcomes inspections from the side of ÚRSO or the energy inspection authority, which may help to uncover these individual and rare failures,” SAPI wrote in its press release, adding that it is in SAPI’s interest that there is a transparent regulatory environment so that the photovoltaic industry can develop and inappropriate behaviour can be detected and prevented.

Economy Minister Juraj Miškov criticised the previous government of Robert Fico as well as ÚRSO in early July, saying an excessively generous environment was permitted that led to a boom in solar generation and pushed up electricity prices. He said his ministry would conduct inspections of solar power stations on its own. In response, ÚRSO defended the way it had set the feed-in tariffs.

Representatives of solar power stations have stated that they expect the new legislation to halt the growth of the industry for some time.