Our ‘marriage de raison’ has existed for 180 years

SIZE does not necessarily determine the role that countries play on the international stage says Walter Lion, the Belgian ambassador to Slovakia, who explained that smaller countries are often the consensus-makers who are able to encourage other countries to find international compromises. He added that the issue of international migration, which brings both challenges and opportunities, should be addressed at the level of the European Union because it long ago transcended the borders of individual states. 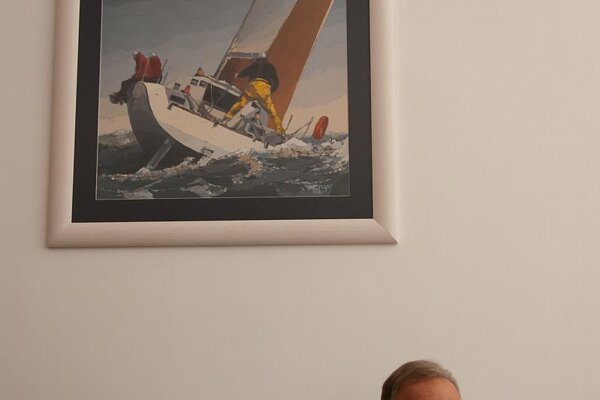 SIZE does not necessarily determine the role that countries play on the international stage says Walter Lion, the Belgian ambassador to Slovakia, who explained that smaller countries are often the consensus-makers who are able to encourage other countries to find international compromises. He added that the issue of international migration, which brings both challenges and opportunities, should be addressed at the level of the European Union because it long ago transcended the borders of individual states.

The Slovak Spectator spoke with Ambassador Lion about the benefits and challenges of living in a multi-lingual country such as Belgium, about the country’s current political environment, and about the importance of regional alliances such as Benelux and the Visegrad Four.

The Slovak Spectator (TSS): Belgium has a truly multi-lingual society but tensions over language have rocked some governments in the past. How is it possible to keep the balance and eliminate tensions between the Flemish, French and German-speaking parts of your country? What lessons could Slovakia learn from Belgium?

While the language issue is a bit more sensitive in Belgium than it is here in Slovakia it needs to be seen in historical context: Belgium was founded on the borderline of Germanic and Latin language communities which resulted in part of the country speaking French and the other part speaking Dutch. Flemish and Dutch are the same language. Having these languages and cultural communities is as well a challenge and a source of enrichment.

Cultural diversity within one’s border allows us to use the best of both.

Besides, we also have a third language community, German, which is spoken in Belgium by a small group of about 50,000 people. These German-speaking Belgians enjoy extensive autonomy. They have their own regional government and have their ministers who can travel abroad and sign treaties, which is unseen elsewhere in the world.

This cultural and language situation makes Belgium unique. The result is a country of hard-working, happy people who, whenever possible, are also able to enjoy life and all it brings: travelling, culture, food and enjoying life in a historically-rich area smaller than Slovakia.

We are actually living without a government. Since last year’s elections, the country’s politicians have been unable to form a new government in these challenging times. Belgium is held together by a ‘marriage de raison’ existing for 180 years. It has not always been an easy marriage. But since the last century there have been less than 10 victims of language clashes as we always keep even edgy issues peaceful: the Belgian compromise!

Regarding the legislation on language use, Dutch is the language of official contacts in the Flemish part, while French is the official language in the Walloon part and German is partly used in the German-speaking part. Brussels is the only exception, as it is a bilingual region where either French or Dutch are the official languages.

TSS: Belgium has been trying to form a government since last June. Why is it so complicated in your homeland and how has this situation affected governing the country?

Our effort to form a new government has up to now been unsuccessful. Firstly, Flanders voted right-wing parties while the Walloons cast their ballots for left-wing parties, pursuing different solutions. The second reason is that our electoral system is more proportional than, for example, that of the UK where the winner takes it all. This is why all our governments are coalition governments, which must have, aside from an overall majority, also a majority both in Flanders and Wallonia.

Thirdly, we have an evolutionary federal state system since the 1970s and about every decade we need to adjust this system to newly created equilibria and refine our constitutional framework. Yet, this is the time when we have to do it. Probably more power will go to the regions and less to the federal state, which is pushed for by the Flemish voters who have a majority in the country since they make up more than 60 percent of the population. Now we are seeking a model which also would be acceptable to French-speaking Belgians. As you see the process of forming a new government in Belgium takes more than in other countries.

That said, Belgium has a caretaker government with a majority in a working parliament. Regional and local governments and institutions are normally active, assuring the country’s continuity. We have managed the European presidency in challenging times, we participated as among the first in joint NATO and EU action in Libya and our economic results are quite good. All this proves that the caretaker government is certainly not slumbering. Of course, the situation is not sustainable over the long term, since the government is unable to take the appropriate measures on future reforms.

TSS: Belgium has had to start dealing with issues of immigration like the rest of Western Europe. Observers say that Slovakia should prepare for an inflow of migrants from less-developed countries as well as it is becoming an attractive destination. How can a country prepare?

Migration is not a national problem but a European one which has its opportunities as well as its challenges. Immigrants, Turks, Moroccans and Algerians among others, make up 10 percent of Belgium’s population. But in fact, our first migrants were not from North Africa, but from Italy, Spain and Turkey and they came because we needed them since Belgium needs a sufficient labour force for its economy to sustain growth, which after the world wars simply was not there. With an aging population in our societies the challenge still exists. However, to welcome immigrants Western European countries have gradually imposed conditions: skills and knowledge, willingness to integrate in our societies, and a contribution to our solidarity mechanisms. This approach is gradually entering the European mind.

Through migration you are creating a multi-cultural society within your own borders and as such there are limits to that. These limits have been overlooked for many years and thus the multicultural society itself has created some additional problems in countries where it exists. In some Western countries multiculturalism has apparently failed and there is a societal debate to accommodate that situation. I believe that we have to address this issue at a European level.

TSS: Slovakia is a member of the Visegrad Group, which is currently trying to redefine its position within Europe. Are groupings such as the Visegrad Group important within the EU? Can you share the experience of Belgium within Benelux?

Belgium, Luxembourg and the Netherlands are among the founding fathers of the European Union. The Benelux cooperation was, however, created earlier. It constituted the basis for a remarkable involvement and influence on the common European adventure by three small countries lying in the heart of Europe. Today Benelux is far more than a forum in which the three countries’ European views are coordinated. Benelux cooperation has led to cross-border cooperation between the three countries in a multitude of areas. Benelux policies, such as Schengen, have very often preceded a European approach.

Benelux has a greater expertise with cross-border cooperation than the Visegrad Four. As I have told the Slovak authorities, we are more than willing to share our experience.

Compared to its size, my country plays an important role in the European Union. We believe in Europe’s federal finality and the use of the communitarian method to reach that goal. We are honoured to host the European institutions in which some of our statesmen played, among others, a prominent role. How can a small country do that? It is part of our tradition: we are consensus makers, because Belgium enjoys a high European credibility while having only limited national interests.

TSS: Is Slovakia attractive for Belgian investors? Where do you see further potential?

We have been here from the beginning and have always believed that Slovakia belongs to the European family. Belgium established diplomatic relations with Slovakia the day your state was created and my first predecessor arrived in Bratislava in 1993. There are only about 400 Belgians living in Slovakia and about 200 of them are registered here.

We have bilateral trade at €800 million a year and trade is in equilibrium: we buy the same amount from you as we sell to you. We are selling cars; the Volvos that you see driving around are not only coming from Sweden. We sell you chemicals, metal products, foodstuffs and diamonds or chocolates for the ladies. Belgians have invested in limestone production near Košice. Bekaert, world-renowned for its steel cord products has recently expanded its plant near Sládkovičovo. Two banks operating in Slovakia, Dexia and ČSOB, have Belgian origins.

TSS: What do the two countries have in common? What are the potential cultural links between the two?

Slovakia and Belgium share many parallels: our countries have both lived under foreign domination for centuries. We both belonged, at different ends, to the Habsburg Empire. Language has played an important role in the creation of independent states. We are pleased today to share with Slovakia a European and an Atlantic dream. Both our countries have rich cultures and outstanding artists.

At a federal level, I can encourage some cultural initiatives but in our system cultural
competence lies within the regions. However, since I am here, I have already seen artists coming from all areas and all regions of Belgium. I saw Belgian artists at the circus festival Circul’art. As for classical arts, a Belgian group participated in the Košice Music Festival that was held in May, playing Sephardic Renaissance music. A Flemish group will also attend the International Theatre Festival in Nitra in September.