WHEN she came to Slovakia in 2005 Dutch photographer Illah van Oijen planned to stay only a couple of years. But now, in 2011, after publishing two collections of photographs as part of her Human Landscapes project, she is still hard at work here capturing the changing faces of Slovak cities and towns. While her first book, Bratislava - Mesto na mieru published in 2007 has been sold out for years, her latest effort, Košice – dzivosť v srdci published earlier this year, is very much available. 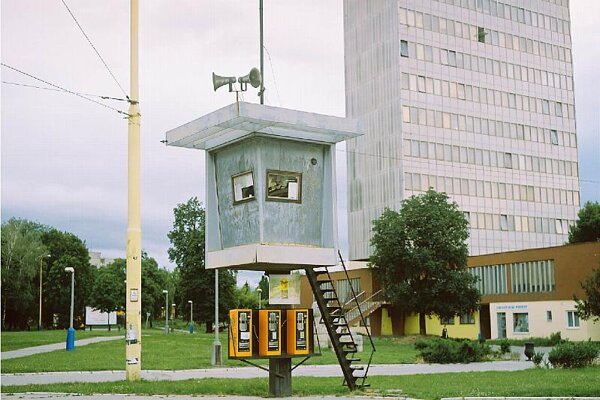 WHEN she came to Slovakia in 2005 Dutch photographer Illah van Oijen planned to stay only a couple of years. But now, in 2011, after publishing two collections of photographs as part of her Human Landscapes project, she is still hard at work here capturing the changing faces of Slovak cities and towns. While her first book, Bratislava - Mesto na mieru published in 2007 has been sold out for years, her latest effort, Košice – dzivosť v srdci published earlier this year, is very much available.

“When I finished the Bratislava book I immediately perceived from the reactions of people, who were surprised by my point of view, that this was something that was well-received,” van Oijen told The Slovak Spectator when explaining her decision to continue in mapping the landscapes of Slovak towns. “People invited me to their towns. First I intended to go to Žilina, but when Košice won the title ‘European Capital of Culture’ for 2013 I decided that because all my projects are about change that this might be an interesting time to go to Košice.”

She began the Košice project in 2008 spending two and half years on it but she soon realised that she would have to use a different approach in Košice than she did in Bratislava.

“All the time I was in Košice I lived with different people in different quarters of the city so I had a very different relationship to Košice than to Bratislava,” she explained. “In Bratislava I lived in one place and no matter where I went I would always come back to that home. In Košice I never came home. I was always going back and forth to various friends. So I know Košice quite well but only from the point of view of a visitor, a ‘Bratislavčanka’ from Netherlands who was photographing Košice. This really defines my Košice work.”

As in the Bratislava book, the book about Košice also contains written essays that explore the city from three different perspectives: Dutch writer Tijs van den Boomen reflects on the city’s urbanism, Agda Bavi Pain writes a micro history of one of the city’s streets and Gabriela Kisová looks at art in the public spaces of Košice. The latter two writers are Košice natives, but no longer live there.

The book about Košice is a continuation of van Oijen’s project Human Landscapes which concerns itself with the character of urban public spaces. Her concerns on this subject perhaps stem from lessons learned in her native country, the Netherlands. Because of the country’s high density population and long history of democracy the Netherlands has traditionally been known for its effective use of public spaces. This, coupled with van Oijen’s personal interest in architecture, is probably the key to her deep sensitivity to the manner in which public spaces are utilised in Slovakia.

And she believes that the people hold the power in their own hands to utilise public spaces to their best advantage.

“Public space belongs to citizens and unless they take action, nothing will change. The power is in people,” she said.

To encourage people to exercise their powers she helps to organise a street market to be held at Panenská Street in Bratislava on September 15, a project organised by the civic association OZ Punkt in cooperation with the council of the Staré Mesto district.

“Our goal is to demonstrate that streets are ours, that they belong to everybody,” she said. “Public spaces belong to the citizens. The taxes you pay are the taxes to care for them, to make sure that pavements are safe and well.”

Apart from co-organising the street market van Oijen is currently busy with preparing follow-ups of the Košice project in the form of discussions and exhibitions, but she has already started working on another project, this time about Žilina.

“For now I am going away but it does not mean that I’m leaving Bratislava forever,” she said. “My goal is to create a series of the human landscapes of Slovakia; to map and think about and look at how the public spaces are working in Slovakia. I started with Bratislava, then I worked on Košice and now I am moving to Žilina.”

But her plans stretch much further.

“My big dream is to have, once it is opened again, an exhibition about Human Landscapes of Slovakia in the Slovak National Gallery’s bridging exhibition space designed by Vladimír Dedeček,” she said, confirming her enthusiasm for Slovak Modernism architecture, which she perceives as deeply underappreciated by Slovaks. “That would be a dream come true, because it is such a beautiful exhibition space, with perfect light.”