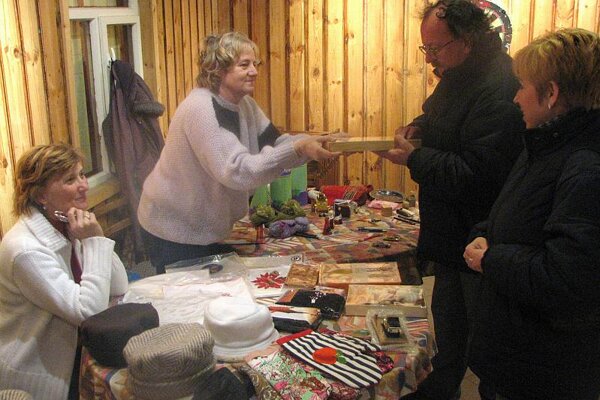 Bratislava
PHOTO-EXHIBITION: Miro Švolík – Veľká žena malý Muž / Big woman small man – This photo exhibition is only loosely inspired by his exhibiton last year. All cycles of this exhibition are, however, focused on the human body and its details.
Open: Tue-Sun 13:00 – 18:00 until September 4; Central-European House of Photography, Prepoštská 4. Admission: €3. Tel: 02/5441-8214; www. sedf.sk.

Senec
ROMA FEAST: Mini bašavel / Mini-Gypsy Feast – The multi-cultural festival has entered its second year, and after the young Roma talents go through a Summer Academy and prepare their programme, they will show their talent under leadership of Edy Portella, Laco Cmorej, Barborka Botošová and Ľuboš Gašpar, Naďa Uherová and Fero Balog, Alena Čermáková and Pavol Bodnár, Gabika Binderová and others; and it will also feature Bohémiens, performer Patrik Žigo and dance ensembles Stareet Elements, Dance Masacre, Merci, and others.
Starts: August 13, 15:00-late; Small Amphitheatre in Senec-Juh. Admission: €6-€8. Tel: 02/5244-4074; www.divemaky.sk.

Banská Štiavnica<
VESSELS: AT THE Počúvadlo Lake near Banská Štiavnica, a competition of bizarre vessels Utopenec (The Drowned) takes place on August 14 from 11:00. It includes races of unusual vessels (meaning anything that floats), water bicycles, a fashion show, water battles, a Dragon ship, and performances by Angelika4, Romano Ilo, Šukar dživipen, Everest, and others. For more info, please call 0910/958-867 or go to www.banskastiavnica.sk, or www.mladezbs.sk.

Betliar
MUSEUM/EXHIBITION: Porcelán aristokracie – China of the Aristocracy – One of the largest collections of Herend china to be seen outside its home country of Hungary shows not just cups and saucers, but also cutlery with china handles, inkpots, umbrella handles, playing cards, and many more artefacts of aristocratic life.
Open: Tue-Sun 9:30-17:30 until September 20; Múzeum Betliar, Kaštieľna 6. Admission: €4-€6. Tel: 058/7983-118; www.snm.sk.