AS EUROPEAN leaders search for ways to calm the edginess of global financial markets and tools to force irresponsible eurozone countries to observe stricter fiscal discipline, Slovak Prime Minister Iveta Radičová is seeking the support of parliamentary parties to back changes to the European Financial Stabilisation Facility (EFSF) agreed upon by European leaders, including herself, in July. Finance Minister Mikloš says that “the risk of recession is evident” adding that he believes the only chance to avert a recession is the rapid and efficient implementation of the measures agreed upon by European leaders. Yet instead of nearing consensus on how to address the debt crisis in Europe, Slovakia’s politicians have so far resorted to rancour and political manoeuvring. 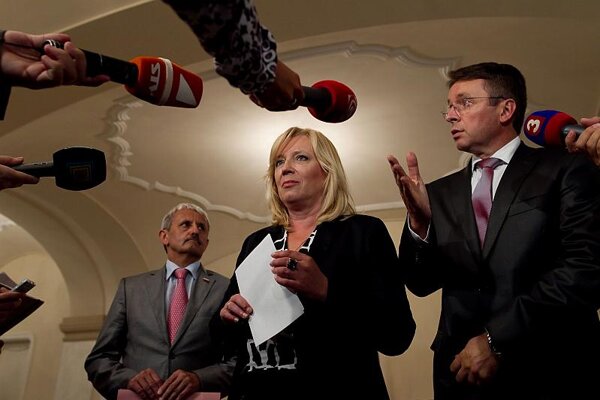 AS EUROPEAN leaders search for ways to calm the edginess of global financial markets and tools to force irresponsible eurozone countries to observe stricter fiscal discipline, Slovak Prime Minister Iveta Radičová is seeking the support of parliamentary parties to back changes to the European Financial Stabilisation Facility (EFSF) agreed upon by European leaders, including herself, in July. Finance Minister Mikloš says that “the risk of recession is evident” adding that he believes the only chance to avert a recession is the rapid and efficient implementation of the measures agreed upon by European leaders. Yet instead of nearing consensus on how to address the debt crisis in Europe, Slovakia’s politicians have so far resorted to rancour and political manoeuvring.

Slovak President Ivan Gašparovič says that such an important decision as Slovakia’s “yes” to an increase in the volume of the EFSF requires broad consensus across the political spectrum.

“Slovakia should remain in the position of a trustworthy and responsible member of the European Union,” Gašparovič said on August 16.

But the co-ruling Freedom and Solidarity (SaS) party has said that it is unlikely to support any changes to the EFSF. Party leader Richard Sulík called the EU’s proposals a road to socialism and the creation of a “debt union”. Changes in the rules of the EFSF and an increase in its size must be approved by the Slovak parliament, and the government may have difficulty finding enough votes without SaS.

Peter Zajac, the head of the Civic Conservative Party (OKS), which sits in parliament as part of the Most-Híd caucus, said that solving the debt problems of European public budgets by increasing them is dangerous, and that his party regards balanced budgets by eurozone member countries and cuts to public spending as the only realistic ways to prevent further economic crisis and recession.

The approach of Smer, the largest opposition party has been ambiguous. While its leader Robert Fico, has on several occasions declared that he supports the changes agreed upon in Brussels, as of August 18 he had not confirmed whether his 60-plus block of MPs – who rarely, if ever, defy his orders – would back the changes to the EFSF in a vote in parliament.

After a meeting with Radičová on August 16, Fico said that the ruling coalition must first be unanimous in its support for the changes.

“Do not be counting votes all the time; where do we want to have Slovakia – this is how the question needs to be posed,” Fico said, as quoted by the SITA newswire, adding that there is nothing to discuss with the prime minister because she herself does not know what kind of support she can expect from her ruling coalition partners. “Iveta Radičová is unable to secure anything.”

Fico then suggested that he himself would initiate talks with the ruling coalition parties. Yet none of the four parties had agreed to meet Fico as of August 18. The leader of the Christian Democratic Movement (KDH) parliamentary caucus, Pavol Hrušovský, said that it is the prime minister’s role, not Fico’s, to summon round tables.

Chief analyst with Volksbank Slovensko Vladimír Vaňo suggested that the inability to hammer out an agreement on such a crucial issue – one which the prime minister has already signed up to at an EU summit – could imply significant difficulties in pushing through inevitable fiscal consolidation measures over the next few years.

“That could harm [Slovakia’s] credit rating, increase interest rates for public as well as interconnected private borrowing, and undermine the confidence of foreign investors with all the consequences for the strength of the economy and labour market conditions,” Vaňo told The Slovak Spectator.

Referring to the possible consequences if Slovakia ultimately refused to support changes to the EFSF, Juraj Karpiš, an analyst with the Institute of Economic and Social Studies INESS, said that representatives of the eurozone would have to return to the negotiating table and find a new solution which would not include the use of Slovak public finances.

According to Vaňo, the unanimous nature of the agreement reached at the EU summit in July speaks volumes about the crucial importance of these measures for the future of European monetary union.

“Given the extent of the agreement across all of the participating governments, there is no room to think that there is any comparable, viable alternative that would gain unanimous support,” Vaňo said. “Most importantly, one should keep in mind that eurozone leaders are responding to threats from the financial markets in an environment where time is money. Even more importantly, the ability to act in a timely and decisive manner is crucial to maintaining credibility.”

Vaňo said that given the more than fragile nature of the economic recovery, hesitancy in adopting necessary and inevitable measures could further undermine business and investor confidence in the European economy and would subsequently result in bigger pain both in the real economy as well as the labour market. He also said that there is no such thing as ‘Slovak’ opposition to the conclusions of the EU summit, which were jointly agreed and duly signed up to by the prime minister of the Slovak Republic.

“Of all the relevant political forces on the Slovak political scene, stubborn threats to block this agreement are coming only from a junior coalition party that was created just shortly before the last election and played a populist anti-Greek card in its pre-election campaign,” Vaňo said. “Threats to block the conclusions of the EU summit are hence chiefly motivated by the effort to retain populist-driven public support in the face of eroding support in opinion polls.”

Karpiš said it is difficult to speculate about the consequences that a rejection of the changes to the EFSF would have for Slovakia.

“It would probably not please other countries,” Karpiš told The Slovak Spectator. “It would be a fundamental signal that could motivate other countries to withdraw from such an approach to ‘solving’ the European debt crisis, which over the past year has not worked very effectively”.

According to Vaňo, the worst-case scenario associated with letting the situation evolve unchecked would bring with it the risk of a more pronounced recession and the weakening of the credibility of euro.

“Deeper recession would inflict not only untold pain through an increase in unemployment, it would also undermine budget revenues and push expenditure and, more importantly, deficits higher,” Vaňo said. “In the current situation, this would significantly exacerbate the sovereign debt crisis in the eurozone, and would put both credit ratings as well as interest rate expenses under unfavourable pressure.”

As for other solutions, Karpiš suggested that representatives of the eurozone should implement a plan of radical restructuring of unsustainable debt, with subsequent liquidation and in some cases nationalisation of insolvent financial institutions.

“The existing EFSF and the European Central Bank could be used to support the banking system in the eurozone during the critical transition period, without financing or even further inflating the already unsustainable debts in peripheral countries,” Karpiš said.

According to Karpiš, Slovakia has the right to refuse to participate in what he called “this mistaken approach to the debt crisis within the eurozone”. The potential costs for Slovak taxpayers are immense, he added.

“This is why the country should use this right, especially if there are alternatives which have better potential to solve the debt crisis,” Karpiš said.

Karpiš suggested that transferring the debts of problem countries to Slovakia and other members of the eurozone represents “an unjust transfer of wealth, which moreover worsens fiscal discipline in the eurozone and thus only deepens the existing problems”.

“Nobody claims that the conclusions of the EU summit are a panacea for the difficult situation,” Vaňo told The Slovak Spectator. “They prevent the worst-case scenario and provide at least the minimum necessary stability and predictability for future development that is needed by the private sector in order to avoid undermining economic activity.”

For Vaňo the most important fact is that the conclusions of the EU summit, unanimously agreed by the participating leaders of member states, are of paramount importance to avoid the situation being further aggravated, or even getting out of control.

“The measures agreed at the EU summit are a crucial back-stop against further aggravation of the tense situation in the financial markets, which have a natural tendency to hunt not only for success, but also for failure. When this tendency becomes uncritically prevalent, it has the potential to become a self-fulfilling exaggeration which then creates temporary misallocations and overshooting in market prices,” Vaňo said. “Given this natural shark-like tendency of market to smell for blood or any sign of weakness or discrepancy that might open the first hole in the dam that would subsequently attract all the pressure of the remaining water, the conclusions of the EU summit are intended to demonstrate the necessary unity and unanimous integrity of the membership chain, which is not as strong as its weakest link but which acts on the principle of one for all, all for one.”

The natural tendency of the market is to run with the winners and bring down the losers, Vaňo said, adding that the markets are presumptuous and unforgiving; they always try to run “ahead of the curve”, to anticipate what is coming, even though they might be proven wrong later – which is the reason for wide and frequent swings in market prices.

“That’s the name of the game,” said Vaňo, adding that the purpose of the measures agreed at the EU summit is to prove markets wrong in their malicious testing of some of the weak links.