In Slovakia’s highest mountain ranges, like the Tatras, food and fuel supplies for the most inaccessible hikers’ huts are still delivered by humans. Apart from being cheap, and often the only solution for supplying the chalets (in the Alps, supplies are flown in by helicopter or delivered by cable-car; in the Pyrenees donkeys are used), it can also be fun. 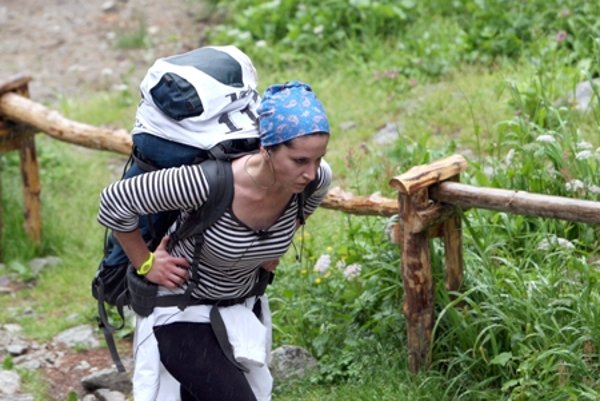 In Slovakia’s highest mountain ranges, like the Tatras, food and fuel supplies for the most inaccessible hikers’ huts are still delivered by humans. Apart from being cheap, and often the only solution for supplying the chalets (in the Alps, supplies are flown in by helicopter or delivered by cable-car; in the Pyrenees donkeys are used), it can also be fun.

This is particularly true at events like the national competition of Slovak sherpas that took place in mid June. Dozens of participants gathered on Saturday at the Sorea Hotel in Hrebienok, and from there, climbed with loads that weighed tens of kilograms, to the Zamkovský Hut, an altitude difference of 190 metres. The official name of this competition is the Juraj Petranský Memorial / Nosičská stovka (Sherpas’ Hundred) and commemorates a 26-year-old Slovak sherpa who died in an avalanche 11 years ago while carrying supplies to the famous Téry Hut. (There is another similar competition, which is older and more traditional, called the Sherpa Rallye.) Many of the sherpas are students. Some do the job only during the summer holidays, while others do it all year round, several times a week. Loads can weigh between 50 and 90 kilograms, depending on the sex, age, size and fitness of the “mountain bearer”.

Peter Petras, one of the competitors, told the Sme daily that since he began carrying supplies to mountains huts 50 years ago things have changed significantly. Many items, such as construction materials, can now be flown in by helicopter. But the fact is that perishable food still has to be carried in on sherpas’ backs. Petras says that the age limit for sherpas has increased, thanks to him, to nearly 70. Bank employee Martina Cigánková from the Czech Republic said that, for her, doing the Sherpa job is just a leisure activity, like cycling.

Women carry a 25-kilogram load twice, making 50 kilograms altogether. Men can compete in the same category, carrying 50 kilograms twice, or in the single-trip 100-kilogram category. On average, it takes sherpas close to an hour to complete the route. Insiders reveal that apart from the landscape and the weather – which can sometimes be critical – it is also very important to have a good frame for carrying goods, and to balance the load carefully. In some cases, knowing short-cuts and their condition can be a big advantage as well. The keeper of the Zamkovský Hut, Jana Kalinčíková, told Sme that Slovakia is one of the last countries in Europe still to use sherpas. “The reason is simple. There are very few cableways, and helicopters are not used for this purpose, either,” she said. During the summer season, 15 to 20 tonnes of goods must be delivered to her chalet every month. Some sherpas make as many as three return trips a day, and also carry litter back down in order to dispose of it in the municipalities at the foot of the mountains.