ALTHOUGH there are about 400 German companies providing as many as 90,000 jobs in Slovakia, English is still the clear leader among foreign languages taught in local schools. However, Slovak students are still interested in studying German – the language is, after all, spoken in several nearby countries. 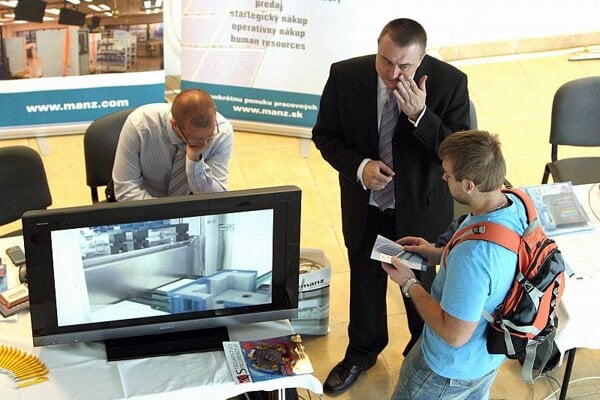 ALTHOUGH there are about 400 German companies providing as many as 90,000 jobs in Slovakia, English is still the clear leader among foreign languages taught in local schools. However, Slovak students are still interested in studying German – the language is, after all, spoken in several nearby countries.

Each year, up to 150 Slovak students apply for scholarships offered by the German Academic Exchange Service (DAAD), and many others apply to attend German universities through the Erasmus programme, in order to spend time studying in Germany, improve their language skills, and get to know German culture.

“Historically German has played a very important role in Slovakia and has been spoken here for around 800 years,” Roland Westebbe from the press department of the German Embassy in Bratislava told The Slovak Spectator, adding that the large number of German companies and the number of people they employ here indicates how valuable the language is.

In 1997, Germany and Slovakia signed a treaty on cultural cooperation which allowed for the academic exchange of students. This cooperation deepened after Slovakia joined the European Union in 2004.

“For more than 50 years the University of Economics in Bratislava and the Martin Luther University in Halle have been working together closely and successfully in the area of academic exchange,” says Westebbe. “The mutual cooperation was extended in 2005 when they launched a combined master’s study programme in International Financial Management.”

Westebbe adds that several factors influence the attractiveness of student mobility. Though the number of Slovak students travelling to Germany is high, it has decreased over the last few years.

“Recent studies by DAAD indicate that the Bologna reforms [which sought to standardise higher education qualifications by implementing a system of credits for attendance on specific courses] have had a negative effect on the mobility of students,” he told The Slovak Spectator, adding that the reform limited flexibility in both bachelor's and master's study programmes.

Another negative factor influencing mobility is the overall economic situation, which according to Westebbe has certainly had an impact on the willingness of students to enhance their skills by studying abroad.

At the moment, the trend at Slovak schools is towards wider teaching of English. Though Westebbe says that the German Embassy supports the improvement of English-language skills, he emphasises that schools should not undermine the importance of learning a second foreign language.

“In our modern and globalised world a profound knowledge of English is today almost indispensable,” Westebbe said. “On the other hand, as English is a must in today’s world, it is also no longer a competitive advantage for young people seeking qualified employment. A working knowledge of at least a second foreign language should thus be the goal.” For that reason the German embassy and its partner organisations intend to closely monitor the further development of language education in Slovak primary and schools.

“We hope that despite the legal changes German will continue to be taught in Slovak schools to a similar extent as before,” Westebbe said.