WHILE Europe hopes that the prospect of a double-dip recession will remain only a subject of economic discourse and not a reality, economic analysts and state institutions in Slovakia have taken off their rose-tinted glasses and taken a fresh look at the forecast growth of the Slovak economy during the remainder of 2011 and in 2012. 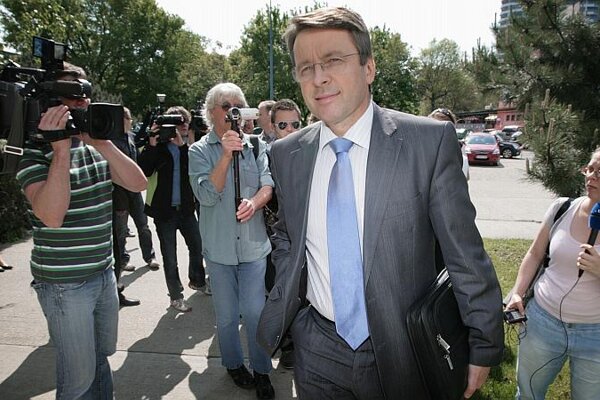 WHILE Europe hopes that the prospect of a double-dip recession will remain only a subject of economic discourse and not a reality, economic analysts and state institutions in Slovakia have taken off their rose-tinted glasses and taken a fresh look at the forecast growth of the Slovak economy during the remainder of 2011 and in 2012.

In its recent flash estimate, the Finance Ministry’s Institute of Financial Policy (IFP) reported that it expects the Slovak economy to grow at a slower pace than it had earlier forecast, trimming its prognosis for annual growth in 2012 from 4.4 percent to 3.4 percent.

The IFP said that uncertainties in global financial markets and a cooling of the economies of Slovakia’s largest trading partners had prompted to cut its macro-economic prognosis.

Market watchers agreed with that assessment, suggesting that the ministry’s earlier forecast was much too optimistic. Some analysts have chosen to see things even more pessimistically when releasing their forecasts for Slovakia’s economic growth next year.

“We think the IFP prognosis is still slightly optimistic,” Vladimír Zlacký, chief economist with UniCredit Bank, told The Slovak Spectator, adding that his bank expects the Slovak economy to grow by only 2.8 percent in 2012, with additional downside risks possible.

On August 29 the International Monetary Fund released even gloomier assessments of economic growth in the eurozone for the remaining months of the year, trimming its previous prediction of 2-percent annual growth in 2011 to 1.9-percent. But Standard & Poor's, an international rating agency suggested on August 30 that Europe should be able to escape a double-dip recession despite the significant slowdown in second-quarter GDP growth in most European countries.

Slovakia’s banks have been more aggressive in lowering their predictions for next year’s economic growth than the IFP. Based on a regular survey of banks conducted by Slovakia’s central bank in August, the consensus of the banking houses is for growth of 3.1 percent for all of 2011, lower by 0.5 percentage points than their July assessment.

The bankers scaled down even further their forecasts for economic growth in 2012: in July they predicted annual growth of 4.3 percent while in August they slashed that prediction to only 2.9 percent, SITA reported.

The slower rate of economic growth is expected to affect Slovakia’s public finances.

A €202-million shortfall in state revenues in 2012 is expected because of lower economic growth, the IFP said in its August 26 release. The institute added that it expects government expenditures to remain unchanged in 2012, predicting that interest rates will fall, saving the government money on interest payments that would counteract higher spending on unemployment benefits.

Eva Sadovská, an analyst with Poštová Banka, told The Slovak Spectator that a slowdown in economic growth directly influences the public budget because slower growth has negative impacts on employment levels, personal consumption and investment, leading to less revenue flowing to the state from various taxes.

“The further consolidation of public finances or maintaining the planned lower [state budget] deficit could happen through measures that will either increase budgetary revenue or cut spending, or by a combination of these two,” Sadovská stated.

Fico: Tax banks and the rich

Robert Fico, leader of the opposition Smer party, proposed that banks, corporations and the rich be taxed to plug holes in the state budget. Fico also argued that the government will need to revamp its draft state budget for 2012.

The spokesman for the Finance Ministry, Martin Jaroš, responded that the ministry had prepared the draft state budget by August 15, as prescribed by law, and had taken into account the most recent economic developments and had consulted with independent experts. Nevertheless, he added that Finance Ministry State Secretary Vladimír Tvaroška is holding discussions with experts every day that are marked by an expectation of lower state revenue, the TASR newswire wrote.

Effects on the state budget

The Finance Ministry had originally pitched its draft state budget as a roadmap for fiscal consolidation, laying out a budget deficit of €3.172 billion for 2012, €637.6 million lower than the deficit approved for this year. If these numbers hold, the public budget deficit in 2012 will fall to 3.8 percent of gross domestic product. The target for 2013 is to bring the deficit under the 3-percent limit set by the Maastricht Treaty for countries in the eurozone. The public finance deficit for this year is predicted to reach 4.9 percent of GDP, according to the ministry.

“The economic outlook has significantly worsened within a short period and it is good if politicians, during the debate on next year’s budget, have some vision about what it could mean for the revenue side of the budget,” Eduard Hagara, senior research analyst with ING Bank, told The Slovak Spectator, adding that his bank had lowered its forecast for GDP growth in 2012 from 4.5 percent to 3.5 percent.

Hagara added that since uncertainty prevails at this time it would be prudent for the government to remain cautious and not reach immediately for budgetary reserves, expressing his opinion that this would be premature. “It would be best to respond to lower revenue in the budget with lower expenditures,” Hagara said.

Zlacký agreed that the main risk to the draft state budget for next year is lower than expected economic growth, which could lead to lower state revenue and higher expenditures than proposed in the budget.

“In case of panic in the financial markets, interest-servicing costs for government debt might grow,” Zlacký said. “On the other hand, we appreciate that the cabinet is striving for fiscal consolidation and reforms in the labour market and the business environment that should gradually lead to lower risk premiums for Slovak debt and in the future slightly ease the expenditure side of the budget under the condition of normal developments in the financial markets.”

The IFP also unveiled two crisis scenarios in the event of a significant economic freefall. The first scenario assumes a full-blown European sovereign debt crisis that IFP said would add pressure of €86 million on Slovakia’s public finances in 2012 and more pressure in forthcoming years. The second scenario, even more negative, assumes a global economic crisis, including a bursting bubble in Asia and a political stalemate in the United States that would create pressure on Slovakia’s public finances of an additional €116 million in 2012 and €315 million in 2013, according to the IFP release.

The IFP outlined several possible measures to soften the impact of crises such as these on public finances, including an improvement in the effectiveness of state-run businesses, scrapping the country’s construction-savings subsidies, modifying social benefits and downsizing the civil service. On the revenue side, the IFP outlined possible tax measures such as abolishing the reduced-rate VAT of 10 percent on certain goods, increasing the basic VAT rate from 20 to 21 percent, raising taxes on real estate by 50 percent, scrapping all relief programmes on energy taxes and increasing the excise tax on alcohol.

Who should pay higher taxes?

Sadovská of Poštová Banka suggested that tax hikes are an unpopular approach because taxpayers have certain expectations regarding their levels of taxation, adding that with noticeable quality problems in the health-care and education sectors and the revelations of overpriced government tenders citizens’ resistance to higher taxes could harden.

Regarding a higher VAT rate to increase state revenue, Zlacký of UniCredit bank said that this approach would further reduce already weak household consumption and result in even lower economic growth.

“We would instead welcome higher taxes on alcoholic beverages, tobacco products and other hazards, as well as a considerably higher tax on real estate, which is relatively low in Slovakia,” Zlacký stated.

Fico announced that Smer will soon table proposals for imposing higher taxes on banks and what he called monopoly enterprises as well as on higher-income individuals. Zlacký was negative about the idea of higher taxes on banks, suggesting that this would be a negative signal to investors.

“It is interesting that Robert Fico comes up with such proposals whenever his party is not in government,” stated Jaroš of the Finance Ministry, as quoted by SITA, in response to Fico’s proposals. “The question is why they did not have that courage while in government.”

Fico also stated that Smer rejects the philosophy that revenue shortfalls in the state budget should be dealt with by taxing the incomes of Slovakia’s poorest citizens.

Jaroš responded to that point by saying that Smer does not need to be concerned about the progressive nature of the current tax system because it had been made more progressive in 2004 through the establishment of deductible amounts and other relief for citizens with lower incomes.

“Thanks to this, the poorest do not pay any tax, or the state is even paying them, while the better earners are not motivated to avoid their taxation duties,” Jaroš stated, adding that even Smer while in power did not change this aspect of Slovakia’s social system.