THE CABINET of Iveta Radičová on August 21 agreed the changes that it wants to make from next year to the way Slovakia calculates mandatory payroll levies, and will now take them to parliament. But the reactions so far from associations representing self-employed people and artists – and even from some MPs within the parties of the ruling coalition – suggest that the cabinet's proposed bill will face a rough ride. 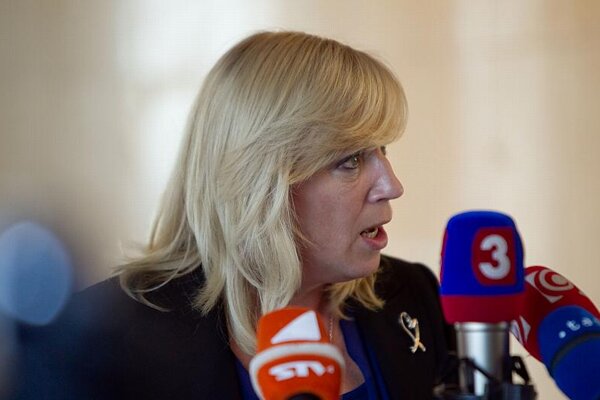 THE CABINET of Iveta Radičová on August 21 agreed the changes that it wants to make from next year to the way Slovakia calculates mandatory payroll levies, and will now take them to parliament. But the reactions so far from associations representing self-employed people and artists – and even from some MPs within the parties of the ruling coalition – suggest that the cabinet's proposed bill will face a rough ride.

The government has pitched its proposals as a reform that will develop a unified system for collection of income taxes, customs duties and mandatory payroll levies and that it will ease the administrative burden on employers as well as employees. This aspect of the proposal nearly everyone seems to support – but self-employed people are protesting that the changes as currently laid out will result in them having to shoulder a much heavier burden through higher income taxes and levies.

Representatives of the Slovak Association of Small Enterprises, joined by Slovenský Živnostenský Zväz (SŽZ) and Slovenská Živnostenská Komora (SŽK), representing self-employed trade and craft workers, and the Slovak Coalition for Cultural Diversity, a group representing artists, delivered a statement to Prime Minister Radičová at the end of August with their position on the cabinet proposal. The slogan crafted by the four groups was: “We want to live and survive”. Radičová promised the representatives of the groups that leaders of the ruling coalition would review their position and comments.

The government also approved the concept of a so-called ‘super-gross salary’ on August 19 that would increase the nominal gross salaries of employees so that they reflect the amount of payroll-based mandatory payments that employers make, principally for mandatory social insurance and health insurance, on behalf of their employees. The introduction of this super-gross salary concept is not supposed to result in employers making higher mandatory payments for these programmes, the TASR newswire reported.

Under the cabinet-approved proposal, three rates for calculating payroll levies for social insurance programmes will be established, depending on an employee’s salary level and type of employment contract. The highest, 19-percent rate will apply to employees who receive a regular monthly salary: these employees will continue to be entitled to sickness and unemployment benefits. Employees with irregular income or dividend income and those who are self-employed will pay social insurance contributions at a 13-percent rate and those employed on limited work agreements (“na dohodu” in Slovak) will contribute at a rate of 10 percent, TASR wrote.

The payment for mandatory health insurance would be set at 9 percent for all employees except those with serious health impairment or those receiving a disability pension, who would pay half of the fixed rate (4.5 percent).

The cabinet proposal would also abolish the 40-percent lump-sum allowance that self-employed taxpayers can deduct from their gross income, substituting instead a maximum monthly allowance of €200, a figure linked to Slovakia’s official subsistence level.

“The parameters are set in such a way that the majority of employees will have a slightly higher net income,” stated Labour Minister Jozef Mihál, as quoted by the SITA newswire. The minister added that the removal of exemptions on payment of payroll levies would give the system “greater justice”.

The representatives of the artists and the self-employed argue that the 40-percent lump-sum tax allowance for self-employed individuals should be preserved and that their payment rate for social insurance should be set at 9 percent of income.

The Civil Conservative Party (OKS), which won four seats in parliament on the slate of the Most-Híd party, a member of the governing coalition, has been critical of the proposed measures, saying that they will raise the tax burden on self-employed individuals.

The chairman of OKS, Peter Zajac, said in late August that the current economic situation in Slovakia is different from just a few months ago.

“Everybody had expected high GDP growth,” Zajac stated, as quoted by TASR. “It has become evident of late that it is small and medium-sized entrepreneurs who generate jobs and financial resources.”

Finance Minister Ivan Mikloš stated on August 21 that he does not know any alternative to the cabinet’s reform bill and that the legislation emerging from parliament must not undermine the state budget or preserve “unsystematic elements in the system”, as reported by SITA.

Stanislav Čižmárik, president of SŽZ, suggested that cancellation of the lump-sum tax allowance could contribute to the development of a grey economy in Slovakia and serve as an incentive for individuals not to declare their real income.

Finance Ministry spokesman Martin Jaroš told public-service broadcaster Slovak Radio that the ministry does not share this concern, saying “people who have actual expenses that are higher than €200 monthly can deduct them from their tax base and this is nothing demanding and they do not even have to keep an accounting, only a simple registry of income and expenses. The ministry admits that the cancellation of the lump-sum [allowance] might negatively affect high-earning people with no real expenses that they could deduct”.

László Solymos, Most-Híd’s parliamentary caucus leader, told TASR on August 30, that what he termed ‘freelancers’ should be covered by different conditions in the proposed tax-levy reform than those that will apply to other self-employed people, adding that his party will propose adjustments in parliament to this part of the cabinet bill’s draft language.

The caucus leader said Most-Híd is of the opinion that freelancers should not be deprived of their right to deduct a lump sum of 40 percent of their income from their tax base and that they should not pay any levies on their royalties.

The prime minister’s spokesman, Rado Baťo, told the media that the government is seeking a payroll-levy reform solution that causes no damage to the labour market or employment while making sure that the level of payroll levies secures a high enough old-age pension so that retirees are not dependent on the country’s social system.