Tying up the loose ends of coupon privatisation

MANY Slovaks have already forgotten their participation in the country’s coupon privatisation of the early 1990s. Only after issuing their annual money order to pay administrative fees for the securities they received at that time are they reminded that they own ‘something, somewhere’. But after realising that they may be holding nothing more than a continuing obligation to pay hefty annual administrative fees, many Slovaks have sought to rid themselves of these securities – and found that many of them no longer had any actual value or that no one was interested in purchasing them. 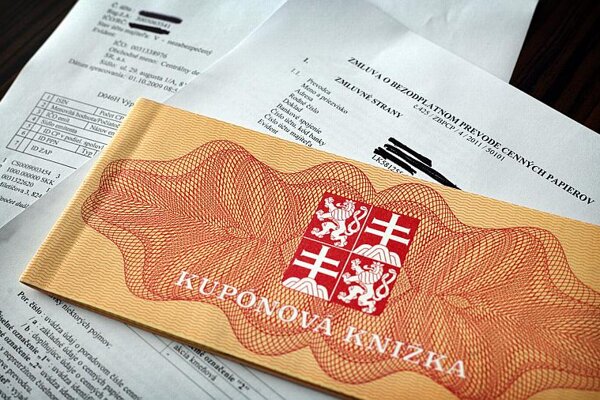 MANY Slovaks have already forgotten their participation in the country’s coupon privatisation of the early 1990s. Only after issuing their annual money order to pay administrative fees for the securities they received at that time are they reminded that they own ‘something, somewhere’. But after realising that they may be holding nothing more than a continuing obligation to pay hefty annual administrative fees, many Slovaks have sought to rid themselves of these securities – and found that many of them no longer had any actual value or that no one was interested in purchasing them.

To assist people in ending their continued ownership of valueless coupon privatisation securities, Slovakia enacted legislation to allow the free transfer of unwanted securities to the country’s National Property Fund (FNM). However, nobody expected that this state body – which had the primary task of transferring state-owned assets into private hands after the fall of the communist regime – would have valuable securities transferred back to it. But that is what has happened and the FNM does not know what it will do with either the valuable shares or those that are actually worthless.

“The fee is calculated as 0.055 percent of the nominal value of the securities held on the account of their owner,” stated Rastislav Pavlík, the CDCP director general, as quoted by the Pravda daily. He added that the administrative fee is calculated on the basis of the price when the securities were issued even if some of the companies are now bankrupt and the shares are currently worthless. “Only owners of accounts with securities with a nominal value of up to €35 or empty accounts will be exempt from payment of the fees,” Pavlík said.

When a person holding securities received through coupon privatisation decides to transfer them to the FNM, that agency will pay the transfer fee as well as the fees for administering the securities for the year during which the securities were transferred and for the two previous years.

Miloslav Homola from FNM told The Slovak Spectator that by June 30, 2011 almost 238,000 people had enquired how they could transfer their securities without charge and over 127,000 of them had actually signed an agreement transferring their securities to the FNM free-of-charge.

However, by using this process some people have also inadvertently transferred valuable securities to the FNM, apparently believing their shares had no value. Up to the end of 2010 the FNM had received marketable shares in the Slovnaft oil refinery as well as shares in profitable banks such as VÚB, UniCredit Bank Slovakia, OTP Banka Slovensko, Tatra Banka, insurer Allianz-Slovenská Poisťovňa, and companies such as Zentiva and Biotika. The SITA newswire reported in January this year that someone had transferred three shares in Tatra Banka that had a market value of about €36,000 to the FNM.

Individuals who still hold securities from the coupon privatisation scheme must carefully research whether their shares have any current value before making any transfers to the FNM – because it is not possible to reverse such a transfer.

The FNM has stated that it is the responsibility of the person holding shares to assess whether they have any value and that after the securities are transferred to the FNM the previous owner cannot reverse the transaction. Homola stressed to SITA in January that, based on current legislation, the FNM is required to accept any and all securities that a shareholder decides to transfer.

The FNM regularly prepares statistics about securities it has obtained based on various criteria, but primarily about the condition of the company and the value of the shares, Homola told The Slovak Spectator. An upcoming valuation of the securities held by the FNM will be prepared as of December 31, 2011 and results should be released in January 2012.

“The capital market department of the FNM is monitoring the status of such obtained securities,” Homola told The Slovak Spectator. “The FNM has already initiated a change in the law to set a deadline for transfer of securities. It proposes December 31, 2012. The reason is the need for follow-through, effective handling of securities obtained in this way. The FNM Executive Committee will decide what to do with the securities after the FNM Supervisory Board negotiates the matter.”

After the fall of the communist regime in 1989, Slovak citizens had an opportunity to acquire a portion of the wealth they had helped to create during the totalitarian regime through a coupon privatisation scheme that enabled them to obtain shares in some of the flagship companies in the state-owned economy. Along with the possibility of direct purchase of companies, citizens were offered participation in two waves of coupon privatisation but only the first wave, which started in 1991, was completed and led to citizens actually receiving securities.

The stated goal of coupon privatisation was the speedy transformation of state-owned companies into joint-stock companies. The core idea was to transfer shares of companies in exchange for investment coupons rather than for cash. Each citizen aged 18 or older had the right to obtain for 1,000 Czecho-Slovak crowns (Kčs) one coupon book containing coupons with 1,000 investment points. In total, 8.5 million citizens of the Czecho-Slovak Republic joined the scheme, of whom 2.5 million were Slovaks. Shares in 1,492 companies with a nominal aggregate value of Kčs 300 billion were offered and these included 504 Slovak companies with a nominal aggregate value of Kčs 80 billion. Those holding coupon books invested 28 percent of all their points directly into certain companies while the remaining 72 percent of the points went to so-called investment privatisation funds, according to a summary review prepared by the Trend economic weekly in 2006.

There are differing opinions on whether the Czecho-Slovak coupon privatisation programme was successful or not. Some analysts view it as an exceptionally swift transfer of state-owned firms into private hands while others call it the fraud of the century. Some have argued that it was a mistake to include certain companies that were essentially weak because they did not have forward-looking production plans or had lost their markets in the former Eastern Bloc in the coupon privatisation.

As well, there was limited experience with analysing the value of company shares and Slovakia lacked effective legal rules governing the capital market, enabling individuals to ‘tunnel out’ assets from some of the investment privatisation funds. Consequently, some individuals who had invested their coupon points with investment privatisation funds ended up holding worthless shares. This may have contributed to some people’s opinion, particularly those with limited knowledge about the stock market, that all securities acquired during coupon privatisation have little or no value, leading them to transfer shares to the FNM that do have a current marketable value.