SLOVAKS at first greeted news that one of the nation’s top ice hockey players had been killed in a Russian plane crash with disbelief. But incredulous readers’ comments under the first reports on Slovak news websites about the tragedy were soon overtaken by massive media coverage, shock, grief and even tears, once reports of the death of the Slovak national hockey team’s ex-captain, Pavol Demitra, were confirmed. 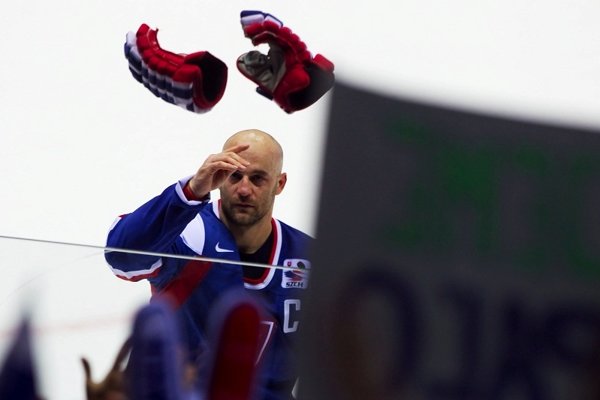 SLOVAKS at first greeted news that one of the nation’s top ice hockey players had been killed in a Russian plane crash with disbelief. But incredulous readers’ comments under the first reports on Slovak news websites about the tragedy were soon overtaken by massive media coverage, shock, grief and even tears, once reports of the death of the Slovak national hockey team’s ex-captain, Pavol Demitra, were confirmed.

At least 43 people, including almost the entire Lokomotiv Yaroslavl ice hockey team, died when their Yak-42 passenger plane crashed shortly after take-off near the city of Yaroslavl in central Russia on September 7, 2011. The plane was heading for Minsk, Belarus, for their first match of the new season of the Kontinental Hockey League (KHL), the world’s top professional hockey league outside the North American NHL. Besides the many Russians killed in the tragedy, several foreigners were aboard the plane too, including the Canadian coach of Lokomotiv, and players from Germany, Latvia, Sweden, Belarus, three players from the Czech Republic, and Demitra.

“I have lost all my friends,” the new coach of the Slovak national team, Czech Vladimír Javurek, who until recently coached Lokomotiv Yaroslavl, told the Sme daily in the aftermath of the tragedy.

In Slovakia, life for many people stopped for the rest of their day after the news arrived from Russia. Political leaders refused to comment on any current issues, instead expressing their sympathy for the family of the late Demitra.

Demitra, aged 36, was drafted into the NHL in 1993 and started his career with the Ottawa Senators, but his real breakthrough came with a move to the St. Louis Blues in 1996, where he grew to become a star. He spent 16 seasons overseas, scoring 304 goals in the NHL and assisting in another 464. Demitra also played in the colours of Los Angeles, Minnesota, and Vancouver.

Slovaks especially valued his appearances in the national ice hockey team. Demitra represented Slovakia at six world championships and three Olympic tournaments. He was a member of the team that won the bronze medal at the World Championship in 2003.

Hockey experts called Demitra one of the best players in the world and a natural talent ahead of his time. They noted in particular his gentlemanly conduct on the ice, for which he also received the Lady Byng Memorial Trophy in 2000. Slovak hockey experts and enthusiasts alike referred to him as a legend of Slovak ice hockey.

Demitra was also perceived as such by fans, who created an unprecedented atmosphere for him in May this year in Bratislava, after his last match for the national team, against Denmark at the 2011 Ice Hockey World Championship, the first world championship to be held in independent Slovakia. Despite the disappointing performance of the Slovak team, the fans applauded and chanted their thanks to Demitra, the outgoing team captain, and he left the stadium with tears in his eyes. “It’s been a pleasure playing for Slovakia all these years,” he said after his farewell to the national team.

The 2011/12 KHL season that Lokomotiv Yaroslavl was about to launch in Minsk in early September was supposed to be Demitra’s last at the top level. He announced that he was happy playing in Russia, but after this season he was planning to return to Slovakia and devote his time to his wife and two children, and to nurturing young hockey talent in Trenčín, where he had first started playing.

In the aftermath of the tragedy, the future in the KHL of Lokomotiv Yaroslavl, who were Russian Champions in 1997, 2002 and 2003, was put in doubt. The team had been due to play Dinamo Minsk on Thursday, September 8.

The heads of the KHL held an urgent meeting to discuss the measures to be taken following the crash. The match between Salavat Yulaev Ufa and Atlant (a team from Moscow Region), which was to have been the KHL season opener, was cancelled, the Russia Today news portal reported.

Meanwhile, the Russian media reported that all 43 bodies had been recovered, of which 14 – seven of them reportedly foreign citizens – had been identified as The Slovak Spectator went to print the day after the tragedy. Only two people, one player and one crew member, survived the tragedy, but with severe injuries.

A day after the crash its cause remained unexplained. Russia’s Investigative Committee has launched a criminal investigation into the incident, as has the Interstate Aviation Committee, Russia Today reported.

“Investigators have only just begun collecting evidence and data from the fatal Yak-42 plane crash,” Russia Today wrote. “All possible causes for the tragedy are being considered – but sources within the investigative teams say the main focus is on technical failure and human error.”