FOR OPPOSITION leader Robert Fico of the Smer party, a contract signed in August to lease space for tax offices in Košice is sufficient reason to initiate a motion of no-confidence in Prime Minister Iveta Radičová. She has responded that the controversy is absurd and she considers the issue closed. Radičová even tossed the matter back to Smer, suggesting if it was a scandal involving party cronyism, it was one that began under the previous Fico government. 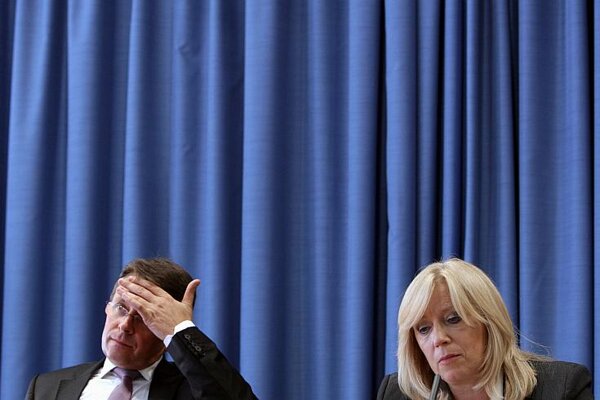 FOR OPPOSITION leader Robert Fico of the Smer party, a contract signed in August to lease space for tax offices in Košice is sufficient reason to initiate a motion of no-confidence in Prime Minister Iveta Radičová. She has responded that the controversy is absurd and she considers the issue closed. Radičová even tossed the matter back to Smer, suggesting if it was a scandal involving party cronyism, it was one that began under the previous Fico government.

“For me, it is a closed issue,” Radičová said, while restating the stance presented earlier by Finance Minister Ivan Mikloš that the rental agreement signed by Slovakia’s Tax Authority with a firm owned by a regional official of her Slovak Democratic and Christian Union party (SDKÚ), was caused by earlier irresponsibility by Fico’s government.

Fico, however, has been keeping Radičová under fire on the August lease and said on September 6 that Smer would change its decision to initiate a no-confidence motion in parliament only if the prime minister sacked Mikloš. The following day, however, Fico added that his party was prepared to submit a proposal for a special parliamentary session to vote on removing the prime minister.

Radičová recently stated that the problems in renting premises for the tax office in Košice began in 2007 when Fico’s government decided to sign a lease contract with VSH company with a price tag €3.5 million higher than the price agreed to with the Nitra Invest firm this August.

Slovakia’s Tax Directorate signed a €6.3-million rental agreement on August 22 with Nitra Invest, a firm owned by Ondrej Ščurka, a district official of the SDKÚ, even though his firm was the sole bidder in a re-issued tender that was criticised as unfair after being analysed by Transparency International Slovensko (TIS) and Fair-Play Alliance, two watchdog NGOs.

The Sme daily reported on September 8 that a citizen who chose to remain anonymous submitted a criminal complaint against an unknown offender to the General Prosecutor’s office claiming that the tender conditions and the lease contract were harmful to the state. The complaint was forwarded to the prosecutor’s office in Banská Bystrica for investigation, Sme wrote.

The original lease for tax office premises in Košice, signed early in 2011 with Nitra Invest, caused considerable tension within the SDKÚ, the largest of the four parties in the ruling coalition, with Radičová clashing with Mikloš in April and then threatening to resign as prime minister if Miroslav Mikulčík, the head of the Tax Directorate, did not accept political responsibility for signing the contract without explaining the process used to select the firm. The prime minister eventually prevailed and Mikulčík, who had received Mikloš’s public support, stepped down and Nitra Invest cancelled the lease. A tender was then launched but subsequently cancelled, followed by another tender in July in which Nitra Invest was the only bidder.

Mikloš now says, as reported by the Sme daily, that the crux of the matter is that three important conditions were fulfilled in the process of signing the lease agreement with Nitra Invest: the law was respected; the whole process was in accordance with the public interest; and party cronyism was not involved.

“My authority, if this [the process] evokes distrust, is to propose the recall of the finance minister,” Radičová stated, as quoted by Sme. “I am not proposing his recall.”

Sme reported that Radičová said the tender prepared to seek bids for leasing of the tax office premises was as good as it could have been at that moment while at the same time she indicated that it was not perfect since the firms offering bids were known during the process.

“Please go ahead; if there is an address and a price at €6 per square metre, then provide it,” Radičová stated, as quoted by Sme.

The Fair-Play Alliance recommended on August 11 that the Tax Directorate not go forward with signing a lease with Nitra Invest and urged that the second tender be cancelled.

“The [tender] competition gave an advantage to Nitra Invest,” the alliance stated. “The competition was not announced with criteria that other bidders would be able to fulfil. Therefore we believe it wasn’t fair and didn’t provide the same conditions for all potential bidders.”

Interestingly, it was the Finance Ministry that had invited the two watchdog organisations to examine the tender, a virtually unprecedented step in Slovakia.

Both Transparency International Slovensko and Fair-Play Alliance concluded after analysing details of the tender that it should be cancelled because of concerns that several tender criteria were discriminatory or unclear, with TIS stating that the participation criteria and the evaluation methods were unnecessarily strict and had been changed between the first cancelled tender and the subsequent tender.

The watchdog group also wrote that the impact study on the rental deal was delivered late and had errors, and that changes in the tender specifications made in the course of the tender were not sufficiently explained to potential bidders.