US PRESIDENT Barack Obama may be one of the most transparent politicians in Slovakia – at least symbolically so – after his personal financial profile was published in an online database created by the Politikaopen project, an initiative that encourages Slovak elected officials to disclose more details about their personal assets and sources of income than is currently required by Slovak law. 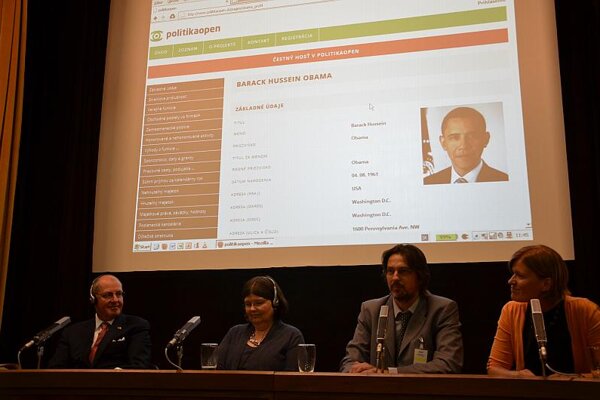 Jane Ley (second from left) (Source: Courtesy of the US Embassy)
Font size:A-|A+0

US PRESIDENT Barack Obama may be one of the most transparent politicians in Slovakia – at least symbolically so – after his personal financial profile was published in an online database created by the Politikaopen project, an initiative that encourages Slovak elected officials to disclose more details about their personal assets and sources of income than is currently required by Slovak law.

Politikaopen is a project of Fair-Play Alliance, a political watchdog group, and it is asking Slovak elected officials and candidates to disclose significant aspects of their finances and personal activities to the public, via the internet, in order to improve the public’s knowledge about those who hold or seek political office. Several Slovak politicians, including the prime minister and the speaker of parliament, posted their financial profiles on the website before the 2010 parliamentary election.

“20 years after [the fall of communism] Slovak citizens deserve that such a high standard becomes a part of the law too,” said Zuzana Wienk, the head of Fair-Play Alliance. That is why the alliance has called on members of parliament to pass a significant reform of Slovakia’s law governing conflicts of interest and to establish a legal standard on the kinds of detailed information on personal assets and personal interests that elected officials must release into the public domain. Wienk stressed that Slovakia also needs an oversight body that has the expertise and legal powers needed to investigate suspicions of conflicts of interest or other misconduct and to sanction individuals when it is necessary to do so.

The idea to create such an oversight body was inspired partly by the US Office for Government Ethics, whose deputy director, Jane Ley, spoke at an event jointly hosted by the Office of the Parliament, Fair-Play Alliance and the US Embassy in Bratislava on September 6 about the US experience in dealing with conflicts of interest by public officials. The event was held on the first day after parliament reconvened following its summer holidays and even though all MPs were invited to attend only a few were on hand to discuss ways in which more openness and transparency could be brought to Slovakia’s public service.

“[Financial disclosure] enables voters to determine on their own whether a politician may have a financial conflict of interest between the assets they personally own and the decisions they are making as a politician,” said Theodore Sedgwick, US Ambassador to Slovakia, in his opening remarks.

Sedgwick praised Slovakia for being an enthusiastic participant in a global initiative called Open Government, which is promoting more transparency in countries around the world.


“I do believe that countries who do actively participate in this will see greater foreign direct investment,” Sedgwick said, explaining that a transparent environment gives a greater sense of security to investors.

The rules on greater financial disclosure by public officials in the US originated mostly after the Watergate scandal in the early 1970s. Currently around 25,000 public officials must share details about their personal finances. The purpose of the system, which became effective in 1978, was not only to “keep the bad guys out” but also to help prevent potential conflicts of interest and to demonstrate the high level of integrity of the vast majority of public servants, Ley said at the discussion.

“It’s a shame that public oversight of financial disclosures in Slovakia is perceived as a sort of witch-hunt and that the whole system is based on repression only. That is, if a problem occurs, the parliamentary committee reviews it and the public expects some sanction to follow,” Wienk stated.

Ley said that her office in the US serves more like an advisor since the vast majority of those covered under the law want to respect it and act ethically but they sometimes run into questions or problems they are unable to resolve and they seek help from her office in determining whether their conduct will be in line with the law or not.

Slovakia does not have an office with a similar function and it does not have any kind of systematic training to help prepare those entering high public positions about the kinds of ethical challenges they might face or a consultative body that can advise a person whether there are possible conflicts of interest that should be resolved before accepting a public position, Wienk said.

All federal judges, all members of Congress – both in the Senate and the House of Representatives – as well as those serving in the executive branch such as high officials in government departments, and all candidates for federal elected positions in the US are required to prepare and submit financial disclosures documents, “so that those who are voting can determine what potential conflicts of interests this person might bring into the government”, Ley said.

There are also about 1,100 officials appointed by the president, including ambassadors, who are also required to file financial disclosure documents on a confidential basis with the Office for Government Ethics before their appointments are actually made.

“The agency goes through the form with them, tells them which assets would conflict with their duties if they are eventually appointed, and asks them to sell any of those that create a conflict and to resign from positions [with companies or other organisations] that could potentially create conflicts,” Ley said, adding that if that person agrees to these steps he or she then signs an ethics agreement that is made public, along with the financial disclosure document, after their appointment is announced.

When an individual reaches a senior level in a government agency or department, he or she is also required to file a financial disclosure document.

Ley noted that a very important feature in the US is that the system is enforceable as there are sanctions for filing the documentation late, for failing to file at all, and for false statements on the document, which can be punished by financial penalties and even imprisonment.

Slovak citizens too often see that dishonest or unethical conduct, hidden conflicts of interest, or abuse of power by those in high positions goes unpunished and that in some cases those engaging in misconduct or conflicts of interest end up prospering in society, Wienk noted, adding that Slovakia’s current oversight institutions are failing, including the parliamentary committee that reviews possible conflicts of interest.

She said this committee has never ordered a substantial penalty against a public official, not even when a conflict of interest or other misconduct was crystal clear.

A change will come only if a majority in society stand up for clear principles and not only formulate them but also believe in them and live according to them, and that individuals and small groups must be the drivers of such a change, Wienk said.

“What Slovakia needs are these individuals and groups who will serve as a shining example,” she said. “People need to see politicians they can trust, because otherwise they cannot believe that fairness, honesty and transparency really do pay off.”