Images immortalise Jewish past in Slovakia

THE OPENING of Last Folio, an exhibit of Yuri Dojc’s pictures of what remains of once-vibrant Jewish communities throughout Slovakia, served as the centrepiece of a weekend devoted to life in Slovakia, past and present, held at the Bloomington campus of Indiana University (IU) in early September. Peter Burian, Slovak ambassador to the United States, represented the Slovak government at the event. 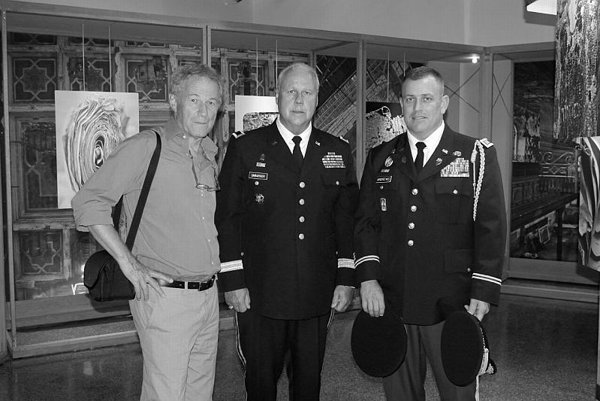 THE OPENING of Last Folio, an exhibit of Yuri Dojc’s pictures of what remains of once-vibrant Jewish communities throughout Slovakia, served as the centrepiece of a weekend devoted to life in Slovakia, past and present, held at the Bloomington campus of Indiana University (IU) in early September. Peter Burian, Slovak ambassador to the United States, represented the Slovak government at the event.

The Dojc exhibit originally opened at the Slovak National Museum, followed by presentations in Cambridge, England, and at the Museum of Jewish History in New York City.

Katya Krausova’s short documentary film, which she plans to extend to full length, was also featured in Bloomington. The short version can be seen online at http://vimeo.com/20779058.

Dojc and Krausova both left Czechoslovakia in 1968. He now works as a photographer in Canada and she is a film producer in London. The two met in London in 2005 at a meeting of expats.

The exhibit was designed by Daniel Weil, a native of Argentina, who also designed the interior of the new Archaeological Wing of the Israel Museum in Jerusalem, as well as aeroplane and airport interiors for United Airlines.

“Every time I see Yuri Dojc’s haunting photos of the objects left behind in a Slovak Jewish school after the town’s Jewish community was deported to concentration camps in 1942, I feel the horror of that moment,” observed professor Jeffrey Veidlinger, the director of IU’s Jewish Studies Program.

“The exhibition is also a message of perseverance and hope,” added Veidlinger, whose great-great grandfather emigrated from Slovakia. “Despite all attempts to erase any memory of the Jewish community of that town, over 60 years later, the objects are still telling their story – screaming for remembrance.”

“We were looking for the specks of dust, for the community that doesn’t exist anymore,” Dojc told a Bloomington symposium on the eve of the exhibit’s opening. “When I photograph the books, I feel like I’m photographing people.”

“The poignancy of the pictures is the neglect they show,” said history professor Mark Roseman. “Nothing so powerful connects to the human tragedy.” He expressed the fear that their preservation will destroy this image.

The exhibit also marked the renaming of Indiana University’s School of Fine Arts Gallery to the Grunwald Gallery, thanks to a gift from Rita Grunwald in honour of her late husband John, who was born in 1935 in Budapest to Jewish parents. He survived the Holocaust and came to New York and eventually to Bloomington.

Patrick O’Meara, Vice-President Emeritus of International Affairs at the university, helped coordinate the weekend in Bloomington. He conducted an hour-long radio interview with Dojc and Krausova during their visit, which will be broadcast later this year on WFIU, the university’s radio station. He also presided over a half-hour discussion at the opening of the exhibit attended by several hundred people.

“As the people of Slovakia move forward, it’s important that they recognise the legacy and problems of the past,” O’Meara observed after the opening night ceremony.

Ambassador Burian is the first Slovak ambassador to visit Indiana University though Rita Klimova, the last ambassador from Czechoslovakia, visited Bloomington in 1992.

The ambassador visited over lunch with IU Provost Karen Hanson. Also attending the lunch was Steve Zlatos, Honorary Consul for Slovakia, who serves Slovak interests in the states of Indiana, Kentucky and Tennessee. They were joined by Maj. Gen. R. Martin Umbarger, commander of the Indiana National Guard, which is paired with the Slovak armed forces under NATO’s Partnership for Peace program.

Earlier this year, Gen. Ľubomír Bulík, the Slovak Defence Chief, paid a visit to Indiana as guest of the National Guard.

After the lunch, Burian talked with IU faculty and graduate students interested in central and eastern European studies. He described the successes of Slovak foreign policy since the country’s founding and said relations between the US and Slovakia were very good. Burian pointed out that a joint military team from the Indiana National Guard and from Slovakia will deploy to Afghanistan later this year.

The ambassador expressed his hope that in an era of declining US federal support for academic studies of central Europe more university-to-university connections could be arranged. Burian was also interviewed by WFIU for later broadcast.