TRNAVA is sometimes known as the Little Rome due to the many churches scattered around the city, but locals, especially those with a musical ear, also know it as the town with the highest concentration of choirs per square metre. The long tradition of choral music in Trnava had been maintained in part thanks to the autumn festival of choirs which, after a recent hiatus, re-emerged in a very new form at the end of this summer. 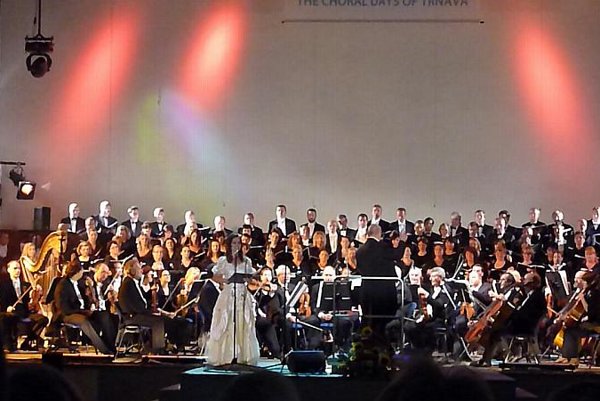 TRNAVA is sometimes known as the Little Rome due to the many churches scattered around the city, but locals, especially those with a musical ear, also know it as the town with the highest concentration of choirs per square metre. The long tradition of choral music in Trnava had been maintained in part thanks to the autumn festival of choirs which, after a recent hiatus, re-emerged in a very new form at the end of this summer.

The last Choral Days of Trnava, an event which used to welcome choirs from all around Slovakia and beyond, took place in 2008. That event was followed by three year of ‘silence’, until the first weekend of September 2011, when the 21st edition of the Choral Days of Trnava was organised, predominantly by the civic association Trnavské Mestské Zbory (Trnava City Choirs). During the interlude, the festival has lost most of its international character, since only Slovak choirs participated in the 2011 edition and the only international participants were the soloists who performed at the highlight concert of the festival. But that is not the only change that the event has undergone since 2008.

From a festival which was once held solely inside Trnava’s churches, with one day devoted strictly to church music and another to non-sacral music, the organisers have now turned the Choral Days of Trnava into an open-air event, making use of the town’s recently reconstructed amphitheatre. Thanks to this, visitors and participants alike were allowed to let their hair down, and people in jeans and t-shirts could be seen in the audience listening to arias from Verdi’s operas while enjoying a hot-dog or a glass of beer.

The evenings of the festival were divided according to genre: on jazz-musical-rock Friday the choir of Trnava’s secondary schools Cantica Nova and young Slovak singers offered a performance of Missa Criola by Ariel Ramírez, with soloist Viliam Csontos, and the rock oratorio Eversmiling Liberty by Danish composers Jens Johansen and Erling Kullberg, with solos sung by Mária Čírová and Kamil Mikulčík. Trnava’s Tirnavia choir added its interpretation of A Little Jazz Mass by Bob Chilcott and a selection of melodies from the musical West Side Story.

Saturday was devoted to all the participating choirs – Bradlan, Vox Aurumque, Cantica Nova, Tirnavia, Cantica /Z/nova, and Technik Akademik – who got the chance to show off their repertoire during the Choirs to Choirs concert.

The highlight of the festival, a concert entitled Verdi’s Opera Choirs and devoted to the 110th anniversary of the composer’s death, gathered an unprecedented number of people on the stage of the (rather small) city amphitheatre: the choir and orchestra of the Slovak National Theatre were joined by Trnava choirs Cantica /Z/nova and Technik Akademik to create one powerful voice while interpreting a number of Verdi’s most famous choirs and arias, led by Pavol Procházka – who at one point conducted which such force that he snapped his baton into two pieces.

The soloists represented all the countries of the central European region: sopranos Karina Skrzeszewska from Poland and Jolana Fogašová from Slovakia, tenor László Boldizsár from Hungary and bass Richard Novák from the Czech Republic.

The organisers promise that the choral event will not fall silent for so long again: they plan to make the festival a biennial event, pledging to attract more international participants in future years.