Could Slovakia be eurozone spoiler?

PRIME Minister Iveta Radičová should not link Slovakia’s ratification of changes in the eurozone bailout schemes to a confidence vote in her government, leading officials in the ruling coalition parties seem to agree. Yet, this shared position has not brought the Slovak Democratic and Christian Union (SDKÚ), Freedom and Solidarity (SaS), the Christian Democratic Movement (KDH) and Most-Híd parties any closer to an agreement that will garner enough votes in parliament for Slovakia to approve the changes to the European Financial Stability Facility (EFSF) or the creation of the European Stability Mechanism (ESM). 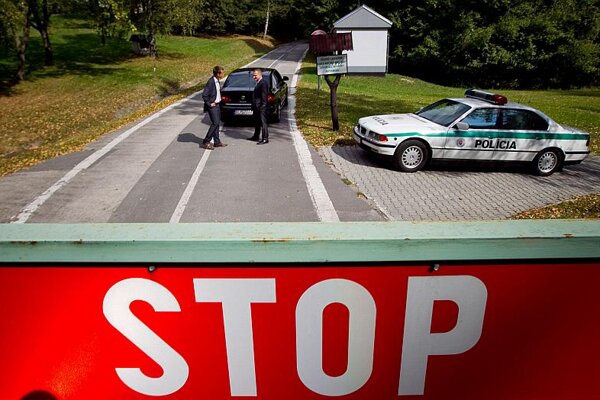 PRIME Minister Iveta Radičová should not link Slovakia’s ratification of changes in the eurozone bailout schemes to a confidence vote in her government, leading officials in the ruling coalition parties seem to agree. Yet, this shared position has not brought the Slovak Democratic and Christian Union (SDKÚ), Freedom and Solidarity (SaS), the Christian Democratic Movement (KDH) and Most-Híd parties any closer to an agreement that will garner enough votes in parliament for Slovakia to approve the changes to the European Financial Stability Facility (EFSF) or the creation of the European Stability Mechanism (ESM).

“We have an agreement that we will make sure in all our decisions that the people of Slovakia won’t lose out on a single cent,” Radičová told the media after an all-day meeting of party leaders and MPs on September 12. “This commitment is common to all of us and is official. There’s also agreement on further talks even though I’m afraid that our current state of affairs, which is three parties versus SaS, isn’t susceptible to easy change – if at all.”

The ruling coalition is sticking to its late-August decision that Slovakia should be the last of the eurozone countries to hold a parliamentary vote on ratification of the eurozone bailout mechanisms.

But in a move that outraged its coalition partners, SaS released a 16-page pamphlet to the public titled “Bailout Mechanism: A Road to Socialism” in which the coalition’s purportedly liberal party seeks to explain why it refuses to support the eurozone plan to deal with sovereign debt problems. The party said it would also publish English and German versions of the pamphlet.

The three other coalition partners immediately commented that Sulík’s SaS had broken its agreement not to run any kind of campaign about the changes in the eurozone bailout system that had been agreed upon by European leaders in July. SaS, however, claimed that it had not made any such promise.

“This is a response to all who have accused us of populism,” Sulík stated when presenting the 16-page pamphlet, which he said counters all the myths that some politicians have spread about the consequences of failure to approve the bailout mechanisms.

The SaS leader added that he hopes the document will persuade MPs from the other parties of the ruling coalition to change their opinions.

According to Ján Figeľ, the chairman of the KDH, the three other parties of the coalition have offered some compromise proposals to SaS, adding that the stability of the euro and Slovakia’s credibility are of key importance to his party.

“Three parties consider it crucial for the future development of Slovakia,” Figeľ stated, as quoted by the SITA newswire. “We have offered some compromises for finding the joint position that we want. It is a significant question of credibility by the state and thus the ruling coalition as well.”

Local media wrote about yet another crisis in the government, speculating whether the political differences on the eurozone issue are serious enough to bring down the coalition government.

Early on September 14, Radičová survived a no-confidence motion initiated by opposition leader Robert Fico over what he called the prime minister’s inability to lead. Of 147 deputies present for the vote, only 69 supported her recall and the motion failed. Deputies from SaS expressed strong support for Radičová during the debate on the motion.

Political analysts commented that the situation within the ruling coalition is quite serious. The president of the Institute for Public Affairs (IVO) think tank, Grigorij Mesežnikov, said that the ruling coalition would make the situation even worse if it did not manage “to hold the problem at the right end” suggesting that that the eurozone issue is a very specific topic that was not part of the government’s programme statement adopted in 2010.

“Pondering whether this issue could determine if the government survives or not is mistaken,” Mesežnikov told The Slovak Spectator. “Moreover, SaS is completely unambiguous: SaS is against it and it is no good trying to somehow break them when they have such a stand. It is not the best solution.”

Mesežnikov said a much better approach would be to address the opposition or put pressure on it since the Smer party has stated it does not have any concerns about the merits of the bailout plan's approach.

Fico does not want to break the deadlock


Fico, Smer’s chairman, said on September 13 that he would be willing to support the bailout mechanisms if the vote were linked to a law requiring an early parliamentary election.

The European socialist parties, with which Smer is aligned, support the eurozone stabilisation mechanisms developed and approved by European leaders. Nevertheless, Fico said his party would vote yes only if all the parties in the ruling coalition support it.

“Another possibility is that the prime minister links ratification [of the eurozone mechanisms] with a confidence vote in her government,” Fico stated on September 8.

Mesežnikov said he hopes that Radičová will exercise sufficient care not to link the vote on the bailout system with a confidence vote in her government, expressing the opinion that this approach would lead to a weakening of her position.

“If the ruling coalition fails to reach an agreement, the biggest winner from that will be Smer,” political analyst Miroslav Kusý told The Slovak Spectator, adding that Smer’s chances of creating a new government would improve under that scenario. But Kusý quickly added that it would be no great pleasure to govern the country under such circumstances.

Fico has stated that the ruling coalition perhaps imagines the situation unfolding in a way that Smer would break the deadlock over the bailout and parliament would go on to approve the legislation.

Concerning the likelihood that a parliamentary vote on the EFSF and ESM would be tied to a vote of confidence in her government, Radičová said it was not an option for her, a view shared by most of the other top players in the current political tug-of-war.

“The coalition of SDKÚ, SaS, KDH and Most-Híd was given the trust of citizens of Slovakia to create a government and has taken the obligation and responsibility to launch reforms in Slovakia,” SaS wrote in an official party statement. “We thus believe that the prime minister will not yield to the backstage games of Smer.”

Figeľ of KDH said on September 14, as reported by the TASR newswire, that it is relevant but premature at this point to think about tying together the vote on the eurozone mechanisms with a confidence vote in the Slovak government.

Sulík insists there has not yet been a truly professional debate about the issues surrounding the eurozone crisis and said the pamphlet released by SaS addresses this.

The pamphlet states that the most widespread myth is that Slovakia’s failure to ratify the proposed changes would repel foreigners from investing in the country.

Sulík’s response is that there are two factors that attract or repel investors: whether a country is managing its economy responsibly, and the quality of the business environment.

He wrote that approval of the bailout system would result in higher taxes in Slovakia and reduce the quality of its business environment.

Sulík also wrote that European politicians are using what he called senseless arguments such as “this is no longer about Greece, this is about the euro” to justify what he called continuation of “a moral hazard” and offered the analogy that “just as it is impossible to put out a fire with a fan, it is not possible to solve the crisis with new debts”.

Sulík has stated that Greece must go bankrupt, Italy must start saving money, and all members of the eurozone must start observing the rules.

“It will hurt, but it is the only solution,” Sulík wrote on the cover page of the pamphlet.

Kusý stressed that the debate over the European bailout system is not an academic issue but a political issue and that politics is “the art of compromise”.

Kusý added that SaS has to understand that it is now operating in a political arena and must choose whether to take a position from which it can harvest at least a partial victory, or stick to its position up to the point of no return.

The analyst sees room for SaS to retreat from a fixed position and noted that the party has actually offered several ways to do this. Kusý cautioned that “politicians should not follow the principle of all or nothing because in the end such a stance can be very self-destructive.”

Nevertheless, Kusý believes that SaS could be self-destructive under several scenarios and added that he believes SaS is aggressively objecting to the eurozone debt plan because it has seen a fall in its popularity in opinion polls.

“SaS was propelled very high quickly and since then has lost support very fast because it has not been able to fulfil its [pre-election] promises; this is mainly because the coalition has not adopted SaS’s promises as their own,” Kusý stated.