THE POWER of political parties in Slovakia reaches too far, according to several local and regional politicians. Recently, mayors of three municipalities in central Slovakia initiated a petition drive that would give more voice to ‘regional personalities’ as independent candidates in parliamentary elections at the expense of the power of political parties in slating candidates. But not all political experts share the mayors’ enthusiasm for the idea. 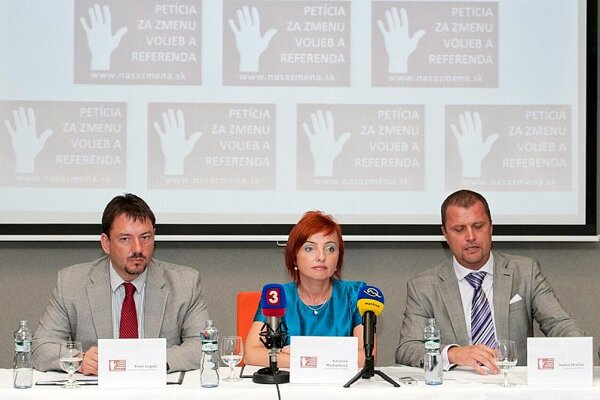 THE POWER of political parties in Slovakia reaches too far, according to several local and regional politicians. Recently, mayors of three municipalities in central Slovakia initiated a petition drive that would give more voice to ‘regional personalities’ as independent candidates in parliamentary elections at the expense of the power of political parties in slating candidates. But not all political experts share the mayors’ enthusiasm for the idea.

The mayors of three municipalities, Peter Gogola from Banská Bystrica, Andrej Hrnčiar from Martin, and Katarína Macháčková from Prievidza, who ran as independent candidates in last year’s municipal elections, presented an initiative in late August to change the electoral rules for Slovakia’s future parliamentary elections. They have now launched a petition seeking to change the rules for elections and referendums in line with their ideas. The petition campaign must gather at least 100,000 signatures to force parliament to discuss their proposals and 350,000 signatures for the proposals to be put before a public referendum.

The mayors state the main objectives of their initiative as being: to give an equal chance of election to every candidate running in a parliamentary election, without the requirement that a person is included on a political party’s slate; to encourage MPs to be truly independent when voting in parliament; and to ensure more equal representation to Slovakia’s regions by giving qualified individuals from regions outside Bratislava more of a chance to reach parliament. Under the mayors’ proposal, voters would be able to choose 150 MPs from across the political spectrum rather than choosing only the candidates on one party’s slate, as required under the current system.

“In this [proposed] system, every political party will have to find strong, mainly regional and local personalities, in order to win as many mandates as possible and be able to form the government,” the mayors’ document states, adding that in this way the electoral process would do away with what they call “Bratislavocentrism” as well. The mayors noted that 52 of the 150 current MPs have permanent residence in Bratislava and that another 30 to 40 live in Bratislava even though they have their permanent residence in some other Slovak municipality.

The idea of permitting independent candidates to run in the parliamentary election without being listed on a particular political party’s slate has been around for more than a year now, at least in the statements of Igor Matovič, who ran along with three colleagues from his group called Obyčajní ľudia (Ordinary People) on the slate of the Freedom and Solidarity (SaS) party and received enough preferential votes to reach parliament in 2010.

Matovič has often mentioned that it has been his dream to make a change in the parliamentary electoral system that would allow independent candidates to stand for election without being on a party slate. If such a change is not possible – which he says he does not expect due to resistance from the political parties – he has said he would found his own political party that would offer all 150 places on its list to independent candidates.

Matovič has even gone so far as to describe the current Election Code as unconstitutional because it gives the exclusive right to political parties to decide who can and who cannot be elected to parliament. He has also stated that MPs are not really free to cast their vote in parliament as they think best because they often must follow the directives of their parliamentary caucus even if they personally have a completely opposite opinion on the issue.

Matovič has not commented on the mayors’ initiative but his support is unlikely because he has also expressed his disagreement with a person occupying more than one elected position. His bottom-line proposal, however, is similar: adding an additional candidates’ list to be put before the voters in a parliamentary election, consisting of independent candidates listed in alphabetical order who have gathered at least 5,000 signatures and paid €100 to become candidates.

The proposal presented by the three mayors was prepared by Martin Klus, a political scientist and deputy rector at the University of Ss Cyril and Methodius in Trnava. Klus helped to draft SaS' election programme prior to the 2010 parliamentary election. He was previously accused of academic plagiarism, a claim which later proved to be true; Klus later apologised for his actions.

Too much ‘partocracy’ in Slovakia is one of the arguments used by the proponents of the new electoral system, with Klus even going as far as to call the current system “absolute rule of political parties and, through them, of a narrow political elite”.

The three mayors and Matovič argue that partocracy is too strong in Slovakia but political analyst Grigorij Mesežnikov of the Institute for Public Affairs (IVO) pointed out that it is typical for populists to play on anti-party sentiments within the populace – although he admitted that partocratic elements are strong in Slovakia. He stated that participatory parliamentary democracy has not come up with any better electoral mechanism.

“The parties are the main actors of the democratic political process,” Mesežnikov said, adding that political parties as institutions have been around for 150 years and honest motives have rarely been behind attempts to replace them as the main democratic institutions.

“Of course there are problematic features of this mechanism, but there is a certain stability in a participatory system constructed in this way,” Mesežnikov stated. “The parliament’s composition is based on the results of political parties, people are voting for political parties.”

Observers have said a risk in the system proposed by the mayors is that it might allow political extremists to get a seat in parliament.

“We do not doubt this risk, but we regard it as absolutely marginal in comparison with the principal changes that our proposal would bring, mainly in limiting the current absolute rule of political parties and through them rule by a narrow political elite,” Klus said. “Moreover, experiences from other countries, for instance Austria, prove that the easiest way to neutralise extremists is by offering them a small part in the administration of public affairs.”

Mesežnikov said that citizens have the potential to press the political system to be more stable, also through ways other than changing the entire electoral system.