OBSERVERS are warning that it could end up having a more serious impact on the country than those involved seem to realise. But the battle of words over changes to the eurozone bailout scheme intensified on September 20 when Richard Sulík, the leader of the dissenting coalition party Freedom and Solidarity (SaS), lined up 18 of his party’s MPs to restate that their party will not support the proposed changes in a parliamentary vote. 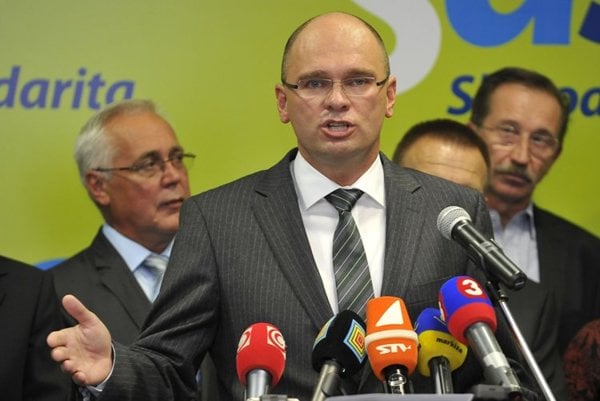 Richard Sulík and his SaS maintain they will not support the changes. (Source: TASR)
Font size:A-|A+0

OBSERVERS are warning that it could end up having a more serious impact on the country than those involved seem to realise. But the battle of words over changes to the eurozone bailout scheme intensified on September 20 when Richard Sulík, the leader of the dissenting coalition party Freedom and Solidarity (SaS), lined up 18 of his party’s MPs to restate that their party will not support the proposed changes in a parliamentary vote.

Slovakia’s Finance Minister Ivan Mikloš suggested on the same day that Prime Minister Iveta Radičová was inclined to tie ratification of changes to the European Financial Stability Facility (EFSF) and creation of the new European Stability Mechanism (ESM) to a confidence vote in the government, after SaS had rejected a compromise solution. Sulík called the idea of connecting the fate of the government to the ratification a weapon of the highest calibre on the part of the ruling coalition, as well as an attack on Radičová.

The prime minister, who at the time Mikloš made the statement was on an official trip in the United States, said in response, as quoted by the Reuters newswire, that linking the vote was theoretically possible.

“A very hot political issue” which is even being linked with the continuation of this government is how Radičová described the debate around the changes to the EFSF and the creation of the ESM on September 22, during a conversation with the president of the European Council, Herman Van Rompuy. However, she also stressed that for her the stability of the ruling coalition is a priority, SITA newswire reported.

“If they want to have it approved, they should negotiate with Smer,” Sulík told his ruling coalition colleagues, among whom there has been disagreement about the wisdom of linking any vote to the fate of the government.

Opposition Smer party boss Robert Fico predicted that the government would not break up, and dismissed the dispute as “just a game” in which each of the parties wants to appeal to a particular section of society.

“One section is for the EFSF, the other is against,” Fico said on September 21, as quoted by the TASR newswire. “Everybody is looking for their place with the voters.”

Political scientist Miroslav Kusý, however, told The Slovak Spectator that Fico is playing games as well and that “he is under pressure from the European Socialists, who are unambiguously in favour of the bailout mechanism”.

“Fico would have big problems with the European Socialists if Slovakia, due to his attitude, becomes the only country which rejects the bailout scheme,” Kusý said, adding that Fico still has a chance to save Slovakia’s image over the eurozone bailout.

The European Union still does not believe that Slovakia might say no to the changes, said Christian Democrat (KDH) MP Radoslav Procházka after meeting representatives of the European Central Bank and European Commission at a conference in Rome on September 21, SITA reported.

“The notion that in the case of the collapse of the eurozone we will be able to continue to borrow at the interest rates that apply today and that our banks will come out from the whole thing without a scratch is beyond common sense and totally ignores not only geo-political but also basic economic reality,” Procházka said.

He said that rejecting the bailout would turn the clock back ten years for Slovakia, to the time when the country was climbing out of the black hole into which the governments of Vladimír Mečiar had manoeuvred the country.

SaS strongly opposes the idea of linking ratification to a confidence vote in the government, and Sulík on September 20 said he could not envisage a situation in which Radičová would opt for this move and thus contribute to the return of a Fico government.

“One year ago our partners gained a mandate because they said they did not want to rule with Fico,” Sulík said, as quoted by SITA. “Today they are opening the door to him. What is this all about? The bailout isn’t part of the government’s programme. It is our right to say no.”

Sulík also said that the discussion on the bailout schemes is not being conducted on pragmatic grounds.

Mikloš, who insists that the votes should be linked, said that the attitude of SaS is in fact an expression of distrust towards Radičová, who at the negotiation between eurozone leaders supported the changes agreed. He described the SaS attitude as populism because it identifies with an idea that appeals to voters without considering the potentially grave effects that it might have on Slovakia, SITA reported.

Mikloš said he expects Slovak MPs to vote on the bailout by October 11.

Kusý opined that the desire to wield power is the strongest factor, and one that might still unite the coalition, adding that if it wants to rule until the end of this election term it will have to do so at the expense of painful compromises.

“This is one of those compromises, but similar issues will emerge again and again and it will be a test of what they are able to withstand because the alternative is the fall of the coalition and the return to power of Fico, who will then pick his own coalition partners,” Kusý told The Slovak Spectator. “And it would not be a morally acceptable solution for any party of the current ruling coalition to enter a coalition with Fico.”