Works by LaChapelle come to Slovakia

SOME people call him the Fellini of the photographic world, admiring his style and saying his works are moving the art of photography into the future. Others only see very colourful collages which look chaotic. But American photographer David LaChappelle has said that the goal of his photographs is to make a clear statement, without hidden connotations. 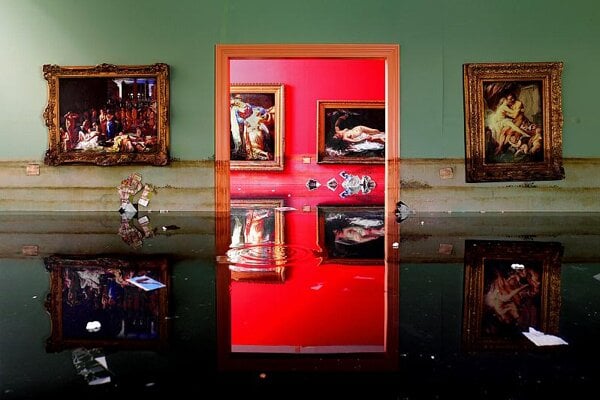 SOME people call him the Fellini of the photographic world, admiring his style and saying his works are moving the art of photography into the future. Others only see very colourful collages which look chaotic. But American photographer David LaChappelle has said that the goal of his photographs is to make a clear statement, without hidden connotations.

Lost and Found is the name of an exhibition that arrived in Bratislava on September 14. It presents LaChapelle’s works from the last decade – pieces reflecting LaChapelle’s view of consumer and pop society exhibited alongside his versions of works stylistically similar to Renaissance masters.

“LaChapelle is unmistakeable and irreplaceable,” said Marián Pauer, the curator of the exhibition, adding that people can always recognise photographs by LaChapelle. The curator noted that the photographer is always trying to bring new perspectives to his art.

The idea to bring an exhibition of LaChapelle’s works to Slovakia originated in the minds of Jozef Pavleye and Miloš Harajda from Pavleye Art and Culture, a Prague-based art agency. They told a Bratislava press conference on September 13 that bringing LaChapelle’s work here was not an easy task as they had to spend a whole year trying to contact his agents.

“It was only a coincidence that Miloš [Harajda] had an interview with David [LaChapelle] when he was in London,” Pavleye told the press, saying that this opened the door for the two of them to visit Hannover, where LaChapelle was presenting his exhibition Earth Laughs in Flowers.

“When David heard what we wanted and how and why we wanted to make it he became interested and persuaded everyone in the room that this was a good idea,” said Pavleye.

LaChapelle became well-known while he was working for Andy Warhol’s Interview magazine and several other major US magazines, including Rolling Stone, Vogue and Vanity Fair as well as The Face, a British magazine. In the last ten years LaChapelle has returned to the artistic side of photography and no longer works in the world of commercial photography.

“He often says that he never wanted to be famous and that he only wanted to make famous photographs,” Pauer stated. “He did not manage to succeed in the former wish because he has become famous, but he succeeded in the latter because his photographs are really renowned all around the world.”

Lost and Found is the very first exhibition of LaChapelle’s photographs in this part of Europe. Overall it includes 32 pieces, such as collections called Awakened, Negative Currency and The Crash, plus individual works depicting Michael Jackson, Pieta with Courtney Love and a large collage called Deluge.

The exhibition runs until October 30 at the Bratislava City Gallery's Pálffy Palace, Panská 19 in Bratislava.