A RAY of hope emerged for advocates of the European bailout schemes after a meeting between Prime Minister Iveta Radičová and Jozef Kollár, chairman of the parliamentary caucus of the coalition party Freedom and Solidarity (SaS), which has been a stern opponent of changes to the European Financial Stability Fund (EFSF) and the establishment of the European Stability Mechanism (ESM). Though, SaS was quick to release a statement following the September 28 meeting stressing that no agreement had been yet been reached, the party’s response to Radičová’s overture, at least as reported by local media, was not a definite ‘no’ this time. 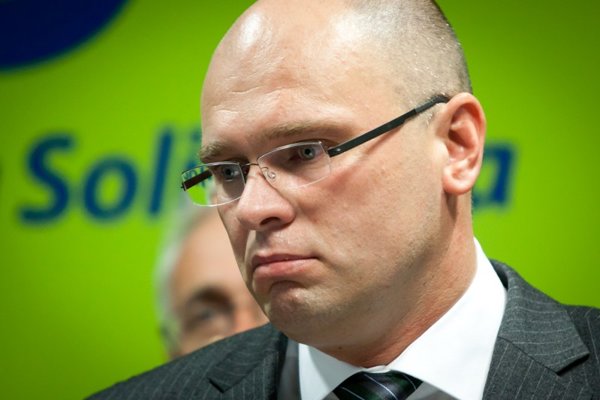 A RAY of hope emerged for advocates of the European bailout schemes after a meeting between Prime Minister Iveta Radičová and Jozef Kollár, chairman of the parliamentary caucus of the coalition party Freedom and Solidarity (SaS), which has been a stern opponent of changes to the European Financial Stability Fund (EFSF) and the establishment of the European Stability Mechanism (ESM). Though, SaS was quick to release a statement following the September 28 meeting stressing that no agreement had been yet been reached, the party’s response to Radičová’s overture, at least as reported by local media, was not a definite ‘no’ this time.

Pressure on the Slovak government has been mounting: it is expected to secure MPs’ consent to the changes by October 17, when the next summit of European leaders is scheduled to take place in Brussels.

“It is out of the question that the Slovak Republic would block [the other] 16 countries of the eurozone,” Radičová said on September 28 after a regular cabinet session. “It is unacceptable.”
The prime minister suggested that there were several ways to resolve the shortfall in support for the bailout scheme caused by SaS’ opposition. Finance Minister Ivan Mikloš said that it was not possible to change the content of the amendment to the framework agreement on the bailout mechanisms, but that internal procedures for approval might still change, the SITA newswire reported.

SaS boss Richard Sulík has repeatedly said that his party will not support changes to the bailout schemes unless his ruling partners come up with a solution which “would not cost Slovak taxpayers a single cent”. Sulík himself has enjoyed massive media attention and has been interviewed by several international media outlets.

The remaining three parties in the ruling coalition – Radičová’s Slovak Democratic and Christian Union (SDKÚ), the Christian Democratic Movement (KDH) and Most-Híd – have backed the scheme, but without the votes of SaS, the government does not have enough to ratify the changes in parliament without opposition support. The leader of the biggest opposition party, Robert Fico of Smer, says that his party will back the changes only if the ruling parties are themselves united, or if the government also agrees to hold early elections.

Pressure for an earlier vote

Though Sulík, who is also speaker of parliament, had previously said that the vote was expected to take place on October 25, voices calling for an earlier debate on the bailout schemes intensified: Most-Híd wants a vote to take place between October 13 and 16 at the latest, while Mikloš said there was no reason why changes to the EFSF should not be passed at the beginning of the parliamentary session beginning on October 11.

“My proposal, submitted to the recent Eurogroup session, was to have Slovakia vote on the EFSF on October 11, which would make us the last eurozone country to hold a vote,” Mikloš said, as quoted by the TASR newswire.

According to KDH leader Ján Figeľ, Slovakia would be cast in a bad light if it were the only country at the October 17 EU summit not to have a final position on the issue, especially given that the other 16 eurozone countries had handled EFSF matters with a great degree of urgency.

SaS meanwhile indicated its willingness to discuss the possibility of an earlier vote, on two conditions: that the Slovak Parliament must vote as the last country among the eurozone members, and that the relevant Slovak parliamentary committees would have to have submitted their stances on the legislation by the time of the vote.

Exactly what compromise had been offered by Radičová to SaS had not been confirmed by the time The Slovak Spectator went to print on September 29.

However, SaS caucus chair Kollár told TV Markíza on September 28 that SaS wanted to achieve a solution which met two objectives: that Slovakia would not block other countries from setting up a bailout mechanism, and that the solution would not cost Slovak taxpayers anything. When asked by the reporter whether the latest discussion with the prime minister looked like it would end in an agreement, his response was: ‘yes’.

The SDKÚ had earlier offered its own compromise: an addendum to the ruling coalition agreement under which the ruling parties would commit themselves to vote for the bailout schemes as well as a draft law on specific state obligations. The law would specify that the cabinet and the parliamentary committee for finance, budget and currency would decide on any subsequent financial obligation of Slovakia stemming from the bailout scheme.

“We are offering to give up some of the significant powers of the finance minister, who is an SDKÚ nominee, through the coalition agreement,” said SDKÚ leader Mikuláš Dzurinda, as quoted by Sme.
Dzurinda stressed that at cabinet meetings decisions are made through compromise and consensus, while a party that disagrees with a proposal has the option to summon a Coalition Council meeting. If any of the parties insists on having the right of veto included in the agreement then it can raise the issue.

SaS, however, rejected the SDKÚ proposal.

The proposed guarantees provided by Slovakia within the EFSF bailout mechanism should be increased from €4.371 billion to €7.727 billion, according to a proposal approved by the cabinet on September 28.

Discussions with Germany’s President Christian Wulff, who visited Slovakia on September 27, apparently did little to bring Sulík any closer to agreeing a compromise. The bailout mechanisms were the main focus of President Wulff’s visit to Slovakia and the German president stated that every problem has a solution if everyone thinks not only about themselves.

Wulff, who met his Slovak counterpart Ivan Gašparovič, said that the discussion over support for indebted eurozone member countries is very difficult because Slovakia proceeded in an exemplary way when it came to keeping its banking sector healthy and meeting its euro-adoption criteria. Wulff said that the debate might be more difficult than anywhere else, but said he believed the country’s top politicians would make the right decisions, SITA reported.

Observers have suggested that linking the vote on the bailout schemes to a vote of confidence in the government would be one way for the ruling coalition to put pressure on Sulík and his party. However, Radičová said on September 27 that the time was not right for this option.

“It is premature to use such an extreme tool that might lead to political destabilisation or even completely prevent us from completing the ongoing changes,” Radičová stressed prior to a meeting involving leaders of her SDKÚ party to discuss their options.

The meeting ended without any definitive answers. SaS is strongly against linking the votes, with Sulík suggesting during a political talkshow broadcast by TV Markíza earlier this month that people who are pushing Radičová to link the votes have other goals in mind than the bailout mechanisms. SDKÚ spokesman Michal Lukáč called the speculation nonsense.

Béla Bugár of Most-Hid has suggested that SaS’ seemingly firm position on the EFSF/ESM is due to the fact that voter preferences for SaS have decreased since the 2010 election and the party is using the issue to stir voters’ interest and support.