TWO amendments to Slovakia’s already controversial State Citizenship Act were presented on the same day – one from two members of parliament and one from the Interior Ministry, which later found what it called a mistake in its text and withdrew the amendment. But none of the proposed changes that will go to parliament in October soothed political leaders of the ethnic-Hungarian minority living in Slovakia, who have rejected anything less than a return to the status quo that existed before the citizenship law was amended by Robert Fico’s government in 2010. 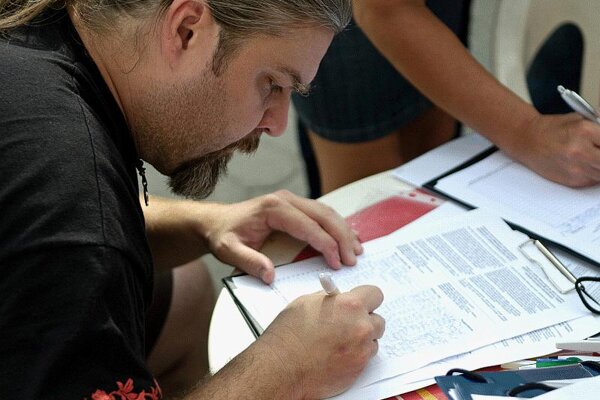 This man in Komárno was among several thousand people to sign a petition in September objecting to the current citizenship legislation. (Source: TASR)
Font size:A-|A+0

TWO amendments to Slovakia’s already controversial State Citizenship Act were presented on the same day – one from two members of parliament and one from the Interior Ministry, which later found what it called a mistake in its text and withdrew the amendment. But none of the proposed changes that will go to parliament in October soothed political leaders of the ethnic-Hungarian minority living in Slovakia, who have rejected anything less than a return to the status quo that existed before the citizenship law was amended by Robert Fico’s government in 2010.

MPs Pavol Hrušovský of the Christian Democratic Movement (KDH) and Jozef Mikuš of the Slovak Democratic and Christian Union (SDKÚ) proposed an amendment that would eliminate the obligation that all Slovak citizens who receive citizenship in another country are automatically stripped of their Slovak citizenship. The MPs’ amendment would allow Slovaks who can prove that they had some form of official residency in another country in which they subsequently acquired citizenship to also be able to retain their Slovak citizenship. The amendment proposes an effective date of January 1, 2012 and parliament is expected to debate the measure during its October session.

While Hrušovský and Mikuš stated there is political accord within the governing coalition on their amendment, the Most-Híd party, a member of the coalition that speaks for the ethnic-Hungarian minority, maintains that it is not willing to back any kind of a law that strips Slovaks of citizenship against their will.

“The solution is to return to the status quo that existed before the currently valid amendment was passed,” Nora Czuczorová, Most-Híd’s spokesperson, told The Slovak Spectator.

Review by the Constitutional Court

Most-Híd is now awaiting a ruling by the Constitutional Court, with Czuczorová stating that the court is the only competent body to decide on the constitutionality of the State Citizenship Act.

Most-Híd initiated a complaint with the Constitutional Court in early September that was signed by 44 MPs, arguing that the law is unconstitutional because it strips people of citizenship against their will.

“The complaint states that the act is at odds with the constitution and international conventions,” said Most-Híd MP Gábor Gál, as quoted by the TASR newswire.

In addition to all the members of parliament from Most-Híd, 12 MPs from the SDKÚ, independent MP Andrej Ďurkovský, and all the MPs from Freedom and Solidarity (SaS) signed the complaint that was submitted to the Constitutional Court.

The controversy over citizenship rules began in 2010 when Prime Minister Viktor Orbán of Hungary, in almost his first action after entering office, successfully amended Hungary’s citizenship law to allow ethnic Hungarians living in other countries, including Slovakia, to relatively easily acquire Hungarian citizenship. Around 10 percent of Slovakia’s residents speak Hungarian as their mother tongue.

Hrušovský and Mikuš said their amendment is intended to remedy some of the negative consequences that the Fico-initiated amendment, passed by Slovakia’s parliament in June 2010, has had on Slovak citizens, noting that more than 100 Slovaks have lost their citizenship since the law became effective on July 17, 2010. Of these, 11 lost their Slovak citizenship after receiving Hungarian citizenship.

Several Slovaks who chose to acquire Hungarian citizenship based on that country’s law have been challenging the Slovak citizenship law. One such person is Oliver Boldoghy, an actor at the Slovak National Theatre, who took the Hungarian citizenship oath in mid-September. As required by the current law he reported this to Slovak authorities in order to avoid being fined, but Hospodárske Noviny daily wrote that Boldoghy does not intend to voluntarily give up his Slovak passport and ID card.

“I’m sticking with the constitution, according to which my citizenship cannot be taken away from me,” he told the daily, adding that he believes the Constitutional Court will be supportive of his position.

The Interior Ministry also came with an unexpected amendment to the State Citizenship Act but withdrew it from parliament almost immediately on September 23.

The ministry’s amendment featured an exception for Slovak citizens who acquire or had acquired Czech citizenship. This part was included in the amendment due to a mistake made by employees of the ministry’s Section of Public Administration, Ľubomíra Miklovičová of the ministry’s press department told The Slovak Spectator.

“It’s unacceptable to grant another state citizenship without any form of residence in the other state,” said Interior Minister Daniel Lipšic, as quoted by TASR, adding that the ministry’s draft amendment would violate this principle.

According to Miklovičová, Lipšic has always followed this principle, for instance when dealing with requests for Slovak citizenship from those with a Slovak heritage living in other countries.

The Interior Ministry is planning to propose another amendment to the State Citizenship Act, as the government pledged to do in its 2010 programme statement, to resolve some practical problems that some individuals have encountered.