THE DAVID-and-Goliath size ratio of Slovakia and the USA, two countries which are also divided by an ocean, does not lower their appetite for business cooperation. Earlier this year Slovak Economy Minister Juraj Miškov went to the United States to remind businesspeople there of the investment opportunities in Slovakia, a country which has already become home to several successful US investment projects. 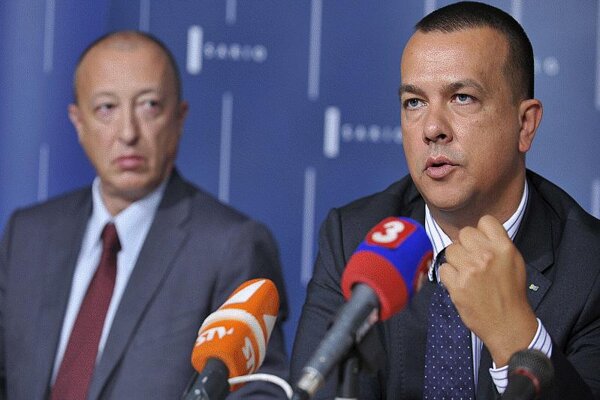 THE DAVID-and-Goliath size ratio of Slovakia and the USA, two countries which are also divided by an ocean, does not lower their appetite for business cooperation. Earlier this year Slovak Economy Minister Juraj Miškov went to the United States to remind businesspeople there of the investment opportunities in Slovakia, a country which has already become home to several successful US investment projects.

“Economic cooperation between our countries has a particular importance for Slovakia,” Dagmar Hlavatá, the head of the communications department at the Economy Ministry, told The Slovak Spectator. “The presence of Slovak companies in the US market is not very big, but in spite of this there are several companies which are successful [there], for example the IT company Eset.”

Nick Parikh, an economic officer at the US Embassy in Bratislava, also gave a positive evaluation of the cooperation between the two countries.

“The US and Slovakia have enjoyed broad and beneficial cooperation in the economic sphere from areas as varied as the business environment, trade, and investment,” Parikh told The Slovak Spectator. “Some of the largest and most advanced companies in Slovakia are US investments. We envision continued strong cooperation in all areas.”

There are many US companies operating in Slovakia. The sectors with the greatest US participation are steelmaking, automotive, IT, telecoms and insurance. There are over 120 US companies operating in Slovakia. Approximately one quarter of them are large investors. Among the most successful projects by American investors in Slovakia are U.S. Steel, IBM, Microsoft, Dell, Emerson, HP, Accenture, Johnson Controls, AT&T, Crown Bevcan and ICU Medical, said Hlavatá.

Based on data from the National Bank of Slovakia, aggregate US investments in Slovakia exceeded €623 million at the end of 2009, with no further significant investment arriving in the course of 2010.

Estimates by the US Embassy with regards to cumulative US investments in Slovakia are much higher.

“An informal survey by the US Embassy showed US investments in Slovakia at about €3.3 billion for current and future commitments, making the US the third largest source of foreign direct investment in Slovakia,” Parikh said, explaining that often these investments are made through subsidiaries based in Europe, so they appear in official statistics as investments from third countries.

According to Parikh, US investors most frequently mention three positive factors: first, Slovakia’s adoption of the euro as its currency, facilitating trade through lower transaction costs, higher pricing transparency, reduced risk of investment depreciation and greater monetary stability; second, the flat tax of 19 percent for corporate and personal income tax; and third, the motivation and abilities of Slovakia’s younger workers. US companies often praise them for having good foreign-language and computer skills. Slovaks also have a reputation for being technically skilled, particularly in heavy industry.

On the other hand, a recently released World Economic Forum report indicated that Slovakia’s competitiveness has dropped to a historically low 69th position, below all the other Visegrad Group countries, Poland, the Czech Republic and Hungary, Parikh pointed out.

“We believe this is due to a legacy of corruption and lack of transparency,” said Parikh. “American companies doing business in Slovakia have also complained about the transparency of regulatory processes in several industries, and a number of regulatory bodies are still considered by the business community to be less than fully independent.

According to the EC, sophisticated EU-level anti-corruption law is in place, but implementation and enforcement is uneven and remains unsatisfactory, reflecting a ‘lack of political commitment on the part of leaders and decision makers to combat corruption in all forms’.”

Parikh added that their hope is that the Slovak government will continue to increase transparency and good governance through its reform programme.

“We are pleased to see the Slovak Republic participating in international initiatives such as the Open Government Partnership, which was officially launched on September 20 in New York,” said Parikh.

Parikh sees value-added CIT (computers, information and telecommunication) services, renewable energy, tourism and franchising as the areas with the best prospects for cooperation, while Hlavatá sees as-yet unexploited opportunities for cooperation between universities and research institutions, especially in the field of research and development, and potential for the application of knowledge gained in industry. With respect to the US market, which is difficult to enter, she perceives the IT sector as having the best potential for the development of mutual cooperation from the viewpoint of Slovakia.

The global economic crisis slowed American-Slovak trade and business relations in general, even though 2010 brought something of a revival in trade.

Hlavatá ascribed these decreases to the economic crisis but also to the weak presentation of Slovakia in the American market over recent years, and the insufficient pitch to investors, tourists and so on compared to Slovakia’s competitors.

To change this, Minister Miškov and Róbert Šimončič, the head of the Slovak Investment and Trade Development Agency (SARIO), went to the USA in March. During their ten-day roadshow they visited Washington DC, New York, San Francisco and Chicago.

“The Ministry of Economy regards the investment roadshow as particularly successful, both with respect to the long-term outlook which Slovakia has in the US, and with respect to the immediate results which are being materialised in the creation of over 2,500 jobs in Slovakia,” Miškov said after his return on March 14, as quoted by the TASR newswire.

The new jobs should be created by established investors such as IBM, AT&T, HP and Johnson Controls, as well as by those who are now planning to arrive in Slovakia.

Miškov stressed that these announced investments should come to Slovakia without any financial support from the government.

During his trip to the US, Miškov and Saeed Amidi, the president and chief executive of the company Plug and Play Tech Center, signed a memorandum of understanding according to which Slovakia will get its first business incubator in Silicon Valley in the USA.

The ministry suggested that the creation of this incubator in the US will give a chance to small and medium-sized enterprises to succeed in this segment of business. Cooperation between Slovakia and the United States in creating the first Slovak space, or pavilion, in the centre might come to fruition in the course of 2011, said the department.

“The memorandum is a start-up mechanism for cooperation in the establishment of the first Slovak pavilion in the Plug and Play Technical Center in San Francisco,” said Miškov.