MIXING and joining. That is what Slovakia’s Convergences festival has been doing for over a decade and its 2011 edition proved again that having the courage and enthusiasm to merge different musical styles and various artists – who may seem worlds apart – pays dividends when approached with an open mind and a good musical ear. 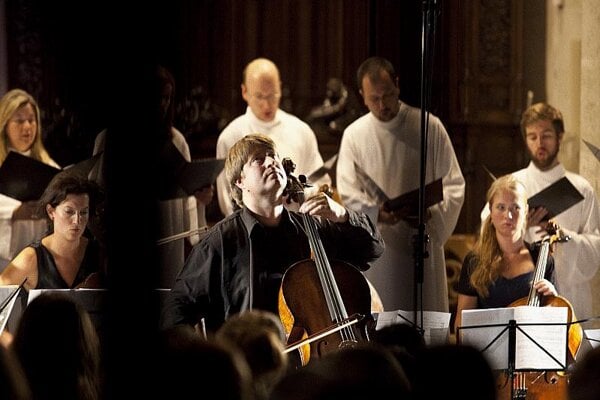 MIXING and joining. That is what Slovakia’s Convergences festival has been doing for over a decade and its 2011 edition proved again that having the courage and enthusiasm to merge different musical styles and various artists – who may seem worlds apart – pays dividends when approached with an open mind and a good musical ear.

Jozef Lupták, the founder of the festival, has both attributes in spades and for that reason Convergences has grown over the past 12 years from a couple of days of performances by chamber orchestras into a week-long event that goes far beyond that genre even though Lupták has said that chamber music remains the foundation of the festival.

“Since I am interested in other styles, other viewpoints and new connections, the festival started naturally expanding but I would be glad for it to stay as ‘chamber’ in expression,” he stated. “Obviously, we are not shying away from bigger projects, but at the same time I want to preserve the chamber feeling because that is when the communicativeness between art and humanity is the strongest.”

The festival opened with a performance by Cello Colosseum, a grouping of eight cellists, and Gregoriana, a Košice group singing Gregorian chorals in St Martin’s Cathedral, which Lupták called a magnificent space for such a concert.

“I like that space very much and I like it because it is kind of a central space of Bratislava,” Lupták said. “And the connection between this reconstructed factory, the Design Factory [the traditional venue of the Convergences festival], and the sacral space of the cathedral, a central space in Bratislava, is symbolic for me.”

Lupták added that the sites for Convergences have always moved between modern buildings and sacral spaces but the cathedral was first used for the festival in 2010.

“I immediately liked it, especially because a mutual symbiosis emerged between the people who administer the cathedral and the festival and they asked us to return,” Lupták said, adding that he would definitely like to use the cathedral for future festivals.

“The connection between the present and history in the sacral space seems very symbolic and beautiful to us,” Lupták stated.

Lupták said that in organising the Cello Colloseum project he focused on younger cellists from outside and from within Slovakia and invited them to work together.

“The Cello Colloseum project acquired a youthful freshness,” Lupták added, noting that they played both dramatic and meditative music.

“I am very grateful that we have been invited to play at this festival since there are not many festival podiums where one can present this kind of music,” said Jana Kirschner, a Slovak singer whose performance at this year’s Convergences was her only recent concert in Bratislava.

Kirschner’s newest album, Krajina rovina, has been on sale for about two years now. Although she has repeatedly stressed that it is different from her previous works – as she started her career as a more or less mainstream musician – the album has been received with great enthusiasm, as was her Convergences concert on March 24 where Kirschner presented her ‘sound laboratory’, making each of her songs a special experience for the audience.

Kirschner shared the stage on Saturday with the afterPhurikane project, an experiment which emerged in 2007 as a way to bring together Roma and non-Roma musicians. This year’s Convergences offered the following constellation: Jozef Lupták on cello, accordionist Boris Lenko, percussionist Thierry Ebam, and five amateur Roma singers – Marcela and Jozef Dreveňák, Martina Ďuďová, Irena Pokutová and Béla Pokuta. Their array of gypsy music, mingled with melodies of composers such as Astor Piazzolla, brought the audience alive.

“The connection between afterPhurikane and Jana Kirschner falls very well under the philosophy of the festival,” said Lupták. “Such convergence, which may have seemed unimaginable in the past, is exactly what the festival is aiming for.”

Seven musicians, one narrator, and single male and female dancers performed The Soldier’s Tale, a composition by Igor Stravinsky with lyrics written by Charles Ferdinand Ramuz. It wrapped up the festival in grand style – with prominent Slovak actor Robert Roth in the leading role.

Even though this Faust-like story of a soldier who exchanges his violin with the Devil in return for a book that will show him how to acquire all he desires is almost one hundred years old, its message is timeless and artists and audiences return to it again and again.

In the version offered at this year’s festival, director Silvester Lavrík intertwined the original text, narrated by Roth, with Slovak poems by Vojtech Mihálik, Milan Rúfus, Miroslav Válek and Ján Ondruš about topics such as returning home, scepticism about civilisation and finding a new chance for mankind after two world wars.

The audience’s reaction to The Soldier’s Tale proved that the choice was right – festival organisers had to invite the public to the final rehearsal as tickets for the closing performance of the festival were sold out almost immediately after they were put on sale.

This was not the first theatrical performance offered by the festival as Roth had performed at Convergences in the past, but those were not dramas, only recitations.

“This is practically our premiere of such depth,” Lupták said. “A work of art like this is quite unusual for us because it’s got music, an actor, dance, scenery… It’s a kind of chamber opera, but not completely.”

Lupták added that he would like to continue in this direction.

“Particularly from the 20th century we’ve got several scenic works that don’t get presented at all, even though they are very significant,” Lupták said, adding that they are missing from the programmes of both theatres and concert halls. He said these included authors from the Viennese, Russian and German schools, but also Czech-born composer Bohuslav Martinú.

“They wrote unusual chamber works that went beyond classical music,” Lupták said. “We would like to bring something of this kind in the future.”

In addition to what have become traditional sessions of Lupták with his friends, such as the From Songs to Tango performance of the works of Felix Mendelssohn Bartholdy and Astor Piazzolla, this year’s Convergences programme welcomed performances by the Doric String Quartet from the UK, jazz artists AsGuests, and Solamente Naturali presenting 17th and 18th century music.

Zuzana Vilikovská and Jana Liptáková contributed to this article