AT LEAST one Czech hospital has started recruiting physicians from Slovakia while another hospital in that country reported an increased interest in employment from Slovak physicians after 2,411 doctors working in hospitals across Slovakia submitted notices to terminate their employment contracts on September 29. Health Minister Ivan Uhliarik restated that urgent health care will be available in Slovakia even if these doctors resign from their hospitals. 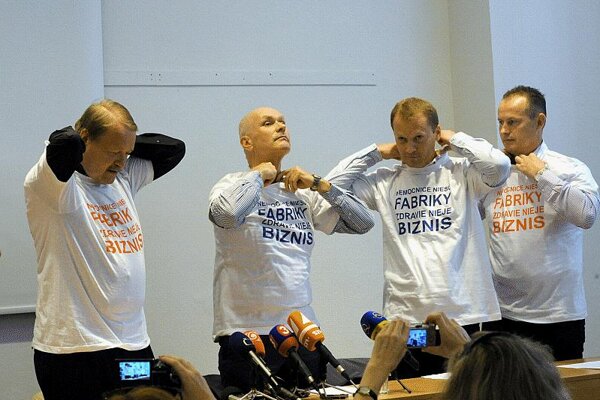 AT LEAST one Czech hospital has started recruiting physicians from Slovakia while another hospital in that country reported an increased interest in employment from Slovak physicians after 2,411 doctors working in hospitals across Slovakia submitted notices to terminate their employment contracts on September 29. Health Minister Ivan Uhliarik restated that urgent health care will be available in Slovakia even if these doctors resign from their hospitals.

The Slovak doctors chose the tactic of mass resignation to demonstrate their opposition to a proposal pursued by the Health Ministry to change the legal form of state-run hospitals as well as to demand more health-care funding, higher salaries and adherence by hospitals to the Labour Code. After meeting with directors of state-run hospitals on October 4, Uhliarik, who was nominated to his post by the Christian Democratic Movement (KDH), said that some doctors are now withdrawing their notices, something that the ministry and the hospitals had hoped would happen.

“Every day the notices of some physicians are being withdrawn,” Uhliarik stated on October 4, as quoted by SITA. “We will have to keep persuading and motivating the physicians to withdraw their resignations.”

While Uhliarik remained tight-lipped about the types of motivation the hospital directors might use, he did say that the directors will accept withdrawal of the notices only until the end of October.

“Unfortunately, after November 1, the directors of hospitals will have to seek other physicians for these positions,” Uhliarik said, adding that the teaching hospital in Prešov currently has 100 job applications and that it recently hired two new physicians.

Uhliarik stated the hospitals are not yet considering hiring physicians from other countries.

Representatives of the doctors’ trade unions who met with Uhliarik on October 5 denied that the protesting physicians were withdrawing their notices en masse. It was unclear how many physicians might have withdrawn their resignation notices when The Slovak Spectator went to print on October 6.

Marián Kollár, chairman of the Medical Trade Unions Association (LOZ), said on October 5 that additional doctors were joining the protest by signing notices to terminate their employment contracts, according to the Sme daily. TV Markíza quoted an unnamed physician who said the medical unions were pressuring doctors to sign the notices. On October 5 the unions also submitted a legislative proposal to increase the salaries of physicians working in state-run hospitals

Slovak media have been speculating for some time that hospitals in neighbouring countries, particularly in the Czech Republic, might try to hire Slovak health-care specialists.

Sme wrote that Czech hospitals have been advertising openings for physicians for some time and that a Czech hospital in Vsetín has a recruitment campaign targeted at physicians from Žilina in northern Slovakia, a fact confirmed by Robert Fícek, the head of the doctors’ trade union in Žilina. A physician working in a Slovak hospital earns an average of €1,500 per month while some Czech hospitals are able to offer €2,211, Sme wrote.

Some hospital directors have conceded that the number of termination notices they have received may cause problems and SITA wrote that the situation at Children’s University Hospital in Bratislava may be most critical as nearly all of the hospital’s anaesthesiologists have submitted resignation notices.

Uhliarik reported that doctors from 18 hospitals have submitted resignation notices from among the 59 health-care institutions that the Health Ministry administers and stated that most hospitals will remain in a normal operational mode and complete care will be available for cancer and cardiology patients.

Kollár has warned that hospital medical treatment in Slovakia could collapse in December after the two-month notice period has run its course. Uhliarik responded by accusing the doctors of using patients as hostages, but at the same time assured Slovaks that they need not worry about being left without proper health care.

LOZ has rallied doctors around four demands: a halt in the ministry’s plan to transform public hospitals into joint-stock companies; for hospitals to follow the Labour Code with respect to hours of work and other working conditions; an increase in government funding for health care; and a gradual rise in the salaries of health-care employees.

The demand to halt the transformation of the state-run hospitals into joint-stock companies seems to be the most contentious issue but Uhliarik said it is impossible for him to change this as the process was agreed by MPs and has now begun.

On September 27 the Slovak cabinet approved revised documents for the legal transformation of the hospitals, including a model founding document and model statute for a joint-stock company. Prime Minister Iveta Radičová said after that cabinet meeting that changing the legal status of the hospitals has nothing to do with privatisation.

“The transformation does not create, anticipate or enable privatisation,” Radičová stated, as quoted by the SITA newswire, emphasising that the model statute clearly provides that these joint-stock hospitals will continue to be 100-percent state-owned.