Harnessing the sun on marginal land

SOLAR energy has become a popular discussion topic in Slovakia. Only recently, charges of corruption and fraud related to state support provided to newly-constructed photovoltaic power stations in the form of generous feed-in tariffs have hit the Slovak media. While investigation of these cases is still continuing, a look at other solar projects suggests that the baby should be not thrown out with the bath water. 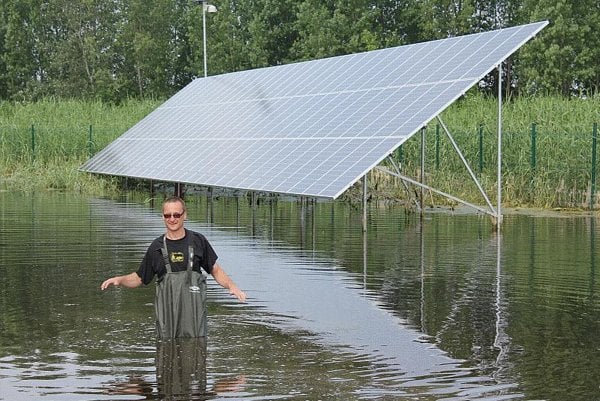 SOLAR energy has become a popular discussion topic in Slovakia. Only recently, charges of corruption and fraud related to state support provided to newly-constructed photovoltaic power stations in the form of generous feed-in tariffs have hit the Slovak media. While investigation of these cases is still continuing, a look at other solar projects suggests that the baby should be not thrown out with the bath water.

Slovakia was one of six European countries, three from central and three from southern Europe, which joined in the Photovoltaics (PVs) in Bloom Project entitled "Farming photovoltaic flowers: a new challenge for land valorisation within a strategic eco-sustainable approach to local development". Its aim was to explore how to use marginal land and terrain that is not of agricultural use, and it concluded that it is possible to produce solar energy on airports, military bases, landfill sites and swamp lands. Project partners built more than 19 megawatts-peak (MWp) of installed solar power on marginal lands. Slovakia has various examples of installation in marginal areas, such as PVE Dolný Bar, a photovoltaic power plant built on swampy land, with an installed capacity of 1 MWp; PVE Želiezovce, built on a municipal dump, with an installed capacity of 3 MWp; and PVE Dobšiná, built in an asbestos quarry, with an installed capacity of 2 MWp.

The Slovak Spectator spoke to Giorgio Dovigi, the secretary general of the Italian-Slovak Chamber of Commerce about the PVs in Bloom Project and the harnessing of solar energy in Slovakia.

The Slovak Spectator (TSS): Why and how did the Italian-Slovak Chamber of Commerce became one of the partners in the PVs in Bloom Project?

The Italian-Slovak Chamber of Commerce undertakes projects in the field of renewable energies not only to encourage and support the export activities of Italian and Slovak companies working in this sector, but also because we really believe in the importance of promoting policies related to environmentally-sensitive technologies. We are constantly following a series of projects concerning renewable energy sources. At the time that we submitted the project PVs in Bloom, Slovakia’s solar energy market was emerging.

TSS: What was the philosophy behind the PVs in Bloom Project?

Photovoltaic power is a form of technology and as with all technologies it should be applied using a sustainable rationale. So we explored how to use marginal land and terrain that is not of agricultural value, sought reasons why such unproductive pieces of land might not be suitable, observed how we would build various models, and saw what other actors were doing in other countries.

TSS: How did you identify such land in Slovakia?

We visited self-governing regions and had encouraging meetings with representatives of municipal authorities in Slovakia, presenting and explaining to them the philosophy of the project. Through a series of meetings we gained more information about marginal areas.

Contrary to the experience of the rest of the project partners, we found considerable understanding on the part of Slovak public authorities and valued their support for renewable energy, even though recent changes in the feed-in tariff policy in Slovakia towards photovoltaic power makes this industry unattractive to investors as prices have not only been drastically reduced, but additional restrictions have been introduced for this type of installation and power.

TSS: Can you compare Slovakia with other countries participating in the PVs in Bloom project in terms of photovoltaic installations on marginal land, for instance in terms of the land available and the position of municipal and other authorities?

Considering the size of Slovakia, the number of installations in marginal land in our country is considerable. We cannot in any way compare the results with those achieved by countries like Italy and Germany, with installed capacities of 2,321 MW and 7,408 MW, respectively, in 2010.

TSS: What is the role of such projects in a practical sense?

The partnership worked according to a collection of EU best practices and in the end we built 19 MWp of photovoltaic plants, and negotiated with banks and regional administration to get faster approval of licences. Our role is to find the best solutions in terms of how to work, and we drew upon some significant best practices.

The project involved three countries from central Europe and three from southern Europe in order to better compare technologies and practices given the various solar radiation levels and natural potential. One added value of the project should be considered the pulling-together effect on different public bodies and private investors to obtain concrete results. Within PVs in Bloom, 67 municipalities across Europe were directly involved in projects focusing on the recovery of marginal areas through renewable energy generation.

We have also developed a complete manual on administrative and technical procedures, as well as business plan samples and calculations that can be found in the Slovak language on the website of the project.

TSS: The PVs in Bloom Project culminated with a closing conference in Budapest on September 22. Could you please give some interesting experiences and examples of innovative approaches presented at the conference?

One of the most innovative projects presented was about a solar plant developed on a swampy dump by Ján Otčenáš, a solar expert from the company Solar Time. The solutions used for long-term stability of this type of construction included the use of additional sleeves added to anchor screws (some anchor screws used are up to 3 metres long), the placement of inverters and other electrical equipment in a higher position, and the water-protection of all cables used so that they were certified waterproof.

TSS: Taking into consideration the current feed-in tariff policy in Slovakia and restrictions on this type of installation, but also the decreasing costs of photovoltaic generation, how would you evaluate Slovakia as a potential destination for investment in photovoltaic plants?

As of July this year the photovoltaic industry in Slovakia is interesting only for rooftop installations up to 100 kW. Such installation of rooftop solar projects requires management of permit-granting processes that generally involve the power authority, distribution companies and municipalities. I see Slovakia as a market for small-scale solar businesses, and attractive mostly to local investors.

TSS: Are you going to develop on the experience obtained through PVs in Bloom?

Yes. Of course, we are following trends in the sector and trying to be very active in order to encourage local economic actors and public actors in the responsible use of energy sources as a contribution to climate change issues. As of April we have started another project in cooperation with the partners from PVs in Bloom. This time we would like to develop a model for green-blue factories, a benchmark for labelling industrial zones and related facilities that use combined sources of renewable energy to meet their electricity and heating needs.

The PVs in Bloom Project was funded within the Intelligent Energy Europe Programme of the European Commission. It was managed by an international consortium, led by Unioncamere del Veneto (the Regional Union of Chambers of Commerce of Veneto, in north-east Italy) and composed of nine partners from six EU countries: Italy, Greece, Spain, Poland, Austria, and Slovakia.

To get more information about the project, go to www.pvsinbloom.eu.