PERHAPS because 2011 was designated the European Year of Volunteering, the Days of Volunteering on September 23 and 24 in Slovakia drew a record number of 6,651 volunteers who lent a helping hand to many types of organisations and people in need. 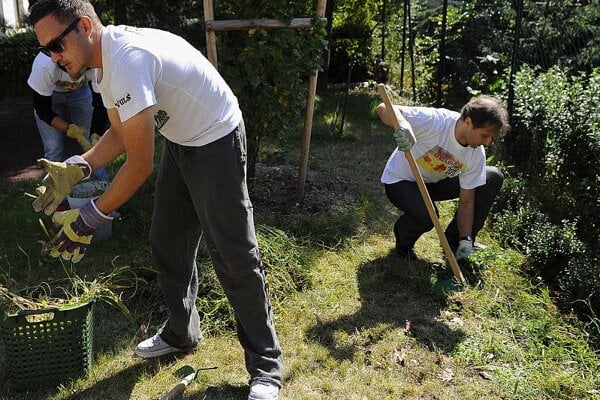 PERHAPS because 2011 was designated the European Year of Volunteering, the Days of Volunteering on September 23 and 24 in Slovakia drew a record number of 6,651 volunteers who lent a helping hand to many types of organisations and people in need.

The total number of hours spent by the volunteers helping others reached 23,870 and the activities included painting and decorating outdoor and indoor spaces, assisting seniors and hospital patients, cleaning natural areas, and crafting small gifts. In addition to adults and company teams, students from elementary and secondary schools and groups of seniors also volunteered their hands and hearts.

“The biggest number at a single event or facility was 555 volunteers at an event in Žiar nad Hronom in central Slovakia where they helped prepare a theatre performance for mentally disabled persons and seniors,” Alžbeta Mračková of the C.A.R.D.O. civic association told the SITA newswire.

“In eastern Slovakia, the most volunteers gathered in Trebišov, where 185 people worked in the town park and in the damaged amphitheatre. In Bratislava, 110 volunteers cleaned the nature reserve of Soví Les, Hrabín and Chorvátske rameno,” Mračková added. She noted that several celebrities supported the volunteering events such as actors Lukáš Latinák, who has the title ambassador of volunteering in Slovakia, and Juraj Kemka, who helped with gardening in Horský Park in Bratislava.

Lucia Hablovičová – the ambassador of the European Year of Volunteering 2011 – along with singer Misha, ballet dancer and choreographer Mário Radačovský, Miška Ňurciková (Miss Slovensko 2011), Jakub Petraník, a participant in the Superstar / Slovakia Has Talent TV competition, actress Mirka Partlová, and singers Martin Madej and Robo Papp helped with gardening and also decorated the interior of a centre for autistic people.

In Nitra, volunteers helped with the registration of participants at the Divadelná Nitra festival together with actress Kristína Farkašová, according to Jana Andreasová of the Nitra volunteering association.

Mračková said that her organisation conducted a poll and found that 27.5 percent of Slovaks work for a specific organisation as a volunteer and more than half of all people aged over 15 help informally.

She added that an amendment to the law on volunteering that is expected to be passed by parliament before the end of this year will help to improve volunteering in Slovakia.