THE DEBATE on the European bailout fund, the EFSF, preceding a vote the result of which is anticipated across the globe, and which will decide the future of Iveta Radičová’s government, was launched this afternoon. 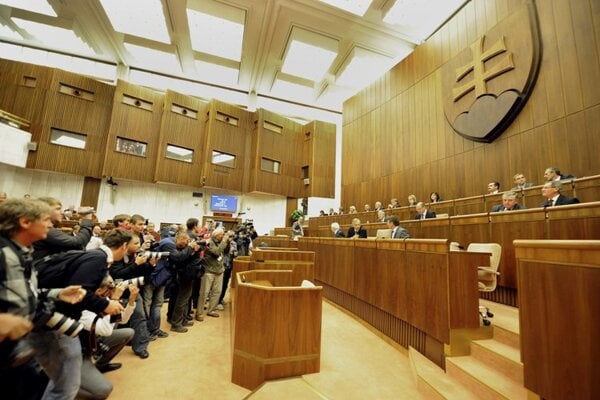 THE DEBATE on the European bailout fund, the EFSF, preceding a vote the result of which is anticipated across the globe, and which will decide the future of Iveta Radičová’s government, was launched this afternoon.

The Slovak parliament is packed with foreign journalists and diplomats. Ambassadors to Slovakia from many countries are watching the debate from the parliament’s balcony, along with their translators who are frantically deciphering the debate as it unfolds.

There are about a hundred foreign correspondents from the world’s media, including the BBC, two German television networks (ARD and ZDF), the Austrian network ORF, three Japanese networks, newswires including the Associated Press, and the world’s biggest dailies including The Washington Post, The Guardian, and The New York Times, according to Sme daily.

The vote is expected no earlier than 6 pm, as it is likely to be a drawn-out debate. Heads of all four coalition parties, ministers, and the prime minister have all contributed to the debate so far.

Finance Minister Ivan Mikloš, the first minister to participate, argued that rejecting the bailout mechanism would have immense consequences, great economic and social costs, and could pose a threat to the European common currency. In his speech Mikloš dismissed what he described as the myths surrounding the EFSF.

“The myths about the EFSF are just a tool of populist politics, which harms not only Slovakia, but causes problems all around the world,” Mikloš told the MPs, adding that the good name of Slovakia has already been harmed and that parliament should prevent it from becoming more so.

Parliamentary Speaker and SaS leader Richard Sulík repeated his arguments against the bailout fund, arguing that supporting it contradicts the programme statement of the government, and that it “generally contradicts common sense”.

“I’d rather be a pariah in Brussels than have to feel ashamed in front of my own children,” Sulík said.

On several occasions coalition parties implied that SaS are abusing such a serious issue as the EFSF for their own purposes of political marketing.

“You have put partisan interests above the interests of Slovakia,” Most-Híd leader Bela Bugar declared in his response to Sulík.

Prime Minister Iveta Radičová stressed in her speech to parliament that participation in the bailout fund is a necessity. She told listening MPs that the Portuguese prime minister had warned her she is “causing him heart-attack moments”.

“Responsible politics can only be done in a way that includes a moral dimension,” Radičová said, suggesting that narrow-sighted politics doesn’t favour morals.
Around 4 pm the result of the vote was still far from clear. Smer announced that its MPs were going to be present in the room, but would abstain from the vote on the bailout mechanism. Smaller groupings within parliament were divided over the issue: Ordinary People have said they won’t vote, but one of their MPs, Jozef Viskupič, said he would vote in favour of the bailout, arguing that the survival of the government is of the utmost importance.

Two MPs from the Civic Conservative Party (OKS) sitting in the Most-Híd caucus, Peter Zajac and František Šebej, have said that they will support the government, while the party’s other two MPs, Ondrej Dostál and Peter Osuský, have said they won’t.