UNTIL this month, the plans of almost all Slovakia’s politicians had been predicated on the next general election not being held until 2014. But with the sudden fall of the government on October 11 that election has suddenly been brought forward to March 2012. And the implosion of the four-party coalition means that unlike in 2010, when the centre-right parties were focused on denying Robert Fico the keys to the prime minister’s office, this time they are likely to be fighting just as hard among themselves. 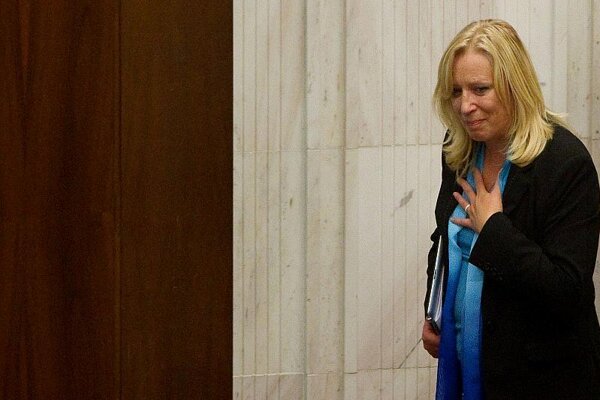 A shaken Iveta Radièová leaves the parliamentary chamber on the evening of October 11 after MPs failed to pass the eurozone-bailout mechanism, leading to the fall of her coalition government. (Source: Sme- Vladimír Šimíèek)
Font size:A-|A+0

UNTIL this month, the plans of almost all Slovakia’s politicians had been predicated on the next general election not being held until 2014. But with the sudden fall of the government on October 11 that election has suddenly been brought forward to March 2012. And the implosion of the four-party coalition means that unlike in 2010, when the centre-right parties were focused on denying Robert Fico the keys to the prime minister’s office, this time they are likely to be fighting just as hard among themselves.

The early elections are the price that three of the country’s four ruling coalition parties had to pay to Fico, leader of the opposition Smer party, in return for his support for enlargement of the eurozone’s temporary bailout fund after the fourth coalition party, Freedom and Solidarity (SaS), refused give its assent.

Because Radičová, following the rejection by SaS of her final compromise proposal, linked the crucial vote on the European Financial Stability Facility (EFSF) with a vote of confidence in her government, the ‘no’ by SaS also meant the fall of her government. Even a last-minute appeal from Radičová shortly before the vote on October 11 failed to sway SaS deputies.

“I am asking you to express confidence in this government, to demonstrate that you agree it is handling the public finances responsibly and would not for a moment mishandle the money earned by hard-working taxpayers,” Radičová said, as quoted by the Sme daily. “The trustworthiness of Slovakia is the most valuable thing that we have to offer.”

Of the 124 deputies present in parliament for the vote, only 55 voted in favour of the changes, with 60 – mostly opposition Smer MPs – abstaining and 9 deputies voting against. SaS’ 21 deputies did not take part in the vote, in which the government needed 76 MPs in favour to pass the changes.

The outcome made Slovakia the only eurozone country not to approve the enlargement of the bailout fund on the first attempt. With the government’s fate sealed, Smer and the three pro-EFSF coalition parties were quick to agree on the next steps: parliament on October 13 passed a constitutional law, using a fast-tracked legislative proceeding, to shorten the current election term in Slovakia and schedule an early election on March 10, 2012.

“Slovakia will ratify the bailout mechanism without any problems,” Fico said when announcing the deal. He had previously made clear he would support the EFSF only in return for an early election. He added that there was consensus among the parties that Slovakia must back such a mechanism in the eurozone.

Fico made good on his promise on October 13, when a second vote on EFSF enlargement passed by an overwhelming majority of 114 to 30. Regarding the functioning of the cabinet and parliament in the period before the election, Fico stated that Smer will “remain an opposition party until the very last day of this election term” and will not try to strengthen its position in parliament. The functioning of the cabinet is “an internal affair of the coalition parties”, Fico affirmed.

Shortly after the failed bailout vote, SaS and the other ruling coalition parties started offering their own interpretations of who was to blame for the government’s demise. While the Slovak Democratic and Christian Union (SDKÚ), Christian Democratic Movement (KDH) and Most-Híd all said that Richard Sulík’s SaS had brought it down, SaS blamed Radičová for making the EFSF vote a confidence issue and thereby raising the stakes so high. SaS' leaders also suggested that someone had pushed Radičová into the decision.

Sulík stated after the vote that he regretted that it had taken so long for his ruling coalition partners to realise that his party would keep to what he called its principled stand against the European bailout fund.

Marek Rybář, a political analyst from the political sciences department of Comenius University, told The Slovak Spectator that the two-in-one vote was a last-ditch solution since the ruling parties had been negotiating relatively intensively since May and that over the past three weeks some compromise solutions that would have allowed SaS to save face had been put on the table but were rejected.

“Linking the votes came as a last resort, when all the other possibilities were used up,” Rybář said. “I do not think that this was the reason why the government fell. The government could not have meaningfully existed while there were such fundamental differences, which would also be reflected in our public finances and our international obligations. Thus it was the last chance to force all the parties to support the bailout.”

Grigorij Mesežnikov, president of the Institute for Public Affairs think tank, said that the situation developed to a point where the prime minister considered it to be the last possible solution.

“Relations with SaS worsened to the point that she was not able to imagine that she would continue cooperating with the party that had refused to support such a significant issue,” Mesežnikov told The Slovak Spectator. “It is a problematic step, but understandable.”