NUMEROUS questions and concerns about the fall of Slovakia’s government on the evening of October 11 continue to linger in the autumn air, even after the eurozone bailout mechanism was approved by the Slovak parliament on October 13 with votes from the Smer party being provided in exchange for an agreement that an early general election will be held next March. 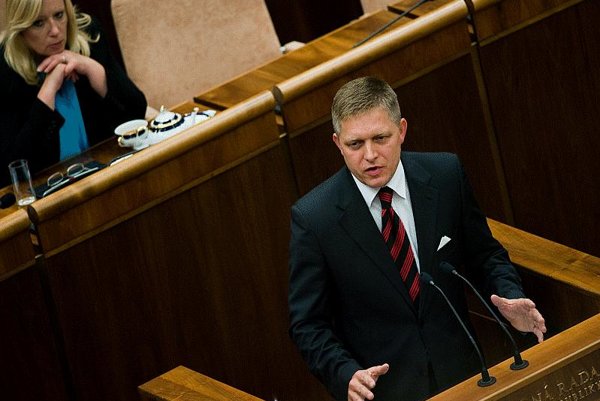 Robert Fico emerged from the EFSF vote as the political victor - at least for now. (Source: SITA)
Font size:A-|A+0

NUMEROUS questions and concerns about the fall of Slovakia’s government on the evening of October 11 continue to linger in the autumn air, even after the eurozone bailout mechanism was approved by the Slovak parliament on October 13 with votes from the Smer party being provided in exchange for an agreement that an early general election will be held next March.

Uncertainty is palpable but media and political analysts have been offering their opinions on the following kinds of questions: what does the future hold for Richard Sulík’s Freedom and Solidarity (SaS) party, blamed by both the opposition and its former coalition partners for bringing down Iveta Radičová’s government? Could any party even consider SaS as a coalition partner in the future? Does the fall of the government necessarily mean a return to power by Robert Fico and his Smer party? And what will Radičová’s place be in the emerging political environment?

Within hours of the parliamentary vote on the European Financial Stability Facility (EFSF), and in the days that followed, the three coalition parties that supported the plan agreed upon by European leaders in July – the Slovak Democratic and Christian Union (SDKÚ), the Christian Democratic Movement (KDH) and Most-Híd – made it clear that further official dealings with SaS will be limited, leaving the future of Sulík and his party somewhat uncertain.

“Politically, this party is practically in isolation,” political analyst Marek Rybář of the political sciences department of Comenius University in Bratislava told The Slovak Spectator, adding that he does not believe the party can easily find any other allies because it has lost its coalition partners due to its own actions but asserts that it has nothing in common with the two parties currently in opposition.

Political analyst Grigorij Mesežnikov of the Institute for Public Affairs (IVO) agreed that SaS has little potential as a coalition partner with other political parties.

“The issue of the bailout and issues that are linked with the situation in the eurozone will certainly be important for the next government and entering a coalition with a partner who has a clearly defined attitude on the issue that is unacceptable to its partners might be rather problematic,” Mesežnikov told The Slovak Spectator. “I do not think SaS will have open coalition cooperation with the three other centre-right parties. And SaS is an arch-enemy of Smer.”

Rybář also does not think it is likely that SaS can attract more voter support in the upcoming elections, arguing that the only issue the party is left with is that they are “the ones who have been against the loan” and Rybář doubts that a political campaign can be built on this issue alone.

The analyst added that even those voters who may have appreciated the Euro-sceptic talk coming from SaS will not vote for the party simply for that reason and polls showing a majority of Slovaks opposed to the eurozone support mechanisms are not a good gauge of voters’ perceptions of the issue.

“The fact is that people mostly did not know what they were talking about since the discourse was narrowed down to the claim that Slovakia was going to give money to the Greeks,” Rybář stated, emphasising his belief that the topic does not have the potential to help any Slovak political party to score points with the electorate.

Jakub Groszkowski, an analyst with the central European department of the Centre for Eastern Studies in Warsaw, noted that the mechanisms agreed upon by European leaders to protect the euro are not easy for ordinary people to understand.

“Richard Sulík made an effort to clarify that topic in Slovakia as well as in Germany, but it seems his approach towards the EFSF remained unclear,” Groszkowski said in an interview with The Slovak Spectator.

SaS is not alone in having its political future reduced to a big question mark. The prime minister of the outgoing government, Iveta Radičová, is also unlikely to be among those who will return to the most important positions in the government after the March elections. Some analysts even believe her future in her own political party, the SDKÚ, is in doubt.

For some time before the failed EFSF vote the media speculated about whether Radičová might seek to establish her own political party, particularly after she did not rule out such a possibility in an interview with the Trend economic weekly.

But Rybář said he cannot imagine Radičová establishing another political party at the moment and Mesežnikov refused to speculate about what might come next for Radičová, saying she had not transmitted any signals that would provide a clear idea about where she sees her own future or whether she might pursue another presidential bid in the future.

Her campaign for the presidency, against incumbent Ivan Gašparovič in 2009, garnered Radičová about a million votes and the possibility of another bid has been discussed by both the media and political analysts.

“Radičová has a very good chance of becoming the next president if she wants to continue in politics,” said Tim Haughton, a political scientist and visiting fellow at Johns Hopkins University’s School of Advanced International Studies in the United States.

Radičová’s position within the SDKÚ has been rather shaky throughout her term as prime minister, according to Slovak political analysts and the media.

Rybář noted that the reported tension between Mikuláš Dzurinda, SDKÚ’s chairman, and Radičová has not been resolved because neither of them expected Slovakia would be holding parliamentary elections before 2014.

“This suited both individuals,” Rybář stated. “Radičová focused on managing the government and Dzurinda on controlling the party and they did not have to resolve the issue. But this conflict will re-emerge very soon with early elections coming.”

Smer the winner for now

The parties of the defunct centre-right coalition are saddled with several difficult dilemmas to resolve before the election campaign starts next year, while Smer and its leader Robert Fico emerged from the political crisis as the unquestionable winners – as only with Smer’s votes could the EFSF legislation be passed in a repeat parliamentary vote, putting Smer in the driver’s seat to dictate how that would be accomplished.

The parliamentary elections now scheduled for March 10 next year are a clear opportunity for Smer to return to power given that the party has been polling well over 40 percent since the last elections in June 2010. Nevertheless, political analysts are reluctant to predict that Fico will resume the post of prime minister.

“It is of course a political victory for Fico but whether he is coming back as prime minister, I am not sure,” Mesežnikov stated, adding that his party might again win the most seats in the upcoming parliamentary elections but it could happen again that Smer cannot find a coalition partner or partners to secure a majority.

None of the three leaders of the SDKÚ, KDH or Most-Híd, speaking at a press conference on October 12 after the date of the next general election was announced, expressly ruled out future cooperation with Smer. Dzurinda responded that such a question was premature.

Mesežnikov noted that the situation could become very complicated because the three parties are not likely to seek a coalition with SaS after the election, adding that possible post-election configurations will depend on what political parties enter the campaign, how their campaigns resonate with the voters and whether new parties might be established between now and the election that could affect Fico’s level of support and ability to form a government.

Groszkowski, on the other hand, sees no other possibility than Fico’s return to power.

“Smer is going to compromise the centre-right coalition during the five months left until the elections,” he said, adding that Fico also might be able to take advantage of anti-reform sentiments that Groszkowski believes have developed recently in Slovak society.

The reluctance of the three centre-right parties to cooperate with SaS makes the return of Smer and Fico even more probable, according to Groszkowski.

“Every conflict among the centre-right political groups reinforces Smer,” he told The Slovak Spectator.

Groszkowski added that from the broader European perspective the current situation in Slovakia shows that there are no significant differences between the three former coalition parties and Smer in the arena of European and eurozone issues.

“For some Visegrad Group politicians, Robert Fico, with his clear support for the idea of further EU integration, might be a better political partner as prime minister than a right-wing politician with inconsistent support in parliament,” Groszkowski stated.