AS FAR as the Slovak media was concerned, Iveta Radičová had maintained silence since her speech to journalists just after parliament’s no-confidence vote brought down her government on October 11. 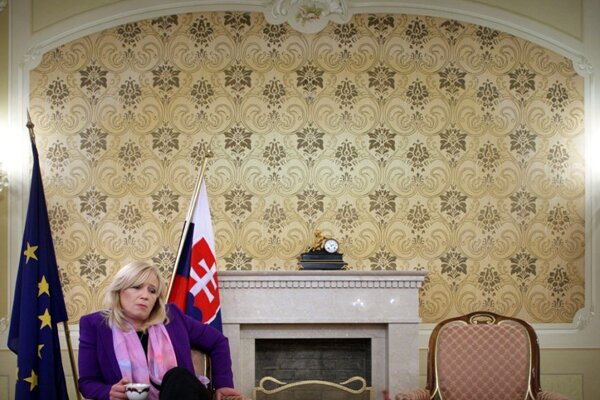 AS FAR as the Slovak media was concerned, Iveta Radičová had maintained silence since her speech to journalists just after parliament’s no-confidence vote brought down her government on October 11.

“It was my duty to focus all my energy and skills on improving the image of Slovakia and strengthening faith in our trustworthiness,” she said in an interview which she gave to the Sme daily one week after her government’s fall, to explain why she devoted the time immediately after the bailout vote to foreign media rather than local journalists.

Radičová answered several questions concerning the fall of her government and her relations with Freedom and Solidarity (SaS) politicians, the only members of her ruling coalition not to vote in her favour in the parliamentary vote. But she left many questions unanswered, particularly those concerning her future on the Slovak political scene.

Who will go to the summit?

One of the most pressing questions Slovakian politicians must answer is who will represent their country at the summit of eurozone leaders taking place in Brussels this weekend, October 22-23. As it stands, Radičová is still de jure Slovakia’s prime minister and so she should remain the country’s representative at the summit, but the situation could change if President Ivan Gašparovič dismisses her cabinet after his meeting with parliamentary parties’ leaders scheduled for October 20.

Radičová stated in her interview that she has spoken to the Slovak ambassador to the EU, the Council President Herman van Rompuy, and the EC President Jose Manuel Barrosso.

“They regard my presence [at the summit] as a matter of course,” Radičová told Sme. “I cannot really imagine how my absence would be explained.”

There have been some hints, particularly from President Gašparovič and from the opposition Smer leader Robert Fico, that the president could replace Radičová in this task and attend the summit himself. Radičová asserted that the eurozone negotiations are led exclusively by prime ministers, that their posts are not replaceable and that no other official is allowed to the meetings.

“The working language is English, and there is the option to use French, German, or Spanish, which are translated into English,” she said. “It is always conducted on the level of prime ministers, with the exception of France where the president fulfils different functions.”

Radičová refused to comment further on the issue. But it is generally known that President Gašparovič always uses English interpreters.

Why government is needed

Radičová affirmed that she is ready to lead the government until the March 2012 elections. She made it clear that there are three main tasks facing the interim government, regardless of who will be at the head of the cabinet: to participate in the negotiations in Brussels, where leaders of the eurozone will talk about the regulated default; to pass a state budget with saving measures, since a stopgap budget would result in a higher deficit; and to prepare anti-crisis measures.

“Whatever the president and leaders of the parties agree, the cabinet must perform these three tasks until March 10, whoever will sit there [in the cabinet],” she said. She added that appointing a new cabinet which would have to go through a parliamentary confidence vote “is not a stabilising element”.

“SaS applauded, and brought down the government”

Regarding the conflict within the ruling coalition over the euro bailout scheme, Radičová said that although she tried until the very last moment to reach a compromise, she understood that it wasn’t a one-shot game. Even if a compromise could have been reached, she continued, there would already be another conflict coming up this weekend, and still more to come in the coming weeks.

“It was permanent [conflict],” she said. “The conflict was so principle-based, that the government fell. The conclusion is that I do fully realise my responsibility.”

Radičová also said that analysing who is to be blamed might be an issue for the election campaign, but it is of no importance regarding the fact that the government fell.

“It is important from the viewpoint of Slovakia’s trustworthiness,” she said. “For the world and Europe I wasn’t a disappointment and I didn’t fail. Just the contrary. Abroad it is regarded a statesman’s approach.”

The day before the vote, following the last coalition session on Monday October 10 in which the SaS had refused to compromise, Radičová was already aware that her government would fall. Despite this, she described the moment after the vote in a very emotional way.

“After my final speech SaS applauded me and then brought down the government,” she said. “That’s the reality. If it was up to me, I would have cried… But I cannot afford that. The world doesn’t like tears. So the expression on my face was a fight against tears. More or less successful.”

Radičová admitted that although all communication with SaS ministers and with the party leader Richard Sulík has always been correct, it will probably take some time before she is again able to talk to him face to face. Sulík is very unyielding, she repeated several times.

“And that’s a serious problem in politics,” she said, adding that Sulík often used his right to veto proposals at the coalition council and refused further talks, which has been frustrating for the other partners.

“Solutions and politics are not only about a calculator,” Radičová remarked. “I do not think that a compromise is immoral and I do not think that every principle-based approach is the right thing to do regarding the future of Slovakia.”

Radičová avoided talking about her future in her party, the SDKU, and in Slovakian politics. She was only sure to refuse to participate in any government involving Robert Fico.

“When I hear what Fico is capable of, I’m amazed,” she said. “Who is this politician that without any scruples left the country with an 8-percent deficit two years in a row? And then he uses lies as a working tool?”

She said that although in 2006 she wasn’t completely opposed to the idea of ruling with Fico’s Smer, after her experience of him in the prime-ministerial chair she no longer finds such a possibility acceptable.