WINTER is a very unusual season for Slovaks to be viewing billboards with party slogans or watching sharply-drawn political debates on TV. Nevertheless, after the fall of the four-party coalition government on October 11 the leaders of Slovakia’s political parties agreed that the next parliamentary elections would be held in March, perhaps before the last snow melts even in southern parts of the country. 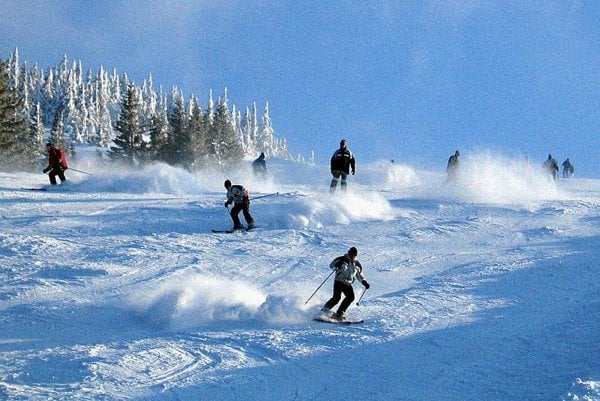 Politicians might take to the slopes to reach voters. (Source: SME)
Font size:A-|A+0

WINTER is a very unusual season for Slovaks to be viewing billboards with party slogans or watching sharply-drawn political debates on TV. Nevertheless, after the fall of the four-party coalition government on October 11 the leaders of Slovakia’s political parties agreed that the next parliamentary elections would be held in March, perhaps before the last snow melts even in southern parts of the country.

Slovaks will be asked to cast their ballots on March 10, less than two years since the last parliamentary elections. When the date was announced some voices argued that the winter months are less suitable for political campaigning than other seasons and that the late winter balloting, the first in the country’s history, might influence voter turnout and in the end, the results as well.

Winter months in Slovakia are usually filled with various social events, starting with Halloween parties in late October, St Nicolas parties for children in early December soon followed by Christmas and New Year’s Eve events, and ending with carnival days filled with balls which culminate next year on February 21. Another calendar highlight of the official election campaigning could be International Women’s Day on March 8, only two days before the vote. On that day, politicians, mainly from the Smer party, have traditionally held events for women featuring cultural programmes and gifts for the guests.

Given that Slovakia has no historical experience of having an election at this time, it is difficult to predict what impact it might have on voter turnout and actual results, sociologist Martin Slosiarik from the Focus polling agency told The Slovak Spectator.

“Obviously, the political parties will have to adjust their campaigning to the period when the elections take place,” Slosiarik told The Slovak Spectator, adding that while much will depend on the actual weather it is very likely that there will be no large, lengthy meetings in the squares of Slovak towns and that smaller encounters, with mulled wine or on ski slopes, can be expected.

“It is definitely an unfortunate date but all the parties will have to adjust to it,” Ján Baránek of the Polis polling agency told The Slovak Spectator, noting that many traditional campaign methods might not work well in the winter season and that the parties will be forced to use alternative methods.

“It’s a good opportunity for them to make use of virtual space,” Baránek said, citing the example of Freedom and Solidarity (SaS), which intensively communicated via the internet, blogs and various social networks prior to the 2010 elections.

Social networks, blogs and the internet will play an important role in the 2012 campaign, Slosiarik agreed.

“But that doesn’t mean the parties will completely give up their billboard campaigns because
that is important too; they need to make themselves visible,” Slosiarik stated.

Several months remain before the official campaign period starts but unofficial campaigning began essentially the day after the fall of the government. The fact that the parties recognise a need to ‘be online’ and to communicate with their supporters was illustrated by the numerous blogs and posts on social networks in which politicians explained their positions on the euro bailout mechanism and blamed each other for the fall of the government. Even Ján Slota, the chairman of the nationalist Slovak National Party (SNS), has started a blog even though he has not previously used this method of communication.

Even though the internet might be of more importance in the 2012 elections, the success of the parties will not depend entirely on how skilled they are in this area since each party must adjust its communication style to different kinds of voters.

“It would be useless for a party to communicate only on the internet if 80 percent of its [traditional] voters do not have internet access or do not use the internet at all,” Slosiarik said, noting that while SaS can count on more success in using the internet, the Christian Democratic Movement (KDH) must take a different approach involving a more standard face-to-face campaign.

Slosiarik added that face-to-face meetings with voters are a very powerful campaign tool whose value should not be underestimated.

“Sometimes it works in a peculiar way. You might think that a certain political party has no support in a little village somewhere in Slovakia but the sole fact that a politician of that party appears there in person can harvest some votes just because the people appreciate that he or she left Bratislava and came to meet them in person,” Slosiarik said.