The battle to pass the budget

PASSING a state budget when there are fears of a new recession and there is a need to bring the public finances into balance is a thorny undertaking, even for a well-functioning government. Now Slovakia’s outgoing government, which collapsed under the weight of a two-in-one vote on changes to the eurozone bailout scheme and confidence in the cabinet of Iveta Radičová, is attempting to pass its budget plan in parliament so that the state will not need to operate using a provisional budget in 2012. 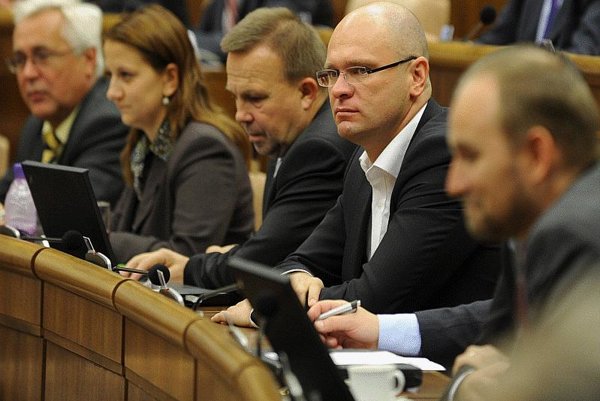 PASSING a state budget when there are fears of a new recession and there is a need to bring the public finances into balance is a thorny undertaking, even for a well-functioning government. Now Slovakia’s outgoing government, which collapsed under the weight of a two-in-one vote on changes to the eurozone bailout scheme and confidence in the cabinet of Iveta Radičová, is attempting to pass its budget plan in parliament so that the state will not need to operate using a provisional budget in 2012.

While the centre-right parties which shared power for the past 16 months all say that they are committed to approving the budget plan, it appears that actually passing the laws required for meeting the budget targets for next year will not be easy.

One piece of legislation that would have brought additional revenue to the state was struck down on October 19 when five MPs from the Freedom and Solidarity (SaS) party failed to support it. Party leader Richard Sulík said the failure to vote in favour had happened by mistake. It was SaS MPs refusing to support the proposed changes to the European Financial Stability Facility (EFSF) on October 11 that led to the fall of the government in which SaS was a member.

Opposition party Smer has said that it will not lend its support to the budget package in parliament even though its leader, Robert Fico, also said that having an approved budget is better than going into next year with just a provisional budget.

If the Slovak Democratic and Christian Union (SDKÚ), the Christian Democratic Movement (KDH), and Most-Híd party pass the budget with the help of SaS deputies, Fico has nevertheless said that the budget priorities will change if Smer is returned to power in the March elections.

Smer has stated its opposition to the changes proposed by the Finance Ministry to the way local and regional governments would be financed in the future. Smer, as the largest party in parliament, has said it favours a new tax on banks as advanced by the coalition, but Fico wants to see the levy tripled from what parliament approved on October 20, a special tax calculated on 0.4 percent of a bank’s liabilities, less the bank’s equity capital and its deposits covered under Slovakia’s depositor protection system (see story on pg 1).

Parliament made an attempt to override a presidential veto on a revision to the law on construction savings accounts which would have brought additional annual revenue of €33 million to the state beginning in 2013 by reducing the bonus that the state pays to those saving for a home from €66 a year to €15 a year, tied with a reduction in banking fees associated with the savings programme.

Sulík responded to the failed vote by saying, “Sometimes shit happens,” in English, as quoted by the SITA newswire, to explain the votes of the five deputies from SaS. “We are very sorry about it. We will seek an agreement with the finance minister on how to solve the shortfall it causes.”

Sulík insisted that the failure of five SaS deputies to vote for the override was not intentional. Parliament must now wait six months before it can try to override the presidential veto again.

“During the demanding political negotiations about the future form of state support for construction savings, SaS repeatedly raised the issue of completely cancelling the subsidies [for these savers],” said Martin Jaroš, spokesman for the Finance Ministry, adding angrily that “today’s vote in parliament, when the presidential veto was not overridden due to the actions of some deputies from this party, shows how [poorly] SaS observes its principled approach”.

The Sme daily reported on October 19 that Fořt, who had supported the legislation in its initial vote, said that at that time he did not want to undercut the fragility of the governing coalition but that “under the current conditions, professional arguments prevailed”. The daily also wrote that until 2010 Fořt had worked as a manager at one of the construction savings institutions in Bratislava. The SaS MP claimed that this did not influence his vote.

The Finance Ministry also recently proposed a change in how Slovakia’s local and regional governments would be financed in the future, arguing that in challenging economic times all recipients of public finances, including municipalities, should tighten their belts. Smer reacted by calling the ministry’s plan only a piece of paper based on incorrect assumptions and demanded that the proposal be withdrawn from parliament.

The proposal presented by Finance Minister Ivan Mikloš would no longer fund municipal governments solely by revenues coming from personal income taxes but beginning next year through a mix of taxes: personal and corporate income taxes, value added tax and excise taxes. Smer argued that the ministry is only seeking to channel funds from municipalities to the state and Smer MP Ľubomír Petrák asked on October 18 that the draft be withdrawn from parliament’s agenda.

The Association of Towns and Villages of Slovakia (ZMOS), which represents 96 percent of the country’s municipalities, called for preservation of the current financing system based solely on personal income tax. ZMOS further argued that revenues are distributed fairly among towns, villages and regional governments under the current system.

The Union of Towns of Slovakia (ÚMS), another body representing local governments, has said that it understands the macro-economic problems of the state and does not deny the need for local governments to participate in their resolution. But Marián Minarovič, secretary general of ÚMS, told The Slovak Spectator that his organisation also thinks the proposed changes will negatively impact local governments.

Mikloš, supported by the ruling parties, has argued that the current financing model for local governments is unsustainable, but also added that his proposed plan would likely provide 3 percent more for municipalities in 2012 than they will receive this year.

“The basic point of the proposal is that while local governments currently have been getting 93.8 percent of the income tax paid by individuals, as of next year they would be getting 12.97 percent of all tax revenues, the so-called 'tax mix',” Mikloš stated, as quoted by SITA. “The method of calculating tax revenues [going to municipalities] changes, yet nothing really changes in the fiscal decentralisation principle.”

On October 20 parliament adopted several changes to locally-based taxes that, among other things, will unify tax reports for various local taxes that are assessed on an annual basis, such as taxes on real estate, domestic pets and vending machines.

Smer announced that if it is successful in the March 2012 parliamentary elections it will modify what it called “non-systemic tax changes adopted by the outgoing government”.