IT IS said that budget airline SkyEurope taught Slovaks to fly. In the early 2000s the now-defunct low-cost carrier showed Slovaks, who were then enjoying the fruits of their nation’s rapid economic growth, that an air ticket did not need to cost a fortune and helped to make air travel a much more popular means of transport. However, the economic crisis helped push SkyEurope and other airlines from the Slovak skies and hit the domestic air transport sector hard. 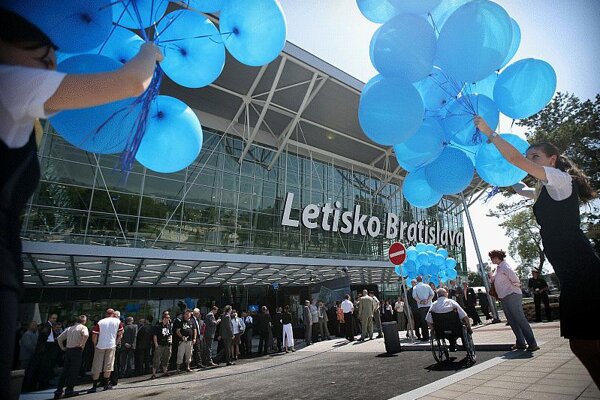 IT IS said that budget airline SkyEurope taught Slovaks to fly. In the early 2000s the now-defunct low-cost carrier showed Slovaks, who were then enjoying the fruits of their nation’s rapid economic growth, that an air ticket did not need to cost a fortune and helped to make air travel a much more popular means of transport. However, the economic crisis helped push SkyEurope and other airlines from the Slovak skies and hit the domestic air transport sector hard.

“Air transport, as one of the little-number sectors, is very closely linked to economic growth,” Antonín Kazda, head of the Air Transport Department at the University of Žilina, told The Slovak Spectator as he explained the current challenges facing the air transport business. “Business air travel is directly linked to the growth of the economy and leisure air transport or package tours are luxury products, and therefore one of the first items to be deleted from the family budget. The challenge of all airline companies in Europe now is to survive and many airline companies that have not managed their finances reasonably or did not create reserves over the summer will not live to see the spring.”

In terms of passenger air transport, Bratislava Airport accounts for the country's biggest share. But despite some positive developments, such as the launch by Czech airline ČSA of a base in Bratislava earlier this year, the airport reported a drop in the total number of passengers it handled and the number of take-offs and landings this year compared with the first half of 2010, according to Kazda. The only increase was in the area of charter flights. Domestic air transport (from Bratislava to Košice) also registered a significant fall, by 22 percent.

Bratislava Airport believes finding a concessionaire to lease the airport is its biggest current challenge. The Transport Ministry is now selecting an adviser for the process, which should then find an investor to lease what is the country’s biggest airport by summer 2012. According to the current plan, the concessionaire will be offered a contract to operate the airport for 30 years.

Another challenge Bratislava Airport faces is the current economic situation.

“We continue to feel the consequences of the current economic situation – the fluctuating euro, companies’ ongoing problems, reduced household budgets and the resulting lower interest in flying,” Dana Madunická, spokesperson of Letisko M. R. Štefánika – Bratislava Airport, told The Slovak Spectator. She added that companies are using new technology to save on corporate travel and households are more cautious with their spending and tend not to go on weekend breaks or second or third holidays. “So probably the second biggest challenge we face is to revive interest in flying, of course with the help of other parties involved in tourism, so as to return to the level from 2008, when our airport served over 2.2 million passengers [compared to 1.67 million in 2010].”

Assessing the performance of Bratislava Airport, Madunická said that in spite of the factors she outlined, the airport had just experienced its most successful half-year since the departure of several significant carriers (SkyEurope, Seagle Air, and Air Slovakia) from the market. Apart from a 16-percent increase in cargo transport, which she described as a historical success, Madunická highlighted the arrival of two new carriers with almost 30 new routes per week.

“At the beginning of the summer season, ČSA connected Bratislava with almost the whole world,” Madunická said, adding that Bratislava had direct flights to European hubs such as Paris, Rome, Amsterdam, Barcelona, Larnaca and Brussels during the summer season. “The arrival of traditional Russian carrier UTair Aviation with a daily flight to Moscow’s Vnukovo airport proves that the airport in Bratislava cannot be labelled ‘low-cost’.”

Irish budget airline Ryanair has maintained its most popular routes from Bratislava and added flights to Gran Canaria, which according to Madunická are popular not only among Slovaks but also Austrian and Hungarian passengers.

Ryanair remains the biggest carrier operating out of Bratislava. Between January and September it carried 797,700 of the airport's total of 1.32 million passengers, based on data from the airport’s website.

A bigger range of destinations and more frequent flights may help Bratislava Airport to retain business clientele, as in the past such passengers have tended to leak away to Vienna.

“Especially in the sector for scheduled flights, most business passengers do not have any other alternative but to fly from Vienna,” said Kazda. “Apart from the direct connection, a business passenger also prefers more daily connections to a destination, while the price of the ticket is not always the most important factor.”

Having most of its scheduled routes operated by Ryanair puts Bratislava at a disadvantage compared to Vienna when it comes to attracting lucrative business travellers, Kazda said.

The growth in charter flights – up by 15 percent year-on-year during the summer July-August season – gave Bratislava Airport a very positive surprise, according to Madunická.

Apart from extending the list of destinations offered from Bratislava the airport is constructing the second part of its terminal, with plans for it to be completed in June 2012. This €96-million project will increase the annual capacity of the airport to 5 million passengers. The first part was opened in June 2009.

Bratislava Airport is also preparing, in cooperation with global logistics company DHL, the construction of a ground base for servicing air shipments to Slovakia, the Czech Republic, Austria and Hungary.

Bratislava is not the only airport in Slovakia to see the arrival of new airlines. As of December 8, Polish airline Eurolot will add two regular routes, to Gdansk and Warsaw, to the one route currently operated from the Poprad airport, Letisko Poprad-Tatry, by ČSA to Prague. The SITA newswire reported on October 17 that these should serve Polish tourists heading to the High Tatras for skiing, but there is also a plan to keep the routes in summer in order to take Slovak tourists to the Baltic coast. The Poprad airport also hopes to attract winter charter flights from Ukraine and Russia.

Košice Airport agrees that the current economic situation is having a direct impact on air transport and the introduction of new routes.

“Basically, it is not such a problem to open a new route, but it is very complicated to keep the route from the viewpoint of occupancy rates,” Marta Horváthová, a member of the board of directors of Košice Airport, told The Slovak Spectator. “This is also why airline companies are being extraordinarily cautious when expanding."

According to unofficial information, Košice Airport served 266,000 passengers in 2010, a drop of over 24 percent, the SITA newswire reported in early September. The airport reported its biggest number of passengers, almost 591,000, in 2008, but has not released official figures for 2010, according to SITA.

With regards to the main challenges facing air transport, Horváthová and Tomáš Jančuš, another member of Košice Airport’s board of directors, told The Slovak Spectator that airline companies and airports are often key actors in the economy of the region in which they operate. Making more remote regions accessible via air transport enables the development of tourism and enhances the local economy’s performance. Air transport follows international rules and regulations which airports as well as airline companies have to meet. This requires extensive investment by both airports as well as airline companies. At the moment pressure from competition is having a direct impact on the prices that can be charged and thus the return on investment is long, according to Horváthová and Jančuš.

Slovakia does not have any national carrier, but Kazda does not see this as a problem. A new carrier, Slovakian Airlines, plans to launch operations by the end of this year, adding to a group of local companies that includes Air Transport Europe, VR Jet, Opera Jet and others.

“Under the current deregulation of air transport the term ‘national carrier’ is obsolete,” said Kazda, adding that most former ‘national carriers’ are loss-making. Thus he believes that the arrival of any carrier in Slovakia and the courage of any investor willing to develop the local market should be welcomed.

Kazda highlighted three basic factors for an airline company to be successful: the market, financing, and the internal system of the company.

“The growth of air transport in Slovakia stems, as in other countries, from the ‘richness’ of the nation, and rises along with GDP per capita,” Kazda said. “Thus, until Slovaks get ‘wealthier’ the market will not be interesting. On the other hand, insufficient or poorly accessible networks of scheduled routes covered by ‘traditional’ airline companies created opportunities for the launch of companies in the business jet segment.”

Kazda believes that a ‘decent’ airline with a base in Bratislava might revive the Slovak market.

“A carrier with a base providing scheduled transport for a reasonable price to a sufficient number of destinations would fit the profile of the Slovak passenger and his or her needs the most,” said Kazda. “Simultaneously it should be a contribution for Bratislava Airport. Thus, Ryanair is not the best solution. A ‘decent’ low-cost airline company with a model similar to Air Berlin, Norwegian or Niki, with its main base in Bratislava might be able to revive the market. But I consider political influence and interference in the air transport market to be the main problem of Slovakia.”