A dancer’s body is their laboratory

THE 15TH YEAR of the Bratislava v pohybe (Bratislava in Movement) festival of modern dance was marked by the themes of individuality, solitude, uprooting and human communication, or the lack thereof. From the very first performance, which in fact consisted of two pieces, Krv a Kráľ (Blood and King), and Mono, by Debris company – to the last show, Cesta domov (Journey Home) by Les SlovaKs, a Slovak–Belgian ensemble, these aspects were at the core of the artistic interpretation by individual companies and artists at the festival. 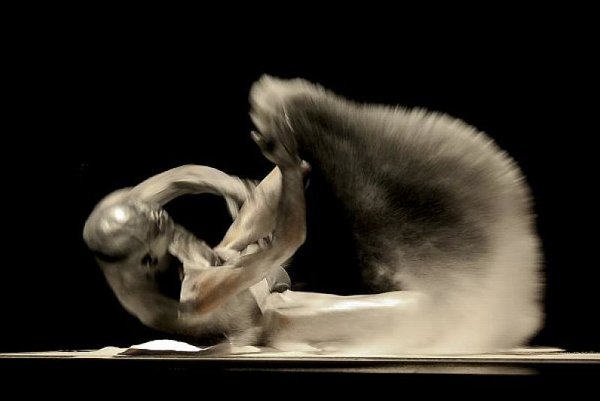 THE 15TH YEAR of the Bratislava v pohybe (Bratislava in Movement) festival of modern dance was marked by the themes of individuality, solitude, uprooting and human communication, or the lack thereof. From the very first performance, which in fact consisted of two pieces, Krv a Kráľ (Blood and King), and Mono, by Debris company – to the last show, Cesta domov (Journey Home) by Les SlovaKs, a Slovak–Belgian ensemble, these aspects were at the core of the artistic interpretation by individual companies and artists at the festival.

The performances took place between September 29 and October 7 in Bratislava, mostly in the T&D House, but also in other venues, including on the streets of the capital. The festival offered a host of individuals and ensembles from both Slovakia and abroad focusing on modern dance and – a strong motif this year – physical theatre.

An audience-puller was the first presentation of Japanese Butoh dance in Slovakia, complete with a lecture, two workshops, the screening of a documentary and a tasting of Japanese food. Butoh is a modern dance, a reaction to the strict rules in both society and traditional Japanese culture, which appeared after World War II.

“What John Cage’s revolutionary composition was for music, Butoh has become for the form of dance,” dancer Ko Murobushi said in his Bratislava lecture. (Cage is perhaps best known for his 1952 composition 4’33”, the three movements of which are performed without a single note being played. The content of the composition is meant to be perceived as the sounds of the environment that the listeners hear while it is performed, rather than merely as four minutes and 33 seconds of silence.) The first recognised Butoh piece, Kinjiki (Forbidden Colours) by Tatsumi Hijikata, was premiered at a dance festival in 1959. Another renowned and famous Butoh dancer and choreographer was Kazuo Ohno. Butoh has been both hailed and banned, misunderstood and well-accepted at the same time throughout its history. Murobushi, respected as the inheritor of Hijikata’s original perception of Butoh, said this style can be taken as physical theatre or a way of expressing oneself rather than as classical dance.

“The movement comes rather from within the body than from outside,” he said, adding that there are several different directions in Butoh itself. “Some include specific moves and poses, but it is not so much about technique. Hijikata used to change his way, his style, his history. And he wanted his students to make their own explorations, research and experiments. Students should find out that their own body is something like a laboratory; they must very sensitively find their way of researching. I think performances of those who still use his choreography in an unchanged version are more for show and to me it seems this is not Butoh anymore. The true Butoh dance, fast, experimental, is gone. But of course, there are many ways of understanding it.”

It is even hard to define Butoh and pinpoint what is Butoh and what is not, so much is this style about freedom and expression from inside towards the outside world.

“Butoh works even outside Japan, and I hope some European contemporary dancer comes to learn and likes this dance, can have a good influence and can help spread it. In Japan, the situation is complicated. Butoh is a contemporary dance, but not so fashionable anymore; and it does not have a big audience. I tend to perform in small theatres,” Murobushi told The Slovak Spectator. “To speak about inspiration, it comes when there is a flash-like moment, an exchange of energies, but sometimes a crisis is the best motivation and inspiration. The body reacts best and in the most spontaneous way when in crisis. And I mean a purely bodily crisis, not emotional, as emotions are rather systematic and have their own code, type of reactions, etc. But in dance – if you need a good, strong result, you must jump to meet your own crisis.”

The advantage of dance and physical theatre is that it can be imported and exported duty-free and foreign artists and shows need no interpretation or translation, the composer of the music for Mono and its director, Jozef Vlk of the Debris company, said. Thus, foreign performances at the Bratislava in Movement festival can become a great inspiration for domestic ensembles, and vice versa. He added, however, that any festival’s potential is measured by the ratio of how much money it can get through fundraising and how much quality it is able to bring for this money. To become truly established at a European level, any festival of contemporary dance would now need a great deal of money and also strong support from state cultural authorities, according to Vlk.

About Mono, he said: “It is physical theatre rather than dance; and it is a piece about self-love which is, in a way, just one of the forms of love. It gets problematic only when there is too much of it; then it becomes narcissism. Narcissism is an ancient phenomenon, but it has survived until modern times. Its current form, more sophisticated than the mythological adoration of one’s own reflection in water, has been at the core of our research. The current Narcissus is more sophisticated, more civilised – and in Mono, there are five of them, each affected in a different way, unable to communicate with others, to see them and their needs. Narcissism influences our whole society, and we are all deformed by it, we live it, we even dream it at night.


So we, in Mono, ask also to what extent current art is narcissist